I wrote it as a gift to myself, says Ruskin Bond

Looking for the Rainbow is a fine balance of enthusiasm, innocence, pain, loss and grief. 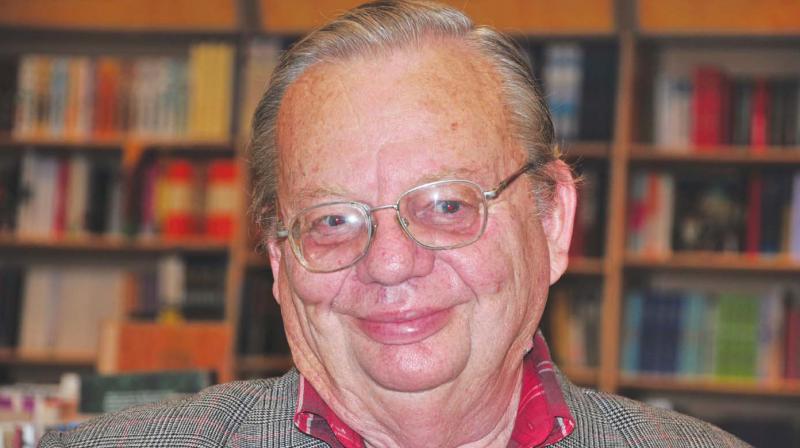 Sometimes memory improves with age! It isn’t all forgetfulness and muddle. As I sit here, soaking up the mellow spring sunshine, the distant past looms up before me, and I remember things I thought I had forgotten. Most of all I remember my father — ‘Daddy’, as I always called him.”

Ruskin Bond’s latest book, Looking for Rainbow: My Years with Daddy, is a personal account of the author’s memorable time that he spent with his father in Delhi of the 1940s. Bond talks of how he came to live with his father for two years after his parents separated.

Even after 70 years, Bond remembers those two rembarkable years of his life and owes much to these years for it was his father who devoted all his spare time to his son. He introduced him to reading books, newspapers and grand opera. He opened up his collections of stamps, which increased Bond’s general knowledge despite not attending a regular school.

“I often comtemplated to write maybe an essay within the context, but I felt that I owe this much to Daddy so as to devote a complete story to him...”, says Bond. “I am pretty ancient so I wanted to write this story before I leave.... It is a tribute to my father”, he further explains over a phone call.

Bond begins with how he looked forward to spending time with his father as he was bored with a strict disciplined life of a convent and more so of its tasteless food, which often included cabbage soup and boiled meat.

New Delhi in the summer of 1942 meant freedom for this  boy who would gorge on the sumptuous breakfast made by Daddy — freshly whipped cream made into butter, half-boiled eggs, sausage, jam and tea with condensed milk.

It also meant walking the streets of Delhi, exploring the Purana Qila and understanding the political atmosphere of that time.

Bond deftly gives us a peek into the Delhi of 1940s. Occasional visits to Wenger’s confectionary, watching Hollywood films at Connaught Place, arranging stamps with his father was what kept him busy. While giving these details, Bond is not sceptical of his readers judging him. He keeps the simplicity intact and even confesses, “I was a greedy little boy”.

Such candour wins our hearts and compels us to read on as his friend.

I find echoes of Mark Twain’s Adventures of Tom Sawyer and Adventures of Huckleberry Finn in this book as if Bond was marooned on this island where he was set free.

Bond agrees. “I am such a bookish boy, I read David Copperfield...my hero was, in a way, William, the wicked”, says Bond.

Bond deliberately keeps the tone light with his humour in this book. When asked why he didn’t play with the boys on the streets, Bond replied to his father that they call him “Tandoori Ruskin” or “Lal Bandar”.

He is also conscious of the class divisions that pervaded those times. He’s scolded by the neighbours for playing with a sweeper’s son.

Bond explains, “You had, apart from the English-educated middle class, upper class and the working class. It was a period of transition”.

This was also the time that made Bond independent. When his father was hospitalised, Bond spent two-three days all by himself. The time passed quickly and one day Daddy decided to send Bond to a boarding school in Simla due to his impending transfer. Bond protests but agrees.

School life in Simla was full of quirky characters — the headmaster and his wife, who insisted on playing a broken violin and piano respectively, senior teacher Mr Oliver who lived with his pet. Bond’s life was pacy with attending school, singing in the choir, playing with his friends Bimal, Bambi and Riaz and reading his father’s letters and colourful postcards .

Bond was busy making plans of holidays, the next term and future when the news of his father’s death was broken to him.

Bond’s honesty is touching when as a kid he gets angry at God as to why He needed his father.

“We had been taught God was a loving, merciful being, and here he was doing cruelest possible thing to a boy. Why did he need my father? What could he possibly want him for? Did he want his stamp collection?”

Bond doesn’t want sympathy of is readers. He’s stating things and feelings as it happened and as he experienced.

“I didn’t want to escape from it or from anybody... It’s there and it’s done”, says Bond.

Neither he shies away from exposing himself. He was going to his mother and stepfather and the future looked bleak. Yet, Bond ends the book on an optimistic note. It is holiday time and the tiny train is full of boys singing:

“Bye-bye rainy day, bye-bye snow
We are on our way — here we go
Rolling round the world, looking for the rainbow
We know we’re going to find some day!”

Looking for the Rainbow is a fine balance of enthusiasm, innocence, pain, loss and grief. Bond bares his heart out to the readers without craving for sympathy. He doesn’t build walls around him or is apologetic about the way he behaved as a boy.

“I am a dreamer and want to leave my mark on sands of time. Writing was the best profession to suit me,” says Bond .

Those two years were crucial for Bond as it prepared him for the life ahead “when I had to stand on my feet”. Bond has given a gift to his readers, kids and adults alike for they get to know their favourite author closely.