Idolising hagiography that fails to take off

This book, in particular, reads like a public relations job. 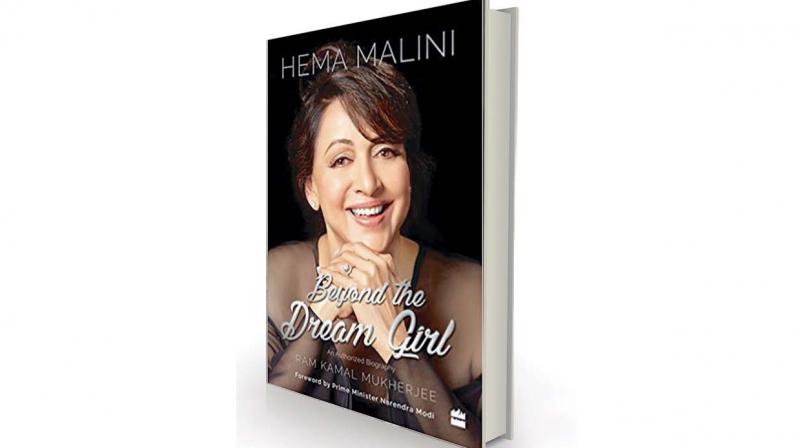 Hema Malini made her acting debut in a supporting role in a Tamil film at the age of 15 but her career did not take off then. She was lucky to be spotted a few years later by another producer during a stage performance. Her mother was keen that she works in films but her father had many misgivings. The producer persuaded the family to travel to Bombay (now Mumbai) where, after a successful screen test, Hema was cast in Sapnon Ka Saudagar opposite Raj Kapoor.

The 1968 film flopped but “The Dream Girl” got noticed and went on to act in over 100 films. Her last major role was in Baghban (2003) opposite Amitabh Bachchan. The film was about parents neglected by their grownup children and it allowed Hema to retire from movies on a high note.

Hema Malini has had a long and successful career: she was much admired in the film industry for her grace and professionalism. However, in almost all her films, it was the hero who had the central role and she was cast as his love interest. Public adored her but the critics never really took to her. One of the few films that she carried alone on her shoulders and succeeded was Seeta aur Geeta, the female version of an earlier film, Ram aur Shyam. It was a story of identical twins separated at birth, one growing up servile and timid, the other fearless and assertive. It won her the only best actress award from Filmfare magazine. That was in 1972 and the jury is still out on whether she deserved it more than Meena Kumari for Pakeezah. There were a few other films in which she had the prominent role but they did not fare well at the box-office. Kamal Amrohi’s Razia Sultan was an absolute disaster, a butt of many jokes. The high-flown Urdu dialogue went completely over the heads of the audience. She had plum parts in Gulzar’s Meera, a film on the life of poet-saint Meerabai, and Ek Chadar Maili Si, based on Rajinder Singh Bedi’s acclaimed novel of the same name, but both these too failed at the box office.

Hema’s name will always be associated with Sholay in which she gave a gutsy performance as the taangewali. But here she played fifth fiddle to male actors who dominated the film: Dharmendra, Amitabh Bachchan, Sanjeev Kumar and Amjad Khan. She had barely six scenes. “This isn’t your film. This is Thakur and Gabbar’s film. But your role will be very interesting,” Ramesh Sippy, the director, had assured her. He had earlier directed her in Seeta aur Geeta. Johny Mera Naam was another big hit but Dev Anand had a meatier role.

It was not Hema’s fault that she achieved stardom at a dreadful juncture of Indian films. In the 1970s and 1980s, the muses were in retreat. The great filmmakers of the golden era, who had brought out the best in actresses, such as Mehboob Khan, Bimal Roy and Guru Dutt, were no longer around.

This low period in our films was the result of the lamentable state of our single-screen cinema halls, rat-infested, with torn seats and smelly toilets. The all-male crowd with macho tastes had taken them over and the middle classes preferred to stay in the comforts of their homes and watch pirated videos. Some good films like Raj Kapoor’s Henna and Gulzar’s Lekin (in which Hema had a small role) suffered as a consequence. It was some years before things changed for the better with the arrival of state-of-the-art multiplexes in swanky malls.

Authorised biographies are difficult to pull off since the subject of the book has the final say on what goes in and what skeletons are best left in the cupboard. This book, in particular, reads like a public relations job. A large chunk is based on interviews conducted by the author with Hema Malini. Mr Mukherjee takes everything she tells him as gospel truth. In short, Hema Malini: Beyond the Dream Girl, is a hagiography, an idolising biography where the subject is treated with more reverence than is necessary. A more candid biography would have been an interesting read.

By all accounts, Hema Malini is one of the nicest persons to have graced our film industry. She was well-liked and got on splendidly with her co-stars with the exception of Rajesh Khanna whom she found quite unpleasant. Since her retirement from films, Hema has kept herself busy working in television serials, both as an actor and director. She is a trained classical dancer and her solo performances and ballets on stage continue to draw crowds.

As a member of Lok Sabha, elected from Mathura, she takes her parliamentary duties seriously. She visits her constituency regularly and takes special interest in the welfare of abandoned widows living there in poverty. Some other actors who have been elected or nominated to Parliament could learn a thing or two from her.

However, I wish the author had cleared up, once and for all, an aspect of Hema Malini’s life that continues to puzzle many people — her relationship with Dharmendra. The two met and fell in love during the making of Sholay, much to the distress of her orthodox Iyengar parents, more so since the man was already married with children. The mother tried to convince her to marry actor Jeetendra who had flown in to Madras for that purpose. But an inebriated Dharmendra turned up at the doorstep at the last moment and put a stop to it. Of such stuff are bad Hindi films made!

Hema and Dharmendra were finally supposed to have married on May 2, 1980. I wish the author had enlightened us on how this was possible. Dharmendra was already married to Prakash Kaur, as he still is, and our laws do not allow Hindus to have more than one wife. When Dharmendra stood for elections as a BJP candidate in 2004, he mentioned only the property of this wife in his declaration of assets.

We are told here Dharmendra spends the day with Hema Malini and their two daughters but in the evening invariably goes back to Prakash Kaur who lives just minutes away. There were reports the two had converted to Islam and had changed their names to Dilawar and Ayesha Bi and a nikaah was performed in 1979. However, Dharmendra denied this and who can blame him since both were elected to Parliament! So are Hema Malini and Dharmendra legally married or not? You tell me! The author doesn’t. A disappointing book on a number of counts.

Bhaichand Patel is barrister-at-law of Inner Temple, London. From 1966 to 1971 he was a junior of Rajni Patel. He also wrote a regular column in Blitz in its heyday.