Throwing light on a dark era

At an interaction, in connection with launch of his new book, Shashi Tharoor clears misconceptions about ‘contributions’ by the British. 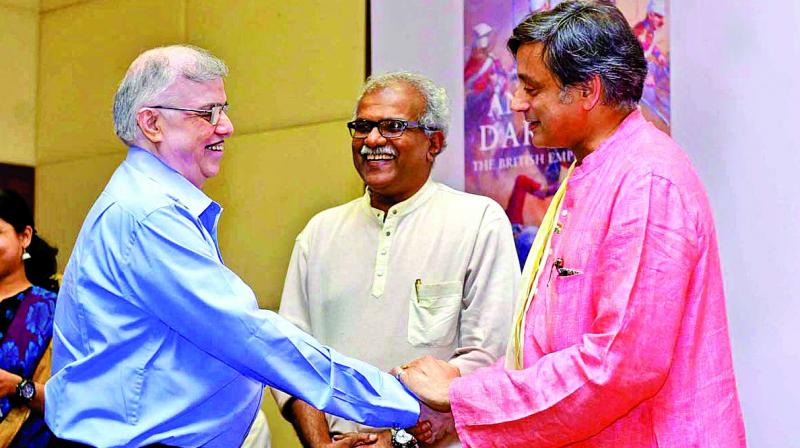 Shashi Tharoor greets Governor P. Sathasivam at the launch of his latest work An Era of Darkness: The British Empire in India . Journalist M.G. Radhakrishnan is seen next.

he eloquence is expected. The magic he has with words is there to be seen, heard, and read. Copies of Dr Shashi Tharoor’s newest book — An Era of Darkness: The British Empire in India — are outside a hall at Hilton Garden Inn, Thiruvananthapuram. And inside is the author, answering questions on the subject he chose to write about.

It’s familiar. A 15-minute version of it spoken by him for a debate at the Oxford Union Society had gone viral, surprising the man himself. He had expected people to know all that he said. But the publishers – Aleph Book Company – told him that if they had, his speech would not have gone so viral. So then, Shashi agreed to write this book.

“Today’s young people should not enter the 21st century still thinking that monster and racist scoundrel Winston Churchill was some sort of a hero as the British tried to portray, and they should know that 35 million Indians died as a result of deliberate British policy,” says Shashi Tharoor, also a Congress MP, at the launch of his book in Thiruvananthapuram. He vehemently argues in the book and outside of it against all claims praising the British of the good they have done in India – the railways and the English language, and tea and cricket. He talks of how the 200 years of British rule had made one of the richest countries in the world so poor. “We had 23 percent of the global GDP and poverty was unknown. People controlled their own land they tilled. India was a world leader in at least three industries – steel, textile and ship building. But by the time the British left, we were reduced to one of the poorest countries in the world.”

Shashi repeats that all these had been said before by leaders, and therefore in this particular area, there is no ideological difference between left, right and centre. “Where it gets controversial is I speak of 200 years of British rule, while the ruling party and its followers would speak of 1,200 years of foreign rule, from the time of the very first Muslim invaders. There are fundamental differences between those who came from abroad and stayed, married here. There is no foreign blood left in them after generations. They spent their loot in India. To my mind, they became Indian. But the British never became Indian. They took from India and sent it back to England. The amount of money drained in the 19th century was estimated at over four billion pounds in those days.”

As he said at the Oxford, he believes the British could atone in two ways – one, to apologise at the Jallianwala Bagh where hundreds of innocent people were massacred, like German chancellor Willy Brandt did to Warsaw for World War II and Canadian president Justin Trudeau did to Indians for Komagata Maru. Second way to atone was by teaching colonial history to their own children, he says.

He talks of Indians who have made achievements on par or on a higher level than people in the West and he cites examples of Kalidasa in comparison to Shakespeare and Aryabhatta against the likes of Galileo. But, Tharoor also talks of the danger of alluding to unverifiable claims such as those made by the Prime Minister about Lord Ganesh having had a plastic surgery in those early times, and an RSS leader mentioning the existence of pushpaka vimanam to the Indian Science Congress. “Such claims undermine the credibility of the truth.”

Journalist M.G. Radhakrishnan who chaired the discussion, points out the lack of mention of the caste system in Tharoor’s book, with a theory that the British is credited with the removal of untouchability. But Tharoor argues against it saying that it was in effect the work of leaders such as Ayyankali and Sree Narayana Guru that helped remove such evils.

He is also in favour of globalisation, but there is a general backlash against it these days. “We probably took to globalisation too late and then enthusiastically embraced it too long.” He quotes Gandhiji: “I do not want my house to be walled in on all sides and my windows to be stuffed. I want the culture of all lands to be blown about my house as freely as possible. But I refuse to be blown off my feet by any.”

Gandhiji’s quotes are in fact best suited for the Twitter age – short and under 140 characters, Tharoor laughs. As much as he admires the man who brought a new tactic to fight for freedom, Shashi Tharoor believes that it would have worked only against an opponent like the British, that it would not have worked today against the likes of Lakshar-e-Taiba or Jamaat-ud-Dawa.

Interview | ‘I write every weekday unless I am teaching’: Chitra Banerjee Divakaruni