Of missing wife and a newfound second love

The Unseeing Idol of Light is a nice story that could have been better with a ruthless editor. 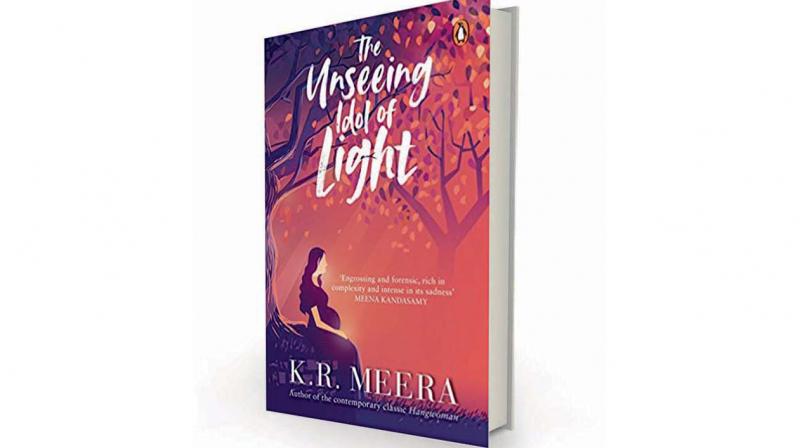 Love can make you blind — literally. When Prakash’s pregnant wife Deepti mysteriously vanishes from the lower berth of a train, he loses his eyesight, or rather, “The pupils of his eyes had wandered within the darkness of his eyelids, searching interminably for Deepti.” He looks for her in mortuaries, homeless shelters, anywhere and everywhere he can think of. His childhood friend Shyam is as obsessed about finding Deepti as Prakash is — in fact, he even gives up the idea of marriage so he can be Prakash’s eyes.

Ten years later, Deepti is found (or is she her lookalike) in a homeless shelter: a woman who is mentally challenged and cannot speak coherently or recall anything about herself. Deepti’s father is fairly certain she is his daughter, but Prakash is equally certain she is not. This leads to some arguments, of course.

“When are you going to bring her home?” Amma enquired.

“That is not Deepti,” Prakash answered.

Prakash refuses to have anything to do with this woman and wants to marry Rajani, a former colleague at the library where he works, which infuriates Shyam further. “You are totally crazy!” he gasped. “Or else you are really rotten! Just when you have found the woman you have been seeking relentlessly for the past ten years — one whom all of us have been looking for — is the exact time you decide that you would like to marry another woman?”

Rajani loves Prakash with every fibre of her being. “Their passionate affair had continued for almost a year after Rajani’s hospitalisation. Prakash indulged in physical intimacy with her on every possible occasion; and she willingly surrendered to him. But whenever Rajani dared to step across his inner barriers, he brutally crushed her underfoot. Prakash stoked the flames of jealousy’s kerosene lamp within her, covering her with soot. In between his kisses, he would mock her by repeating the half-phrase: ‘I love…’ and when she objected pitifully—‘I know, it is Deepti whom you love, Prakashetta’—he would laugh out triumphantly.” Yet, she refuses to marry him, in case the woman is Deepti.

You may wonder just why Rajani is so devoted to Prakash. It’s not easy to like him, even keeping in mind that he’s had a traumatic childhood with one visual that’s scarred his mind: that of his father hanging from a mango tree in his judge’s robes, looking rather like a bat. He’s inscrutable, his philosophical ramblings are often annoying, his nonchalance about most things (apart from Deepti) seems out of place and the entitled way in which he helps himself to Rajani whenever he gets the urge without giving anything of himself in return is downright selfish — particularly when you discover that Rajani’s childhood wounds are far deeper than his, and they’re still bleeding.

Prakash may mean light, but it’s Shyam who actually brings occasional flashes of light in this book. He is perhaps the only non-dysfunctional character, a best friend whose loyalty makes him voluntarily jump through hoops, even though he sometimes wishes he didn’t have to. You can’t blame him for hoping Prakash would regain his eyesight when/if Deepti returned, so that “his own eyes would be freed from the responsibility of seeing the world on his friend’s behalf.” It is Shyam who provides the dark humour in the book too — here’s a superb example:  “A month after Deepti went missing, Shyam had visited the mortuary at the Calicut medical College to identify a body suspected to be hers. The dead body, yet to be sent for post-mortem, was covered with a soiled green sheet, and as he pulled the sheet away, Shyam’s eyes fell on the stark naked dead body beneath. Before he could recover from that shock, he was asked to identify the clothes of the unknown woman, kept inside a packet in the nearby police station. The first item to tumble out from the packet was some grubby underwear. Shyam felt like throwing up. On the way back, Shyam had purchased thirty new pairs of underwear.” His conversation with the shopkeeper he buys his monthly stash of underwear from is vastly amusing, and fortunately when Shyam is in the picture, your lips are bound to twitch — he’s likeable, dependable (well, mostly) and reassuringly real. The song, ‘For he’s a jolly good fellow’ could well have been written for him.

Things get even more complicated when Deepti’s father takes the woman from the shelter to his home. Shyam suddenly vanishes. And when he reappears, Rajani vanishes, and then the search for Rajani begins. We’re back to square one, but fortunately, there is a conclusion.

The Unseeing Idol of Light is a nice story that could have been better with a ruthless editor. Dark though it may be, it is not depressing. The imagery is strikingly beautiful and is packed with many riveting little mysteries (including Deepti’s disappearance) that keep you turning the pages. While some situations, admittedly, are wildly over the top, and some characters are extraneous, they don’t interfere with the main plot. Prakash says, “Sight is nothing but half light and imagination…You see what you wish to see. And you avoid what you don’t want to confront.” Do keep this insight in mind when you read the book.

Rupa Gulab is a freelance writer and the author of Girl Alone, Chip of the Old Blockhead and The Great Depressant of the 40s