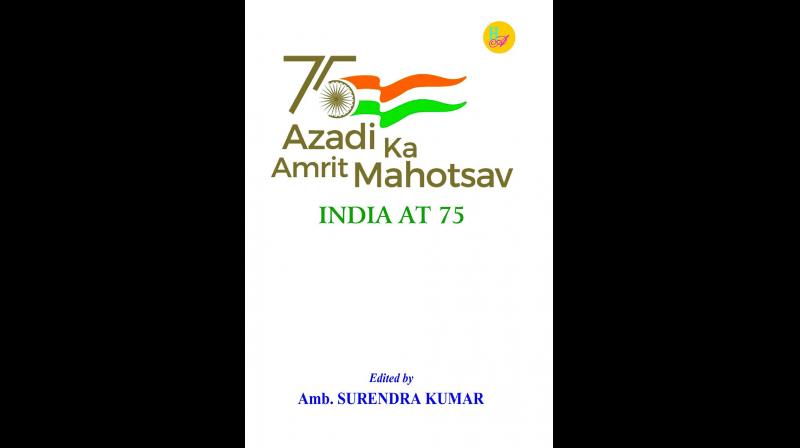 This book rings together an unusual collection of politicians, diplomats, journalists, artistes, economists and officials to commemorate India’s 75th birthday. The essays they have written may be in a celebratory mode, but they also provide critical insights and useful recommendations on ways of dealing with challenges that the country remains to overcome. Remarkably, the slim (235 pages) book covers a range of themes from economy, business, politics, history, administration, defence, policing, climate change, classical dance and cinema. It seeks to provide a balance portrait with views provided by writers affiliated the RSS as well as Congress.

Most of the writers are very well known in their respective fields. But it is impossible to refer to the essays of all the writers given the paucity of space in this review. As it is, it is not easy to review an edited book which provides a variety of points of view. So we will only focus on some of the notable chapters.

In his lead essay, economist Lord Meghnad Desai notes that India’s biggest weakness is its “in-born inequality of status, ability, character [which] are deeply ingrained in the culture”. It is still defined by the jati system and it remains medieval in its social structure. The low status assigned to its commercial classes, the Vaishya, steeps into its government policy and unless India can celebrate the primacy of private business, it may be doomed to repeat the failures of its last 75 years.

The essay is in contrast with that of Surjit Bhalla whose pro-government position is well known. He sees India@75 as a time for celebration and hope. He says India has had an exceptional record of poverty alleviation and is well on its way to achieve a GDP of $5 trillion within a couple of years, notwithstanding the Covid pandemic and the Russia-Ukraine war. There are, of course, others who say that the economic achievement is only on the surface. There are troubling statistics on the front of employment where the number of those seeking jobs is actually showing a decline suggesting a kind of existential despair.

Another realistic picture is painted by former Army chief Deepak Kapoor who says that due to insufficient funding the modernisation of our armed forces has suffered. Despite the challenges faced by adversaries like China and Pakistan, the defence budget as a per centage of GDP is steadily going down in the past decade. It is currently 1.47 per cent, but needs to be gradually increased to three per cent if a viable level of defence preparedness is to be created.

India’s achievement in the last 75 years is creditable. One important aspect of it is that whatever has been achieved has been done so with the least bit of destruction and bloodshed. Contrast this with China where tens of millions have died, some in famines and others executed because of the politics of the Communist Party of China. There is little doubt that we could have achieved much more.

As for now, looking at the future is a bit worrisome. Hind sight, as they say, is 20/20 but the twists and turns that lead to the future are difficult to forecast. However, one issue stands out — the divisive politics that are seeking to marginalise Indian Muslims. By 2050 according to one estimate there will be 1.3 billion Hindus in the country and some 350 million Muslims. India will be the most populated Muslim nation in the world. Yet the politics of the current ruling party seeks to marginalise them and create a class of second class citizens out of them. No country that willfully consigns a vast chunk of its populace to second class status is likely to make much progress. By now we should know that in a nation as vast and diverse as India, all the boats in the harbour must rise together.

The editor, ambassador Surendra Kumar, has aptly summed up both the achievements and the challenges that remain in the last chapter. There is, perhaps, little reason to repeat the achievements. Most of us are familiar with them. It is better to heed the challenges, which Kumar says, include: 1) the continuance of untouchability and discrimination of Dalits, 2) bonded labour which carries on despite claims that it has been abolished, 3) Discrimination against women, in particular as female foeticide which continues unabated, 4) The retrograde diktats of khap panchayats, honour killings and dowry deaths, and 5) the issue of discrimination against Muslims.