How the British took control of Punjab

The colour and detail has been carefully gathered by the author. 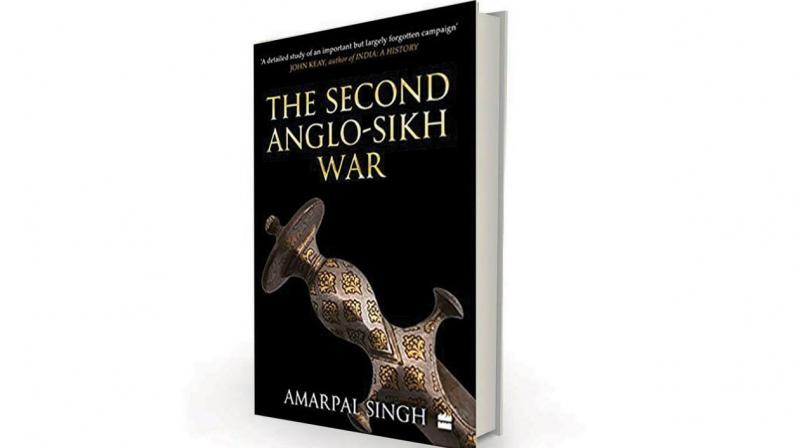 The book, The Second Anglo-Sikh War, by Amarpal Singh is a fascinating account of attempted indirect British control of Punjab after defeating the Sikh Army in the First War in 1846. The vanquished Sikh Army had been enfeebled by a decade of in-fighting.

Sikh kingdom’s founder Maharaja Ranjit Singh had died in 1839 leaving some fractious descendants, none as capable as him. When shown India’s map, mostly red indicating British control, he is reported to have predicted that it shall all be red one day. But due to the high level of his Army’s training and morale, it took the British a decade of intrigue and pressure to wear down their last worthwhile opponent.

By the 1846 Treaty of Lahore, immediately followed by the Treaty of Amritsar which transferred control of Kashmir to Maharaja Ranjit Singh’s Dogra General Gulab Singh as recompense for betraying the kingdom during and after the war, the British imposed indirect control by positioning British troops in Lahore and British advisers to run the state, albeit for a short period. Shrewdly they felt it was better to have a Sikh-led buffer between British-occupied India and an always restive Muslim majority trans-Indus area abutting and including Afghanistan.

All other heirs to Ranjit Singh’s throne having perished, most under suspicious circumstance, only the child prince Duleep Singh remained. His mother Maharani Jinda and the Vizier Lal Singh, fearing the Sikh Army, happily sought British Army’s protection and Sikh Army’s downsizing. But they also resented British interference in their affairs. The book, in an eminently readable style, describes how personalities shaped events that then spun out of control of both the British and the Lahore court.

The twin shifting of Henry Lawrence as adviser in Lahore, who had won the confidence of the power brokers at the court, and Governor General Sir Henry Hardinge in Calcutta by end of 1848 snapped two vital links that understood Sikh psyche and the fears and greed of courtiers. Henry’s brother John was impersonal and the new Governor General Earl of Dalhousie, all of 35, brought a more aggressive style and the Doctrine of Lapse, whereby any Indian state could be annexed if the ruler was “manifestly incompetent or died without a direct heir”.

The trigger for the Second War with the Sikhs was the insensitive behaviour of British representatives in Multan and Hazara. In the former case two Britishers got killed and in the latter Capt. James Abbot first offended venerable Sikh governor Chuttar Singh of Attari by ignoring him completely while overseeing administration and then to contain him, once rebellion began in Multan, incited Muslim tribes to attack the Sikh soldiers. British representative at Lahore forbade him from such tactics, but communications then being slow the fuse was lit by the time instructions arrived.

The book recounts the military formations and the actual battles with precision. It would leave any reader with wet eyes when the missed opportunities are clear with historical hindsight. The delay by Chuttar Singh’s son Shere Singh to march, when merely 100 kilometres away, and capture Lahore, which was lightly held, the bulk of British forces being busy with the siege of Multan.

Even more significantly, the Battle of Chilianwalla in January 1849 on the banks of Jhelum and almost where Alexander fought Porus when after Day 1 of skirmish the British were beaten back with such force that they lay completely exposed for 24 hours. Shere Singh did not realise that victory beckoned and held back, much like Hitler’s German troops did at Dunkirk. The colour and detail has been carefully gathered by the author.

The irony of Capt. Amarinder Singh, erstwhile Maharaja of Patiala writing a foreword in his capacity as a military historian, is palpable. The state of Patiala sat on the side-lines, as their British allies and protectors defeated and enslaved the great Sikh kingdom. In fact, Lord Dalhousie received the then ruler of Patiala at Panjore gardens, near today’s Chandigarh, seated on the seized golden throne of Maharja Ranjit Singh, which is now in the Victoria and Albert Museum, London. Even more ironically, Capt. Singh’s maternal grandson has married a princess of the erstwhile ruling family of Kashmir, whose founder betrayed the Sikhs on battlefield and during negotiations of the Treaty of Lahore, having already been promised Kashmir.

The book is a must read to realise how great was the achievement of Maharaja Ranjit Singh, the first indigenous ruler of Punjab in a thousand years, in welding a multi-religious state into a power that the British feared and could only enslave at great cost.

The so-called Durand Line between Pakistan and Afghanistan is merely a replication of the fortress based boundary that Ranjit Singh devised. The Afghan question dogged the Sikh kingdom as it did the British later — and Pakistan now wrestles with that difficult legacy. But there is one constant. When the Afghan ruler, seeing an opportunity, offered token military help to Raja Shere Singh before Battle of Chilianwalla, in exchange for Sikhs ceding Peshawar, the British interlocutor warned the Raja that when battle starts the Afghans will bolt and affect the morale of other troops. That is precisely what happened. It is a lesson the US forces have learnt the hard way in Afghanistan since 2001. As George Santayana said, those that ignore history are destined to relive it.

The writer is a former secretary in the external affairs ministry. He tweets at @ambkcsingh