Talking about poetry is like taking a hot bath in a tub with your clothes on, says poet-writer Jeet Thayil. 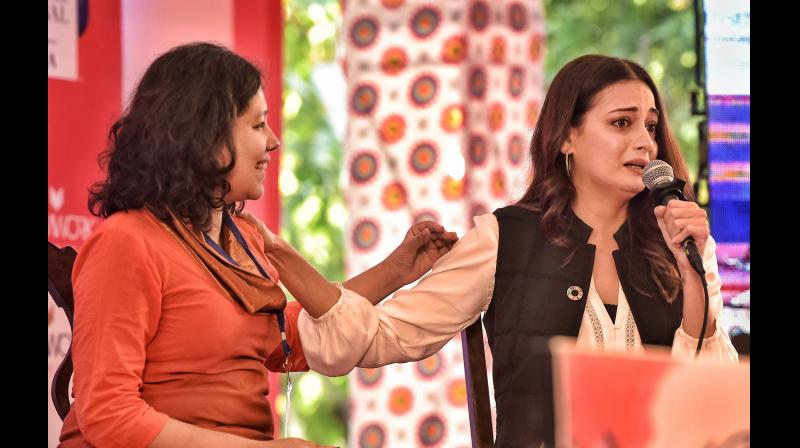 How do time and the sense of place affect a poet? At poetry durbar on day three, this was the question posed by Lakshya Datta to a dazzling panel of wordsmiths.

Anamika, who can be both glorious and exact in Hindi, used a metaphor to describe what she saw as a relationship between the poem, the place where it comes from, the place where it is penned and the time of penning those lines. If the poem could be compared to a spectrum, then the place is the prism which gives birth to it and time is the ray of light, she said, being the classicist that she often is.

I have written all my poems in Allahabad but then they changed the name of the city to Prayagraj and since then I have stopped writing, was the irascible senior poet, Arvind Krishna Mehrotra’s curt retort.

Wry and brazen, Jeet Thayil sat back and responded: Talking about poetry is like taking a hot bath in a tub with your clothes on.

His one-liner would remind one of Lemn Sissay’s short argument for performance poetry to be delivered on day four. Sarcasm, they said, is the lowest form of wit, he recited. I said, it is not, is it? What followed was a pause that sealed the victory of his argument.

What’s in a name of a place or a city? Well, perhaps Calcutta can evoke both hope and nostalgia in a way that Kolkata doesn’t. Calcutta, now Kolkata, was the subject of discussion at a session on the final day of the fest when the audience learnt that it was a city that also gave Devapriya Roy the love of her life. Roy confesses that she is a poor navigator and would habitually get lost in the lanes and bylanes around College Street. In her first week in college, she launched a newspaper. It was, she says, the most productive month of her whole life. She also liked this boy who was a year senior. “The day the newspapers were printed we gave them to a little typesetter and desktop publisher’s shop somewhere off College Square. I needed somebody to carry the newspapers back with me. So I told him, will you walk with me to the shop? He agreed. And then we walked round and round to find that shop. We ended up spending three hours walking around that neighbourhood — no sign of the shop — I didn’t know where it was , but at the end of it all, I had found love which I think is a better bargain. Very cleverly, I later told him sorry and I married him,” Roy reminisced. That gentleman’s name is Saurav Jha, also a writer of renown.

If the city can be the seat of so many memories and dreams and the source of so much passion and ferment, how about the village? After all, the heart of India lives there and yet in the midst of climate change and a raging agrarian crisis, what are sons of soil, indeed, the children of the land, doing to address it? What of their disappearing stories, unique games and crafts and colourful traditions? Are they missing from the conversation? More importantly, is the conversation authentic without them? Can we envision a new Left that has addressed questions of identity?

Anthropologist and Hindi writer G.C. Bagri who knows 12 languages and is from Alwar in Rajasthan, has based his novel, Aakhree Gaon(translated The Last Village, published by Vani Prakashani), on his native Raisarana which is located on the state’s border with Haryana. It is his attempt to bridge this gap and his act of love, he says. We wish for more Bagris to populate our nation and spread this love.

And so, from places to platforms for thought pioneers and ideas that both potentially and actually change the world.

On the very first day of the festival, an audience member got up to ask Anand Neelakantan this question. Is Netflix a better medium of creative expression than mainstream publishing? Many critical observations and ideas are considered no-go areas by the media and publishing industry, but one can work with them on the audio-visual medium and broadcast them on Netflix, going by the kind of films that are shown on that platform and the topics they choose to examine.

Neelakantan was at a loss but put up a brave front. Netflix is a private medium to the extent that you watch a Netflix movie on the mobile, he said, adding: Similarly, reading a book, too, is a private act. It has been so since time immemorial. Indian culture is liberal as far as freethinking is concerned, and these taboos are only a manifestation of Victorian-era morality. It will take a lot of time to change that.

Sometimes, the subtext of a conversation is all that you need to truly understand its meaning. In terms of the sheer number of conversations, both express and inferred, this was a thumpingly successful fest.