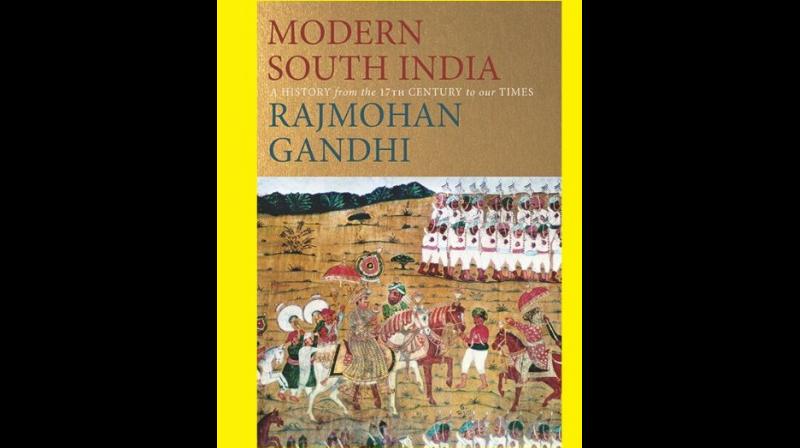 Modern South India — A History from the 17th Century to Our Times By RAJMOHAN GANDHI (Photo: Twitter @AlephBookCo)

A lesser-known fact may be that the Venetian merchant-explorer Marco Polo came to Pulicat Lake where he berthed his boat in 1292 and travelled towards what would have been ancient Madras. Of course, the history of visitors to South India goes way back to Greek and Roman traders. The history of far-flung parts of the world trading with South India goes back centuries, beyond Vasco Da Gama who was one of the most famous traders to come south.  A historic visitor in the first century CE was the doubting apostle Saint Thomas, who is celebrated in Chennai with the famous St Thomas Mount named after him and long before that had the Portuguese naming the village of San Thome after him. In the first century CE, he was interred in the basilica in Santhome

It is a matter of curiosity that South Indian history must somehow seem so laid back like its people that it rarely speaks reverently of such old ties as those brought by the likes of Marco Polo. You may not find a plaque or a memorial honouring Marco Polo around Pulicat Lake. Also, given the nature of our school history books, it might appear that the history of India is that of the Mughals and then that of the occupiers who first came here as traders and then became rulers after the Indian Mutiny — the British and their Raj.

It was most fascinating to pore over the book by Rajmohan Gandhi on modern South India which is a history from the 17th century right up to the modern times. This book helps remove the lacuna created by a blind belief in the seat of the Mughal empire and then the capital of the British after they moved to imperial Delhi from trading Calcutta being thought of exclusively as the centre of India and the cradle of its modern history. It might have taken me a while to read this detailed history put down in this great Dravidian story by a scholar and descendant of Mahatma Gandhi. The pandemic helped in creating the time to read such a valuable and well-researched tome.

The author defines the South India story attempted in the book as one of a peninsular region influenced by the oceans, and not by the Himalayas. We must first doff our hats to the scholar who had the vision to see the south, the land of the Dravidians and home of four prominent cultures — Kannada, Malayalam, Tamil and Telugu — and their myriad subcultures as an entity that stood out on its own and not just an appendage, as a very political India ruled by North Indians thinks of the South in most modern times. In restricting himself to far more modern centuries, Rajmohan cannot dwell on the brilliance of Chola or Pallava architecture or that of the Hoysalas.

He does concede that his book does not seek to unearth hidden knowledge about the past. Selection being a bigger challenge than exclusion, the author brings out people and events from at least four centuries that would help us define South India even better. It enhances our understanding of a diverse land that was attractive enough for northerners to come to conquer far more often than any south Indian ruler looked north to expand his kingdom.

Perhaps, that itself is a definition of South India and its sensibilities through the ages. Raja Raja Cholan may have been an exception in an expansionist view of his grand empire that encompassed vast areas across the eastern seas.

The author’s four important dates for perspective are well worth remembering — 1498 and the arrival of Vasco da Game in Kerala, 1565 when the Vijayanagara Empire began disintegrating, 1619 and the birth of Fort St George and 1687 when by forcing the independent Sultan of Golconda to surrender, Aurangazeb enforced Mughal authority in the south. Between the first and last dates there are countless personalities of history who are brought to life in colourful manner by a fine storyteller. In describing the fall of the nayakas or viceroys who ruled after the Vijayanagara Empire collapsed, the author has it that the ruler’s eye was “more interested in the courtesan’s smile than the contentment of the peasant’s wife or the pride of the artisan’s mother”.

Today, we speak of political conquerors like MGR who were not from Tamil Nadu and still ruled the land. But there could have been no more colourful conqueror than Chanda Sahib, whose real name was Shams-ud-daula Husain Dost Khan,  and who was born into the Navaiyat branch of South India’s Muslims whose Arab forefathers had landed on the Konkan coast.

Chanda deposed the Rani of Madurai and proclaimed himself heir to the Hindu Nayaka throne. He was removed in a couple of years by the Nizam who came foraging south but climbed back and became the Carnatic Nawab with the help of the French general Dupleix.

Long before he was beheaded by his captor in another of an endless series of succession battles and his head sent to Muhammad Ali Walajah, Chanda was an enigmatic ruler and able military strategist.

There isn’t a page you can turn without learning of old intrigues, battles, conquests and defeats in a land ruled by princes but terrorised by their tax collectors who were ruthless. To evolve into true modernity may have taken centuries, but the book also places in perspective the power of one of Tamil Nadu’s greatest sons — C. Rajagopalachari, whose primary education as a child was in Telugu, and who went on to shine on the national stage. The author brings out the secret of why Rajaji didn’t rise to even greater prominence, which is because Nehru treated him as a go-between to Sardar Patel and after Patel’s untimely death simply ignored Rajaji.

The governor-general of India, chief minister of Tamil Nadu and once de facto head of the Congress and its freedom movement in the south, may have been wrong in trying to thrust Hindi on Tamil Nadu.

But there are few in TN’s history who could have matched his intellectual brilliance and his honesty to human principles as portrayed in his allowing an “Untouchable” of his time to open a tap in the Brahmin quarters in Salem. He had also said, presciently, in 1919 — “Let it be clearly understood that we would oppose such legislation vesting in the government the absolute right to suspect and imprison without trial even if the government is democratic and purely Indian, and not bureaucratic and foreign.” Look around us today and the import of those words will become obvious.

Modern South India — A History from the 17th Century to Our Times
By RAJMOHAN GANDHI, Aleph, Rs 799

Tags: modern south india — a history from the 17th century to our times by rajmohan gandhi, the ocean, not himalayas: presenting the south india story, south indian histroy