An insider’s account of the murder investigation that shook a nation. 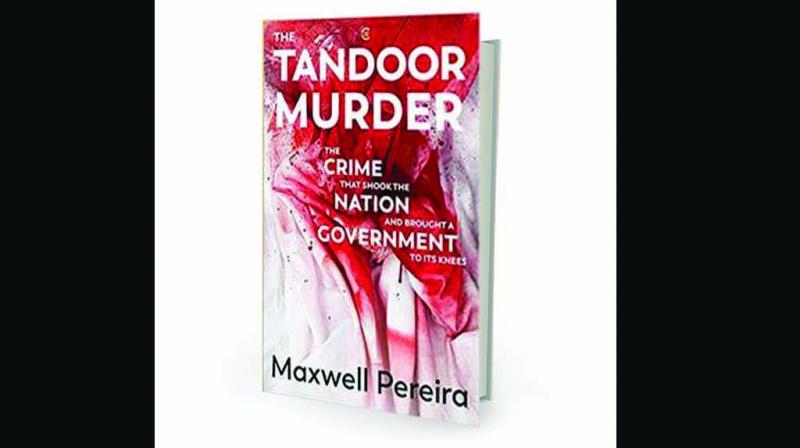 Is that about the Tandoor murder case, someone asks as the parcel is torn open and a new red book slips out. The red is the blood from a piece of white cloth and yes, the title is too obvious — The Tandoor Murder, written by Maxwell Pereira, the police officer who was in charge of the case. It is an insider’s account of the investigation ‘that shook a nation’, a media note said.

“I enjoy writing and reading, and have been a creative writer all my life — at least for the better part of it. My forte being humour and human interest,” Maxwell says. This is true, there is humour from page 1:

“Somebody, somewhere in his misbegotten wisdom decided a cop in India should never be off duty. Must have been a bureaucrat.”

But Maxwell immediately dodges the credit. “Perhaps I can’t take all the credit — those responsible for my upbringing played a big role; and it is possible my editors slashed my text in the right places. I do believe there are innumerable people whose writings are better than mine and I envy them for their gift of expression.”

The Tandoor murder — the killing of Naina Sahni and the burning of her body in a tandoor in a Delhi restaurant — happened on a July night in 1995, when, as Maxwell writes, he was woken from his slumber. Why did he wait so long to write this book? “The book is the result of notes I recorded and wrote over the two years of 1995-1996 at the instance of a major publisher, but ended up holding back for the next 18 years till the final verdict in the Supreme Court — purely in the interest of successful prosecution and especially for fear of the accused possibly using my writings in his defense to his advantage — by introducing elements of doubt or claims of procedural lapses,” he explains.

It was an unusual investigation, he reels from the shock even now at the thought of that tandoor. Sushil Sharma, the accused, then a Youth Congress leader, had evaded arrest for too long. “His change of appearance, the chicanery and machinations, not losing a single opportunity for alibi and creating a defense; the hurdles and difficulties faced by the investigators and police in general; the numerous setbacks for the police in the initial stages; intrigues galore during the 8 and half years for trial,  and another 10 years for appeals in superior courts,” Maxwell could go on and on. He’d tell you with perhaps a pinch of pride that amid all that drama, the police did not stray from the path of correctness in adhering to the procedures and requirements ensuring the highest standards of investigation.