Many views on Future India

Given the challenges, it is only fitting that Indians generate ideas, suggestions and roadmaps to take the country forward. 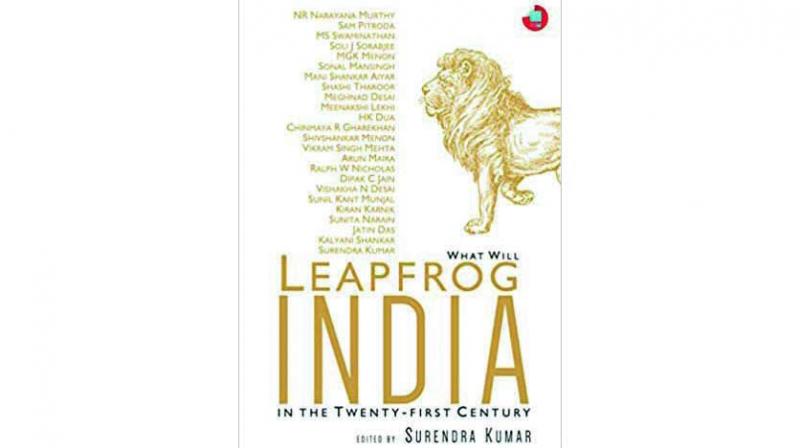 What Will Leapfrog India in the Twenty-First Century By Surendra Kumar Wisdom Tree pp. 227, Rs 379.

Despite all the political rhetoric about the supposed elevated status of India in the global hierarchy and its alleged emergence as a world power, most thinking Indians are only too aware that their country isn’t quite there as yet.

India’s leadership might aspire to a lot of things, which is good, but pretending that these have already been fulfilled is sheer pretence. Much needs to be done to pull millions of Indians out of crushing poverty, harness the so-called demographic dividend, build crucial infrastructure, educate the majority and develop the country’s economic muscle to sustain a prominent global profile.

Given the challenges, it is only fitting that Indians generate ideas, suggestions and roadmaps to take the country forward. Towards this end, former diplomat Surendra Kumar has put together a book that collates the views of a number of prominent citizens on what could be done to lift the country by its bootstraps.

Most of the names are familiar and represent various sectors of the Indian pastiche. Not surprisingly, their views make for interesting reading, even if they do not contain any great surprises.

Shashi Tharoor’s essay is perhaps among the better ones, focusing as it does on the huge population of under-35s who make up the bulk of India’s population: “The nation’s average age is 28; indeed, 66 per cent of the population is under 35, which means the young are already a majority in India. But they are not the ruling majority.”

“They are a generation born in the era of liberalisation”, writes Tharoor, “growing up with greater freedoms, more choices and opportunities than their forebears, impatient with the heavy hand of government and tired of shopworn rhetoric about socialism and upliftment of the masses. They want action, not slogans; results, not bromides.”

Tharoor argues that the educating, harnessing and mainstreaming of this huge young population constitutes India’s principal challenge and his essay offers a few suggestions that are not without merit.

In another thoughtful piece by former editor and Rajya Sabha member H.K. Dua, the alarming decline of standards in all three pillars — legislative, judicial and executive — of the Indian republic is highlighted.

“One of the worst examples of institutional decline is Parliament itself”, he points out. “The Constitution entrusted great responsibility and authority on Parliament, it was looked at with awe and a great deal of respect by the people. Today, it has become a subject of public ridicule.

The conduct of many Members of Parliament, with exceptions, has become an object of public scorn.”

Equally critical of the judiciary, Dua pointed out: “Of serious concern is the huge pile of arrears of cases pending in courts across the country... But for the occasional statement of concern, little effort has been made to reduce the arrears. Three crores of arrears in human terms means delay, which translated into actualities means denial of justice to three crore families. Even otherwise, the judiciary, particularly in the states, has lost the faith of the people — sometimes because of the quality of justice it is dispensing and sometimes because of other reasons.”

Some themes are common and reflect a shared anxiety. These mainly have to do with education, poverty and corruption. The concern over widespread corruption in the Indian system, diplomat Surendra Kumar points out, is a reflection of the decline of morals. “Whether it is rampant corruption or lack of good governance (it is perceived to be the governance of the rich and powerful, for the rich and powerful and by the rich and powerful) or a steep rise in crime and cruelty against women and the weak, the underlying factor is the deep erosion of moral and ethical values.”

The problems and some of the measures required to achieve the objective of national resurgence are well known. What is not addressed is who will implement the agenda necessary for change. How could the ruling class be compelled to alter course, abjure criminality within its ranks, cleanse itself and end the abuse of power? This is the core issue that remains unanswered.