This is a book about how relationships are formed, what it takes to sustain them, and how to keep them going even when the future is uncertain. 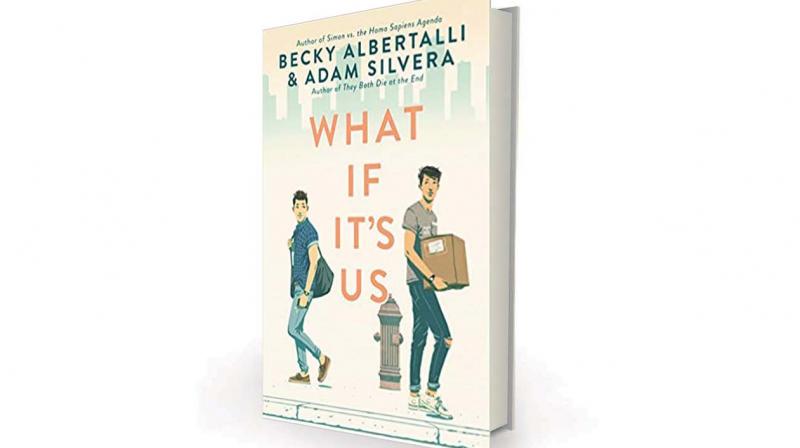 What If It’s Us by Becky Albertalli, Adam Silvera, HarperTeen, Rs 1,445

Here’s what a good book can do to your mood: I am surrounded by newspapers bearing the most depressing of headlines, and if I were to alt-tab my windows, I’d have even more terrible headlines to gaze at via social media and news sites; all, in other words, is doom and gloom, and the world appears to being going to hell in a hand basket. And yet. As I sit in front of my computer, working on this book review, I’m smiling. Not just smiling. What’s on my face is a very goofy grin — if you saw me, you might think I’m in love. And you’d be right. I am in love — with a young adult (YA) book called What If It’s Us, a collaboration by American authors Becky Albertalli and Adam Silvera, about two boys and how they fall in love.

For the last four months, ever since I heard of it, I’d been counting down to this book’s release date, October 9, 2018. That’s because Albertalli and Silvera are two of my favourite YA authors. Albertalli’s Simon Vs. The Homo Sapiens Agenda (now a movie called Love Simon) is so full of life and love and exuberance that it knocked my perpetual cynicism right out of me while I read it. And while Silvera’s History Is All You Left Me is not as snappy and happy as Simon, it is still one of the most hopeful books I’ve ever read – and in the climate of gloom that has settled on the world these days, hope is what I look for.

What If It’s Us is about 17-year-old Arthur, in New York for the summer, interning at his mother’s law firm, and 17-year-old Ben, an NYC native forced to attend summer school to make up for poor grades the previous school year. Well-off Arthur is from Georgia and this is his first visit to NYC. He loves Broadway musicals, is especially a Hamilfan (fan of the musical Hamilton), and expects that his life will literally be a song. He knows he is totally minus any chill whatsoever, but doesn’t particularly care till he meets Ben. And then Arthur wonders if maybe he’s too much.

Ben, when we meet him, has just broken up with his boyfriend, and that, along with the fact that he has to pass summer school or fail his junior year at high school, means he is far quieter than Arthur. He’s burdened in many ways — his family is far from well-off, though they’re doing all right, he’s Puerto Rican but feels guilty for passing as white and even guiltier for not knowing Spanish, not only does he have to attend summer school, but so does his very recent ex-boyfriend Hudson, which is awkward. And basically, all his life, Ben has felt that he’s never been enough.

When Arthur and Ben meet, it’s just like the script of a musical. Arthur has been sent out to pick up coffee for his workmates and when he spots Ben, who is carrying a big box, it’s love at first sight. He immediately changes track from coffee shop to post office, which is where Ben is headed.

The two boys have a brief conversation, but no names or phone numbers have been exchanged by the time Arthur is distracted by something else, and Ben vanishes. Neither wants to let this go, however. Both felt a strong attraction during their conversation, and each boy goes out of his way to find the other; Arthur is finally successful. And then their relationship begins, filled with highs, lows, what-ifs and how-cans, insecurities and jealousies, four first dates (because the first first date and the second first date and the third first date were filled with the wrongness that comes only from not knowing the other person yet), and misunderstandings. And then finally there’s clear communication and Arthur and Ben become the one-word ArthurandBen and then the date of Arthur’s departure for his home in Georgia begins to loom. Ominously.

Unlike most young adult novels I have read lately, What If It’s Us is simply a love story, unburdened by issues of abuse, poverty, racism, sexism, body image, sexuality and all the other matters that tend to form the basis of YA books these days. This is a book about how relationships are formed, what it takes to sustain them, and how to keep them going even when the future is uncertain. While the bulk of the book is about Arthur and Ben, their friends play a big part in the novel as well, so we see what happens when two best friends each finds a significant other and then have little time for each other; how to cope when, out of three close friends, two fall in love with each other, so the third is left out, and what to do when a tightly knit group of four friends first pair off into twos and then split up, leaving each one in the group bereft of the people necessary to her or his life.

Relationships of all kinds can get complicated, and the solutions suggested by What If It’s Us seem a bit simplistic, but at the end this book shows that if you want something enough, you’ll be mature enough to do what it takes to get it and keep it. Which is a lesson many of us need to learn.