Book Review | Why the ‘hardest’ journalism is exactly what matters most

Rather than fix our data collection problems, the pandemic only made them worse 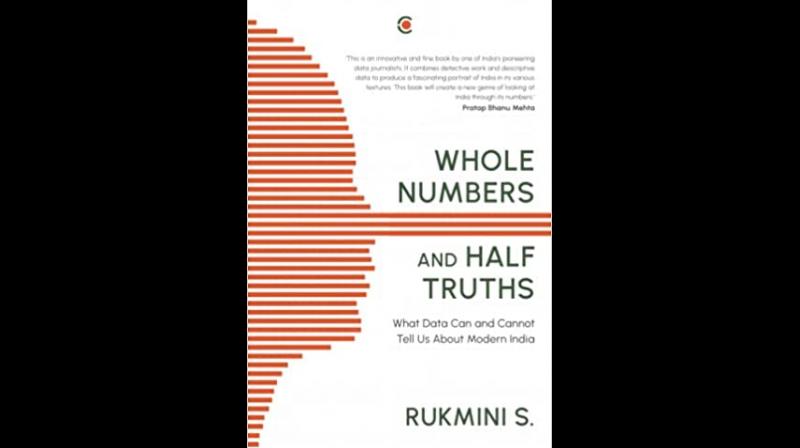 Cover image of the book 'Whole Numbers and Half Truths: What Data Can and Cannot Tell Us about Modern India' by Rukmini S. (Twitter)

If there’s ever a way to puncture a know-it-all journalist’s massive ego, it’s with this book.

But as this book also explains, data journalism is not as easy as it seems either. It cannot work effectively by itself. For instance, as the first chapter reveals, the annual National Crime Records Bureau report does not include every FIR recorded but only the “most heinous” crimes. This report is used by every media house to check on crime stats in India, by region and type of crime. It is only a little further digging by the author, journalist Rukmini S., which brought this fact to light. Further, the NCRB can only record crimes according to current laws in the Indian Penal Code: this makes hate-related crimes difficult to include in the report.

As Rukmini points out, “hard advocacy and political work to create the legal framework for that data needs to happen first”.

The basic hypothesis of Whole Numbers and Half Truths can be pinned here: that numbers need to be understood and they also need to be corroborated. Rukmini is scathing of fellow journalists as well as psephologists, pollsters and TV “experts” who use old cliched “beliefs” to interpret election data for instance.

She explains how conclusions about “vote-banks”, used liberally to categorise election results, match neither the figures nor empirical and anecdotal evidence. They just perpetuate old myths by papering over ground realities.

As she writes, “Finally, we might not be able to get analysts, whose job it is to spin quick and pithy narratives on-air, to be more circumspect, but there’s no reason to allow these narratives to dominate our understanding of how India really votes”, we see why we’re so misled by ourselves. The media has a large part to play in using data to overcome our many shortcomings while presenting the many stories of India to ourselves and the world.

From how India votes to how India loves, marries and eats to how India spends money and grows old, we find the data to give us the bare facts. And then, how to interpret those facts to understand our situation better.

One of the most significant sections within the book comes in the chapter on health. India did not collect sufficient data during the pandemic and in many instances went out of its way to deliberately suppress data to keep Covid-19 figures and the death toll low. India’s persistent insistence that our mortality rate has been amongst the lowest in the world, and that India and Modi handled Covid-19 better than anyone else, did not stand against any data at all except that which was doctored.

Rather than fix our data collection problems, the pandemic only made them worse. The book was written before the latest WHO data revealed that India had one of the highest mortality rates and hid millions of deaths. But this is foreseen within this book. The fact that we had any data to combat the government’s attempts of obfuscation comes from private initiatives, fascinatingly described in the book.

Indeed, the author feels that unless we fix our institutional failings when it comes to matters of health, hospitalisation and illness, the data collection on this front will only get worse.

She ends with hope, that the conversation that has broken down between the Right and the Left in India can be restarted by data.

Whole Numbers… is not a mathematical exercise full of hard facts and statistics. It is a nuanced and complete look at how you can use available data — from reliable sources which includes government and private efforts — to understand what’s happening around you. It explains how instant polls and pat conclusions can be both dangerous and ultimately pointless because they blank out the truth and deal in shadows.

And more importantly, how not having enough data leaves too many questions unaskable and therefore unanswered.

Whole Numbers and Half Truths: What Data Can and Cannot Tell Us about Modern India

Book excerpt: India needs to learn about this intrepid ‘queen’ of N-E