A lesser figure than Chandra Shekhar would have come out of such an arrangement in disgrace. 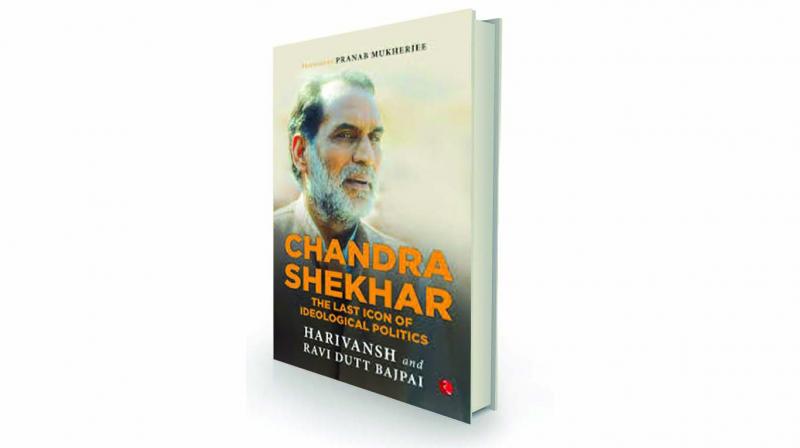 Chandra Shekhar, who was Prime Minister for about seven months (1990-91), is in some ways a uniquely interesting figure of our politics, but there is no biography that captures him dispassionately.

The present volume, authored by the current deputy chairman of the Rajya Sabha, who — as a former journalist and sympathiser — knew Chandra Shekhar well, could have attempted to fill the gap. For the most part, however, the book meanders in the alleyways of hagiography.

The passage of time that covers the politics of deceit involving Devi Lal and others that dumped Chandra Shekhar and brought V.P. Singh to power has been recorded competently, and is probably the best part of the book. But even here the essence of historical time is missed.

The emphasis is on personalities, as is common in journalistic enterprises, but the rendering derives from published accounts, not first-hand observation. The theatre is naturally missing. That day in late 1989, in the Central Hall of Parliament, when Devi Lal backstabbed Chandra Shekhar, encapsulated the drama of that age for observers who were fortunate to have witnessed it.

The question arises: Why did the major players of the day agree to a quiet compact meant to trick Chandra Shekhar and back Singh, the former Congressman whose eye for abject opportunism was clear to all? This was a good question to attempt to answer.

After the RSS-BJP pulled down Singh’s government to further their clever Hindutva politics, Chandra Shekhar, in order to fulfil a long-nursed ambition, agreed to be ensconced in the PM’s chair by Rajiv Gandhi’s Congress. With his long innings in politics, he should have known that the cart cannot lead the horse. Yet, he made his choice with his eyes wide open, although he sought to make this appear as a political necessity.

A lesser figure than Chandra Shekhar would have come out of such an arrangement in disgrace. But here was a no-nonsense, extremely intelligent, sturdy, and articulate personality, who was known not just for his prodigious networking and deal-making capacities but was also justly famous for many of his counter-intuitive public stances that had made him a somewhat iconic figure.

Even so, as PM, Chandra Shekhar in the end merely filled the crevice between two blocks of time, although he gave every impression of doing so manfully. It wasn’t a glorious time for India. The PM had not a moment to breathe.

It seemed the country would default on its sovereign debt, and the nation's gold reserves had to be mortgaged. Chandra Shekhar openly pandered to the Americans by letting their war-planes on bombing missions in the first Iraq war refuel in India, so that Washington may take a soft stance in the IMF on bailing India out.

He also gamely took on the Babri Masjid crisis triggered by the BJP-RSS, and made the appropriate first moves. And, since he was wholly reliant on the  Congress (having way too few MPs of his own in Parliament), he had to do a tricky balancing act.

Eventually, there was a miscalculation on all sides, and the utterly pragmatic leading former socialist (and Congressman) announced his intention to resign on the floor of Parliament, rather than let the Congress pull the rug from under his feet. This backfiring of ambition has been portrayed as a victory here, as is common with Chandra Shekhar’s admirers.

Chandra Shekhar was a non-Marxian socialist. He had an ideology, but no real party to speak of, although he astutely remained the president of the fractious Janata Party for the nearly ten years of its deeply troubled existence until it merged into the Janata Dal. As such, he developed strong survivor's skills.

He would, in reality, have liked to be considered for PM from the Congress ranks after the assassination of Indira Gandhi (whom he admired in many ways, even after he fought her Emergency regime), but he had lost his Lok Sabha election, and Rajiv Gandhi had romped home with 400-plus seats.

Chandra Shekhar was always the clever outsider who, while declaiming about ideology and principle, sought power while holding a weak political hand in terms of parliamentary numbers. Attempting to go into the layers of this dilemma might have made for outstanding reading.

Even setting the sights lower may have been worthwhile if the author had parsed for today’s readers the complexities of Socialist Party politics, and the reasons why Chandra Shekhar rejected the Lohia brand and aligned himself with Acharya Narendra Dev and Jayaprakash Narayan, without subscribing to the latter’s expedient advocacy of RSS in the Emergency period. Harivansh’s portrait falls short of its aim to explore his hero’s ideological moorings and commitments.