Grace is all about celebrating life's victory over battles of heart, says debut author Supreeta Singh

Novel touches upon human psychology, but above all remains testament of affections, affectations and a journey that simply goes on. 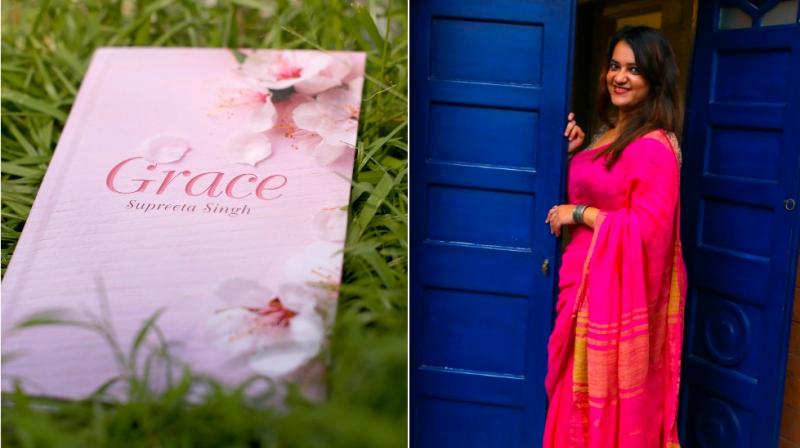 "In the four phases of her life, Kavita had encountered four men who eventually leave a deep impression on her,” Singh narrates.

Real life and love stories may not always go hand-in-hand. But does it mean that we stop trying, craving… looking out for that one special person who might come into our lives like a whirlwind and change it forever?

Debut author Supreeta Singh’s novella Grace is a perhaps a testimony to that search, discovery, failure, acceptance along with a hint of hope.

Starting in the middle, fleeting between the past and the present with a future that has been left open to interpretations, Singh’s Grace touches upon a lot of human psychology, but above all remains as a testament of affections, affectations and a journey that simply…continues.

In conversation with this correspondent, Singh says that being a novelist has always been a dream for her. Speaking about the book, she says, “It’s a love story, and I believe that this is a book which everyone will connect to.”

Kavita the protagonist meets Rana, an acquaintance (?) at a popular locale in Pune, and a story unfolds, flitting between two worlds, the past and the present, as she talks about the men in her life and how they have helped shape her into who she is – however, the yearning for love pervades.

“In the four phases of her life, Kavita had encountered four men who eventually leave a deep impression on her,” Singh narrates, adding, “While she relates the stories to Rana, she unknowingly purges herself out of the emotions she had kept locked within her. She decides to move on.”

Singh says that while writing the book, it naturally meandered into a where no concrete answers or judgement or realisation was necessary.

“The simplicity of letting go became the essence of the book. That’s how I decided to call it “Grace” – an act of surrender and faith in love without analysing the script of life,” she reveals.

What makes the story etched in Grace even more poignant is that the author, craftily, does not conclude it. Grace, as she reveals, is but a moment in time, an experiential, that she wanted her readers to live.

“I wanted readers to experience and live that moment rather than an entire lifetime,” she says, adding, “That’s why I kept it open-ended, readers are free to draw any conclusion that they want.”

The author, who describes herself more to be instinctive reveals that Grace is a contemporary work of fiction that looks into relationships without judgement and apology.

Defining her book as a confidant, a voice and a story that is present in each individual, Singh says that there have been people who have come up to her hankering for the real identity of Kavita, the protagonist.

“Many women readers have even told me they identity with her character and her choices. Kavita and Rana are close acquaintances who meet by chance at Pune and share a part of their emotional journey. This is not uncommon, right?”

Grace is also a journey in evolution. Kavita’s metamorphosis through the five men that she meets in her life, including Rana has been mapped out in the novella. From being an emotional, naive, vulnerable girl who is not bereft of the strength to survive disappointments in her life, Kavita becomes wiser and when she is presented in the book, she is, perhaps, at her strongest.

“And that’s why she has the last laugh,” Singh says.

Grace, to the author, represents a multitude of things. From the drams that come true if one perseveres, Singh defines the novella as her ‘fulfillment’.

“Grace is about hope that no matter how difficult life can get, no matter how many times our heart is broken, there is always a ray of hope. There is probably no single soul mate but every intimate relationship is special and can guide us to become stronger human beings. Grace represents the celebration of victory over the battles of life.”

As for what’s next, Singh says that she is working on ‘Bani’, a novel based on her grandmother’s life.

“It is breathing a life of its own and evolving into a beautiful mysterious romance.” “Then I am writing on Kolkata’s Page 3 life – I want to call it “Kolkata Kitty”. Then there is one more romantic novel in my head – let’s see when I finish this,” she concludes.