The Arctic, Russia, the Nordic countries and Canada would be temperate, safe havens, which survivors would fight to access. 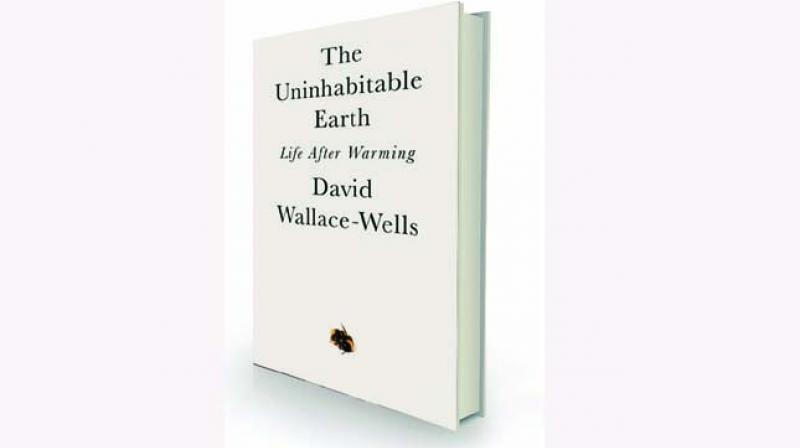 This book will jolt you awake, quicken your heartbeat and embed niggling worms of anxiety in even the most sanguine of persons.

The author is a gifted, American, climate journalist. He grabs your attention in the very first paragraph and keeps it for the next 231 pages of text followed by 66 pages of notes, which beg you to dig deeper.

His matter-of-fact style and complete lack of posturing appeals as he lets you into his treasure-trove of information on the nature and philosophy of climate change and its impact on society, people and places. This book is not, however, about the science of climate change which is riddled with “known-unknowns” — like the exact nature of the link between carbon emissions, warming and climate effects and many more “unknown-unknowns”, all of which make climate modelling dodgy and error-prone.

A superb introductory and an even better closing chapter, book end this racy read. Twelve engaging and informative chapters, with titles like “Heat Death”, “Hunger”, “Wildfire”, “Dying Oceans”, and “Climate Conflict”, flesh out the many ways nemesis can bring the consequences of global warming up close and personal.

The author’s facility with words and his humour, lighten the otherwise-charged narrative around what could mean the extinction of human life in less than 80 years from now though it is a mere blip in our planet’s long history.

Less than 20 years remain to roll back carbon emissions to one half of 1990 levels and preserve the Arctic permafrost, without which, 1.8 trillion tons of the trapped methane will rip into the atmosphere tipping us irreversibly over the edge.

Earth has been there before. Four of the previous five mass extinctions on were caused by a build-up of carbon emissions. 250 million years ago a warming of 5 degrees Celsius triggered mass extinction. It can happen again.

The scientific community, the United Nations and the broad coalition of governments and industry are not telling us the whole truth asserts the author. They postulate that keeping global warming — a phenomenon closely associated with the burning of fossil fuel — within two degrees Celsius above pre-industrial levels, can tame climate change. But we are on track to cross that threshold to a warming of six degrees Celsius by 2100, because of the enormous amount of carbon (400 parts per million) which already exists in the atmosphere.

Earth was this hot 16 million years ago. The sea level rose 130 feet. Small islands drowned and coastlines contracted sharply inland. But this is just one aspect of nature’s response. Intensified heatwaves and drought, particularly in a band along the equator, would make most of Africa, Asia and Latin America unliveable. The Arctic, Russia, the Nordic countries and Canada would be temperate, safe havens, which survivors would fight to access.

How many of us will remain after the Armageddon? The global population was just one billion in 1820. We are set to go from seven billion today to 12 billion by 2100. Possibly not more than three billion could subsist on what remains of Earth in 2100 because food production could dip by more than 50 per cent.

Curiously, the author remains confident that a civilisation smart enough to pollute Earth more rapidly over the last 200 years than ever before would also be able to find ways out of the self-created mess. The assumption is heroic but somewhat overstated. But humans, especially Americans, are not used to failing.

And yet, the assumption of human dominance resonates. The top eight per cent own 85 per cent of global wealth. There is much scope for income redistribution to dilute the impact of a climate disruption-related 50 per cent drop in economic output. More likely is the rapid reduction in population to sustainable levels, tragically, mostly of the poor, through new diseases and early deaths.  Mass migration of the rich, the physically strong and the meritorious, to technocratic, boutique, climate-proofed strongholds could absorb small numbers and the associated species native to those locations. The author suggests that such expensively exclusive, adaptive options, even in a highly degraded Earth, trump escape to grossly inhospitable Mars, via Space X rockets.

How different would the resultant rump, human civilisation be? Would they be more careful with what remains of natural resources? Sadly, this seems unlikely. The core problem of collective human action, the tragedy of the commons and the indispensable brutality of markets to spur competition and efficiency are embedded deep in the human gene. These induce a race to the bottom. Human civilisation is 12,000 years old. But we have learnt nothing from history.

Can we postpone the day of reckoning? The author is hopeful. For every one degree Celsius of warming avoided we get to keep one per cent of global growth. The present value of doing so is around $18 trillion at a five per cent discount rate. This is the minimum we should be willing to spend to clean emissions from fossil fuel; expand green renewable energy and storage systems and provide incentives for all construction and manufactures to adhere to carbon emission standards.

Carbon capture and storage can scrub 90 per cent of the carbon emissions from fossil fuel use at a cost of just $3 trillion per year — just over three per cent of global GDP. Global public investment can scale up battery production to tide over the intermittent supply of renewable energy.

The author generously concedes that whilst climate change will affect us all, the environmental plunder which caused it was done by the top 20 per cent of the global population in high-income economies. A global carbon tax levied on per capita carbon emissions above an agreed level can finance supervise mitigation and adaptation actions.

There are fewer answers here than questions and opinions. But for the intelligent person, questioning the status quo is usually the first step towards resolution.  A must-read for those starting a family and their loved ones.