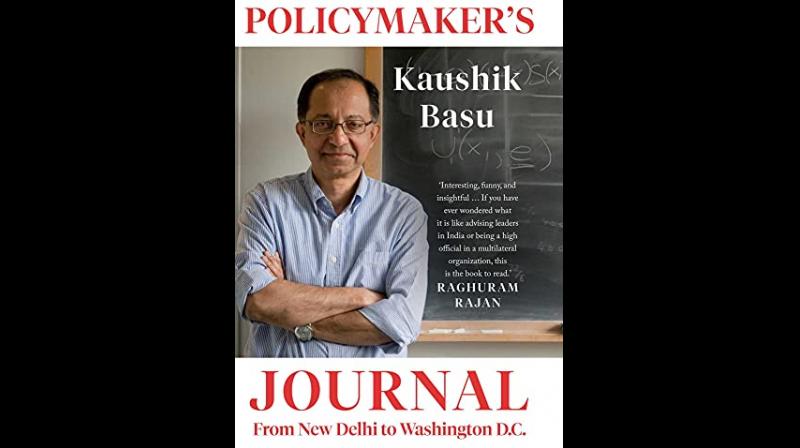 Policymaker’s Journal is in two parts. The first 215-page section, “The Delhi Years 2009-2012”, presents an insider’s view of India’s governance during an exciting period of history. (Image: Amazon)

Glory be, someone has found something good to say about Air India. According to Kaushik Basu, it has “the best collection of old Hindi film songs, dripping with romance, culturally diverse with strains of the Islamic and Persian, influenced by the music and poetry of Rabindranath Tagore, with touches of jazz and rock.”
Nevertheless, he thinks India’s national carrier “is a real dismal story, guzzling money and delivering poorly” that should be privatised but can’t “for force of habit”. Does that mean that too many highly-placed Indians benefit from even the airline’s decrepitude? The UPA government’s chief economic adviser before becoming a jet-setting World Bank executive should know. The Indian Express rated him “the 40th most powerful person in India”; a Bangladeshi economist called him “the Shah Rukh Khan of academics”.

He is a delightful raconteur whose diary straddles many walks of life. He tells you on page 237 that he is “familiar with “lower middle-class homes” in Delhi, Mumbai and Kolkata; only two pages later, Bill Gates invites him to dine “completely out of the blue”, booking a whole floor of the Taj Restaurant in Washington’s Georgetown for the occasion.

The seeming flippancy of this Panglossian flow is misleading. Basu’s head is screwed on the right way. At a personal level, his canny comment “No one can say what you said is wrong because no one can understand what you said”, recalled a former editor of mine who disclaimed responsibility for my editorials with the plea that although we had discussed the topic, he hadn’t committed himself. “I don’t finish my sentences, so that I can’t be quoted!” he admitted.
Professionally, through the banter and badinage runs his conviction that the Bank’s high salaries are not inconsistent with the ideal of bridging the gap between rich and poor.  He persuaded the Bank to adopt the twin targets of eliminating extreme poverty by 2030, and “promoting shared prosperity”, measured by the well-being of the bottom 40 per cent in each country, with an added commitment to issuing annual data on the second indicator. Sadly, his proposed Living Life Index (matching the Bank’s popular Doing Business report) to measure what daily interaction with the authorities costs ordinary folk fell through. As did his suggestion of taking a lenient view of certain bribe-givers.
This is not meant to be a serious study. So Basu’s claim of never actually seeing any incidence of government bribery is as relevant as my recollection of an elderly woman telling the English divorce court I was covering as a young reporter that she found her daughter crying when she took in the morning tea because her son-in-law had beaten her. Had she actually witnessed the assault, the judge asked. “Now I ask yer” that lower middle-class woman retorted contemptuously to the bewigged and berobed judge, “would yer beat yer wife in front of her own mother standing on the carpet with the tea tray!”

Manmohan Singh, Amartya Sen, Rabindranath Tagore and Satyajit Ray are Basu’s heroes. He compliments Priyanka Vadra on her modesty and Rahul Gandhi on not seeking power. He defends dynasty in exactly the same language Indira Gandhi used to justify Sanjay. Narendra Modi doesn’t come off quite so well. But he is second only to Nitish Kumar as a speaker. Slightly — only slightly — more damning, his “speech had a rabble-rousing quality that was unmatched”. However strong the diarist’s loyalties — and politics — the electoral system turns politics into a merry-go-round.

No, there are no flies on Basu, as they say, although he could perhaps have been more judicious in his choice of blurb writers. The economist James K. Galbraith is, of course, impeccable, which is all the more reason for heeding his warning that blurbs “are rightly untrusted”. It all depends on what the blurb writer stands to gain from the association.

Policymaker’s Journal is in two parts. The first 215-page section, “The Delhi Years 2009-2012”, presents an insider’s view of India’s governance during an exciting period of history although rumbles about the role of the World Bank and International Monetary Fund are avoided as are rumours of back-biting resistance in Delhi. Given his antecedents, Basu must have been at home in the Lutyens milieu: his father, a former mayor of Calcutta and Speaker of the West Bengal Assembly, was described in a property case in Calcutta High Court as "very rich" and, by the trial judge, a man of "social status”.

Part Two, “The Washington Years 2012-2016”, roams in a star-studded global panorama. But there are points of contact. When “furor (sic, Basu prefers American to English) broke out in India” in January 2015 because President Obama treated Modi to a lecture on democracy and inclusiveness, it was because Basu had tipped him off at a private White House briefing.

The diarist’s wry humour, subtle innuendos, jokes at his own expense and muted literary allusions are reminiscent of the Yes Minister series. But it also reads too much like Taki’s “High Life” column in The Spectator not to prompt questions about squandering public money and the world’s financial architecture. Some qualm of conscience prompts Basu’s admission that instead of “Our dream is a world free of poverty”, the board in the World Bank’s main entrance should read, “Our dream is a world free of poverty, and our nightmare is that the dream will come true.”

New Zealand’s Robert Muldoon warned long ago that “civil disorder is inevitable” if the Bretton Woods system isn’t revisited. This saucy diary is a reminder that his jeremiad shouldn’t be forgotten.