The new Maruti Suzuki Ciaz — with a few cosmetic changes — looks and feels like a premium petrol sedan. 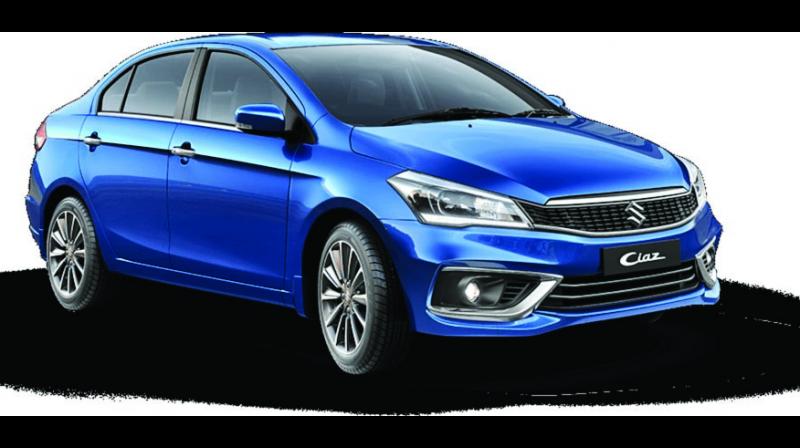 The Maruti Suzuki Ciaz, which was originally launched in 2014, has been one of the most desired sedans in the Indian car market. It has been the sales leader too as it consistently been beating its rivals in the segment. A few months back, Maruti gave Ciaz few cosmetic changes and we got a chance to drive it on Delhi roads to see if the updates are going to be enough to keep the competition at bay.

Even before the facelift, The Ciaz has been one of the most attractive and stylish car. At the front, it gets a wide and slim grille, which does improve the face of the Ciaz marginally. From there, the shapes of everything remain the same, but small bits have been chromed or re-appropriated to make the new Ciaz look even better. All these changes are only available in the top-end Alpha variant. Models at the base level still use the same headlights, taillights and black plastic cutouts on the bumpers.

On the inside, the standout element is the lighter wood-ash plastic trim across the dual-tone dash. The Ciaz was already available with the SmartPlay infotainment and reversing camera, but what is new is the colour 4.2-inch display between the dials, borrowed from the Baleno. Apart from showing little dials with real-time power and torque outputs, and efficiency information, it also shows you just how the Smart Hybrid system works. Space is easily the selling point of the Ciaz with large comfortable front seats and a plush rear bench. Legroom in the back will be most appreciated, though headroom isn't the best since the seats seem a little high set.

The Ciaz gets 1,462cc K15B petrol engine, with an updated Smart Hybrid system that uses an additional lithium-ion battery for deeper charge/discharge capabilities, resulting in being useful more often. The engine itself is very quiet and refined. For a comparatively large engine, it doesn't have the outright bottom end you'd expect, instead offering just enough to get the job done. The motor feels most alive between 2,500-5,500 revs. If we talk about, its acceleration, It did prove to be surprising as it goes 0-100kmph within 11 seconds.

Well, there nothing new on ride and handling, having said that, the Ciaz is still is very comfortable and extremely confident when it comes to taking hard conditions of Indian roads. The suspension is set up on the soft side that gives you the extra degree of plushness. Steering that's heavy at low speeds adds up to the perfect weight for city and highway speeds. It's not very communicative but the plus point is that it never feels fidgety or nervous. Overall the new Ciaz provides you with a burst of enthusiasm, but it is the calm and serene experience that the Ciaz provide you with the best.

Maruti Suzuki has done a good job with beautification on the new Ciaz. The car looks and feels much more premium, and the new mild-hybrid petrol engine and the overall package does make for a compelling look at the new Maruti Suzuki Ciaz. The prices for Maruti Suzuki Ciaz petrol start at `8.31 lakh for the base petrol variant.