Duacti 1260 Enduro gets your blood racing

Ducatis are insanely beautiful and their styling is really impressive. 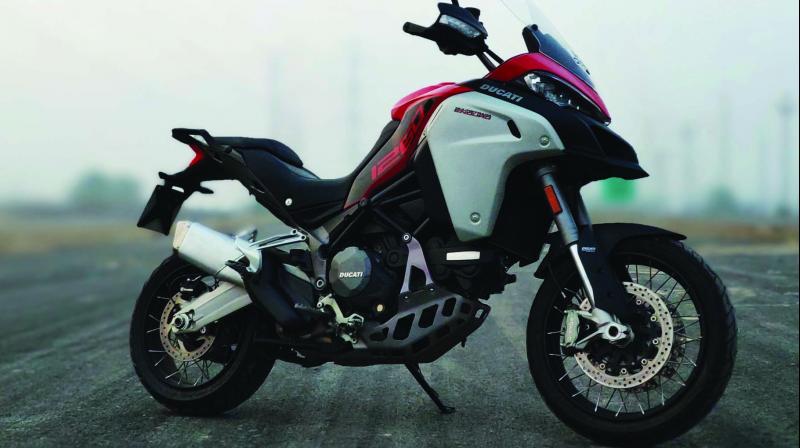 17 years ago when Ducati launched its first Multistrada, it seemed that it was as close to off-road as Ducati would ever get, but with time it just got better and better. And almost after two decades, Ducati gave an impressive update to its new and improved Multistrada line-up and gave us 1260 Enduro, just like its road-biased sibling the Ducati Multistrada 1260S. If we can define this bike in more simple terms, it is a bike that Ducati have pointed squarely at the dirt. We recently got a chance to ride the updated Enduro on curvey roads to see if it ticks all the right boxes?

Deign
Let us start this topic with a fact, when it comes to design, Ducatis are insanely beautiful and their styling is really impressive and the Multistrada Enduro is a great example of the synergy between form and function. One may assume a purpose-built adventure tourer should look like an ungainly mass of exposed frames and other odd body panels. Its signature LED headlamp, fairing, beak, deeply scooped seat and sleek tail section are reminders that a globetrotting motorcycle can look good. And this is without taking away any of the long-distance comforts you’d expect from an ADV.

Enhancement
One of the major change that Multistrada received is the 1,262cc, Testastretta DVT V-twin engine, which it borrowed  from Multistrada 1260, that is capable of producing 158 hp of power and 128Nm. Its heart also received full torque curve and a renewed chassis for greater ease of riding at low speeds or when manoeuvring, which gives an improved performance. The engine offers 85 per cent of its peak torque output between 4,000 and 6,500rpm. To give you a perspective, we’re talking about offering the peak torque of a litre-class superbike, just 4,000rpm onwards, which sounds crazy! Throttle response has been smoothened further to let you put all the power down easily. Of course, electronics have been tweaked as well. There’s four riding modes, Sport, Touring, Urban and Enduro which can tailor your riding experience depending on the conditions.

Performance
For those who want to use it as a commute, the relaxed throttle response in Urban mode, along with the engine’s stronger mid-range torque (between 4,000rpm-6,000rpm) helps in everyday city traffic. Touring mode is ideal for long journeys, while ‘Sport’ makes this Multistrada think it’s a sport bike built to set lap times. As soon as you open throttle, its L-Twin engine will blow your mid. Why? Well there are plenty of reason, such as , character, power, manouvering abilties, relentlessness, precision, balance and control in eating many kilometer at high speeds. But, when you find yourself wandering down a trail, the Enduro mode just transforms the motorcycle – and how! It instantly feels easy to ride as the throttle response feels crisper and more measured, making it easier to control what the rear wheel is doing. And in case you get a little ham-fisted, the electronics cast such a wide net that you don’t spend half the time fretting about dropping the bike. This is especially good for someone cutting their teeth on the enthralling world of trail/off-road riding.

Verdict
Riding this bike reminds us of what made us like motorcycles in the first place. The combination of all-day comfort, true sportbike performance, ability to explore in the dirt, and little touches of Italian style make the Ducati Multistrada 1260 enduro a machine worthy of any adventure tourer’s consideration. At `19.19 lakh (ex-showroom, Delhi), The Multistrada 1260 enduro is sure a little expensive ADV when you compare it to its competitions, but the ride quality it provide it sure worth every penny. The Multistrada 1260 Enduro has managed to ups its game a couple of notches. Engine performance is excellent, on and off-road, while the revised gearing and quick shifter help immensely. Overall, the motorcycle looks stylish, is very powerful, brilliant handling on the tarmac and could go places where most motorcycles won't dare to.