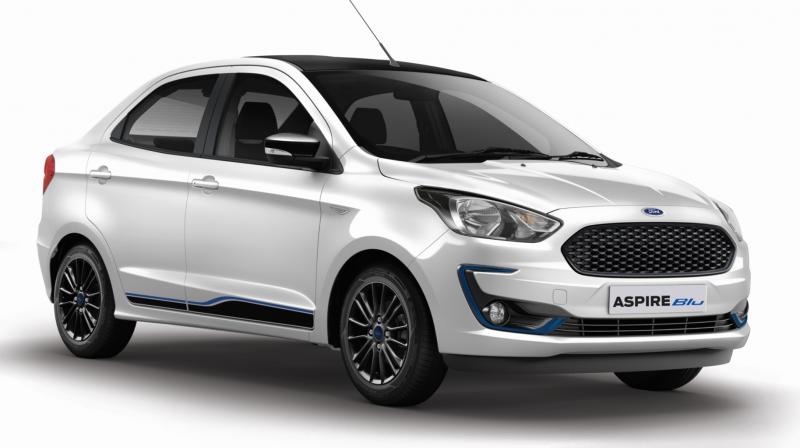 Pune: Ford, the American car maker introduced a new special edition for the Aspire compact sedan, badged the Aspire Blu to boost sales in Asia's third biggest but fiercely price conscious car market. The new variant is priced at Rs 7.51 lakh for the petrol and Rs 8.31 lakh for the diesel version.

In the compact sedan segment, the Ford Aspire, and the new special edition Blu variant, rivals the likes of the Maruti Suzuki Dzire, Hyundai Xcent, Volkswagen Ameo and Honda Amaze.

The new Aspire Blu borrows the sporty design cues from the Figo Titanium Blu with black-finished elements such as the mesh grille, alloy wheels, roof and wing mirrors. Other borrowed design include blue highlights on the front bumper, along with black and blue graphics that run along the bottom of the doors/boot.

The car is equipped with a 7.0-inch touchscreen infotainment system with folding wing mirrors are standard. Unlike the 6.5-inch infotainment system that gets Ford's SYNC 3 exclusive to the top-spec Aspire Titanium+ trim, this 7.0-inch unit misses out on Android Auto and Apple CarPlay compatibility.