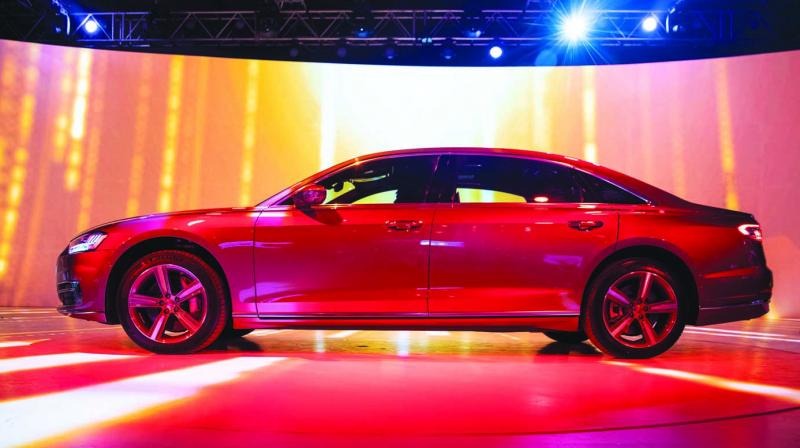 After launching the Q8 SUV last month, Audi, the German luxury car maker, has introduced its new fourth generation flagship A8 L sedan in the Indian market to take on compatriot rivals such as Mercedes Benz, BMW, among others.

With a price tag of Rs 1.56 crore at pan Indian showroom, the Audi A8 luxury sedan competes with the Mercedes-Benz S-Class, BMW 7 Series, Jaguar XJ L and Lexus LS500h in India.

After Audi A6 and Audi Q8, the Audi A8 L is the third BS6-compliant vehicle from the German luxury car's stable in the country.

“The new A8 L marks the dawn of a new design era for brand Audi,” Balbir Singh Dhillon, Head of Audi India, said.

The car, which is sophisticated, technology and feature rich, has been fundamentally re-engineered and it now boasts larger dimensions and is heavily customizable, he pointed out.

The A8 L is powered by a 3.0-litre turbocharged V6 petrol engine that is mated to an 8-speed automatic gearbox and comes with a permanent all-wheel drive system.

The A8 long-wheel base model gets a more prominent hexagonal grille, sleeker headlamps (which are now HD Matrix LED units), sharper and tighter surfacing and slimmer OLED tail lamps connected by a full-width light bar.

The sedan focuses on rear passenger comfort with a twin-touchscreen rear seat entertainment package, remote control to operate numerous convenience features and a footrest mounted on the backrest of the front passenger seat with a foot massager. Standard safety features include 8 airbags (there’s an option for two more aribags), ABS, traction control, ESC, hill-start assist and a surround view camera with 3D view.