The Rolls-Royce Cullinan looks just like we imagined it would: big, tall, and quintessentially Rolls-Royce. 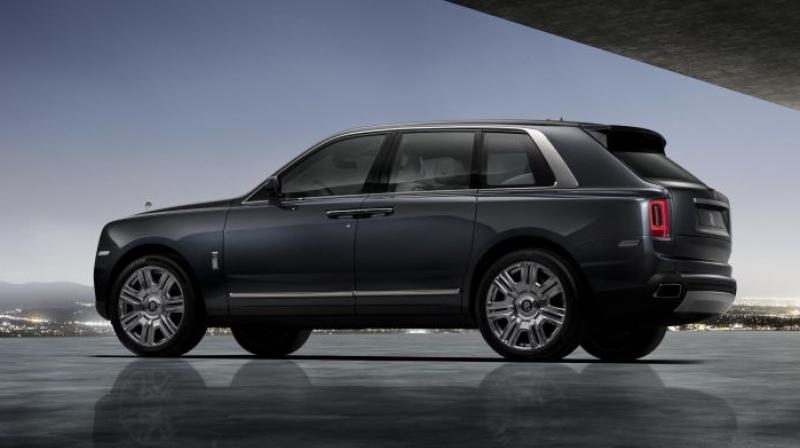 The car is considerably bigger than even the Bentley Bentayga.

The Cullinan marks an important day in the history of Rolls-Royce. The ever increasing allure for SUVs in the world seems to have caught the attention of the top brass at RR. Luxury and adventure do not necessarily go hand in hand, or do they? The priority of any SUV is to carry that go-anywhere attitude with it but, can it do all that while delivering on the comfort and opulence front at the same time? Well, Rolls-Royce says a big yes to this by claiming its first-ever SUV, the Cullinan, as “Effortless Everywhere.”

So, what is the RR Cullinan about?

Well, for one, it is BIG. The car is considerably bigger than even the Bentley Bentayga. And, it had to be. You see, all Rolls-Royce cars look average-sized when standing next to each other, but the moment you park any of them next to regular luxury cars, the size hits you. Imagine that, but with SUVs.

The face of the Cullinan gets the hand-polished stainless steel grille from the RR family, but here it is set slightly proud of the surrounding bodywork, up and forward. The Rolls-Royce badge and Spirit of Ecstasy too are significantly above the line of the bonnet, which in their mind is to "give them a unique vantage point."

Being a Rolls-Royce, it gets all the bits and bobs of being a typical one. Named after the largest diamond ever discovered, which now resides in the British Crown Jewels, the SUV too gets premium luxury. You can get your Cullinan in two rear configurations: lounge seats or individual seats. The lounge seat is a bench-like configuration with space for three passengers in the rear. The individual seat configuration gets a fixed rear centre console which holds... you guessed it, a drinks cabinet with Rolls-Royce whisky glasses and decanter, champagne flutes and refrigerator.

Inside, you have a typical RR interior. There is a thicker, smaller steering wheel for better off-road control. The entire backrest panel of the seats has been crafted from a single piece of leather and the front door armrests, front centre console lid, lower C-Pillar, rear side and centre armrests, seats and the steering all get heating functionality.

It also gets the latest generation of digital instrument clusters, first ever in an RR touchscreen centre console and a new Spirit of Ecstasy controller to physically control the systems. There’s also an ‘Off-Road’ button, Hill Descent Control button and Air Suspension height adjustment controls in the centre console.

The rear seats are higher than those in the front of the car. This is called Rolls-Royce’s Pavilion Seating, so the passengers get a good view of the outside from the high glass area, which includes a panoramic sunroof. The occupants also get five USB ports around the cabin, whilst phones can be wirelessly charged at the front of the cabin.

Driving the RR Cullinan is a 6.75-litre twin-turbo V12 which produces 571 PS of power at 5,000rpm and a massive 850Nm of torque at just 1600rpm. The power is sent to an all-new, all-wheel drive, all-wheel steer system for all-terrain driving. Top speed is limited to 250kmph.

To offer the famous RR ‘magic carpet ride’ even in off-road conditions, the Cullinan is built on a lighter all-aluminium architecture and has been given the latest generation self-levelling air suspension. It gets larger air struts with more air volume to cushion the blows of the toughest of terrains. RR claims that the suspension makes millions of calculations every second as it continuously varies the electronically controlled shock absorber adjustment system, reacting to body and wheel acceleration, steering inputs and camera information. On off-road conditions, the electronically controlled shock absorber adjustment system even pushes down any wheel which it detects is losing traction.

There is also an ‘Everywhere’ button, which "unleashes all of Cullinan’s off-road capability" with just one click. The Cullinan also gets a water-wading depth of 540mm. And because the Cullinan rides high, it lowers itself by 40mm when you unlock the car, to make ingress easy.

Also, for some reason, RR has put a lot of effort to call it the first “three-box” car in the SUV sector, with the luggage compartment being separated via a glass. This lets the cabin stay better insulated in terms of noise -- and for some reason they want the cabin to remain cool even when the tailgate is open. Speaking of which, this is the first ever RR to feature an opening tailgate, now called ‘The Clasp’. This also mimics the time when the wealthy used to not carry their luggage with them; it would be carried for them, behind them.

The rear seats also fold down – a first for Rolls-Royce. The SUV has a luggage capacity of 560 litres, 600 with the parcel shelf removed and 1930 litres by electronically folding the rear seats and raising the boot floor to meet the seat base. This also gives it a loading length of 2245mm. RR also claims that this loading length is longer than that of a Range Rover Vogue Extended Wheelbase.

To conclude it all - It’s big, it’s capable, it’s ultra luxurious and it is going to be very, very costly. A perfect new toy for the 1 per cent to cherish. Expect it to launch in India next year, with a price tag close to Rs 5 crores.