Business   Autos  14 May 2019  Kia SP2i design Sketches out! in tune with the concept
Business, Autos

Kia SP2i design Sketches out! in tune with the concept

The official design sketches give us a glimpse of what to expect from the production-spec SUV. 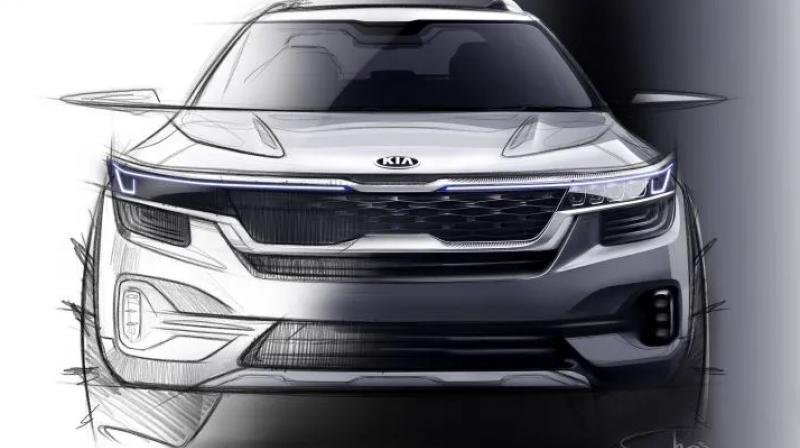 Kia has shown a glimpse of the official design sketches of the SUV.

Kia will mark its debut in India with the much anticipated compact SUV based on the SP Concept. The concept was first unveiled at the 2018 Auto Expo. Dubbed the SP2i for India, the new SUV is all set for the Indian market and today, Kia has shown a glimpse of the official design sketches of the SUV.

From the looks of it, the latest offering in the highly competitive compact SUV segment is shaping up to be quite a looker. The sketches of the production version reveal that Kia has tried to incorporate most of the design elements we saw and appreciated in the SP Concept. It gets the famed tiger-nose grille up front, giving it a distinctive look. Flanking the wide grille are the extended LED bands which are placed above the sleek headlights which have a unique signature.

We already saw most of these design elements on the near-production SP Signature concept as well and it is nice to see that Kia has retained them in the final production version as well. Not only do they give the SUV a premium appeal, they also provide a solid character. Even the bumper at the front has a chunky look to it. It houses vertically stacked fog lamps along with a skid plate, which is bound to enhance the SUV’s road presence.

Come to the rear and the sketches highlight the overall wide stance of the upcoming SUV. Expected to be wider and larger than the Hyundai Creta, the SP2i gets a split tail lamp setup at the rear, like many modern and premium SUVs. It also features a unique LED signature in the tail lights, giving it a distinctive look. The Kia badge sits bang in the middle of the tailgate and is likely to get a chrome surrounds. Look a little lower and you’ll find dual faux exhausts lined with what might be chrome accents again. The rear bumper also houses a skid plate to maintain the rugged SUV appeal.

While that is all the sketches have revealed, we already know from the spy shots of the test mules that the SUV will get machine-cut, multi-spoke, 17-inch alloy wheels, a shark fin antenna and disc brakes on all four wheels. Expected to be called the Trailster or the Tusker in India, the SUV will get both petrol and diesel engines at launch. Kia has already stated that these will be a set of BS6-ready 1.5-litre petrol and diesel engines. While there is no confirmation yet, it can also spawn a plug-in hybrid version of the SUV in the future.

Expected to be launched by September this year, the first-ever offering from Kia in the country looks to disrupt the already booming compact SUV segment. When launched, it will not only face stiff competition from its Hyundai cousin, it will also look to outsell the likes of the Maruti Suzuki S-Cross, Nissan Kicks, and the Renault Duster. Expected to be priced between Rs 10 lakh to Rs 16 lakh (ex-showroom), it would also have mid-size SUVs like the Tata Harrier and the upcoming MG Hector in its sights.