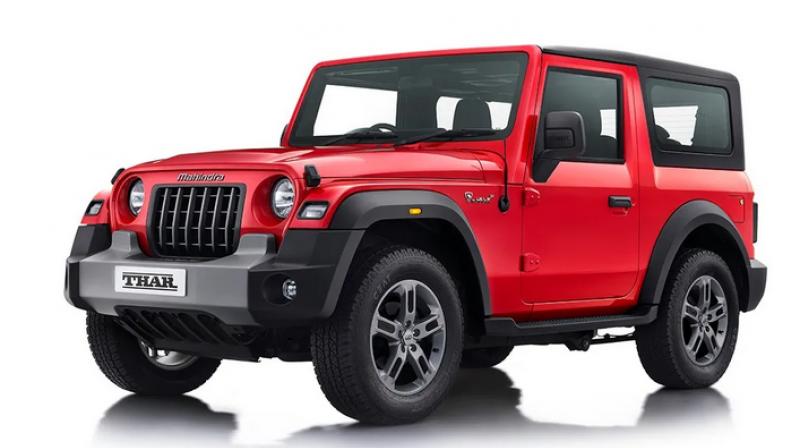 New Delhi: Home-grown auto major Mahindra & Mahindra (M&M) on Saturday unveiled the all new version of its iconic SUV Thar, which it plans to launch later this year.

The model, which comes with all new exteriors and interiors, will debut in the country on October 2.

The diesel variants would be powered by 2.2 litre engine while the petrol trims would come with all new 2 litre powertrain.

While the diesel motor will generate 120 HP of power, the petrol Thar will see an output of 150 HP of hauling strength.

"Today, with the unveiling of the all-new Thar, we rewrite history once again. The model is firmly rooted in our rich automotive heritage and upholds the Mahindra DNA in its purest form," M&M Managing Director Pawan Goenka said.

The model has been designed and engineered in India and even most of the components used in the vehicle have been sourced locally, he noted.

The model, which will be rolled out from the company's Nashik plant, will not only attract die-hard Thar enthusiasts, but will also appeal to all those people who have always dreamt of owning an iconic vehicle, with all the bells and whistles of a contemporary SUV, M&M said.

The new Thar comes with a hard top, a first-in-class convertible top and an optional soft top. It also features new seating options -- 4 front-facing seats and 2 plus 4 side-facing seats.

"With the all-new Thar, we aim to protect this legacy with superior performance both on and off the tarmac, advanced technology features, excellent safety and everyday ride comfort, all adding to the unadulterated driving pleasure of a true-blue modern SUV," M&M Automotive Division CEO Veejay Nakra said.