All details about the new Ertiga, albeit for the Indonesian market, were accidentally revealed - good for us! 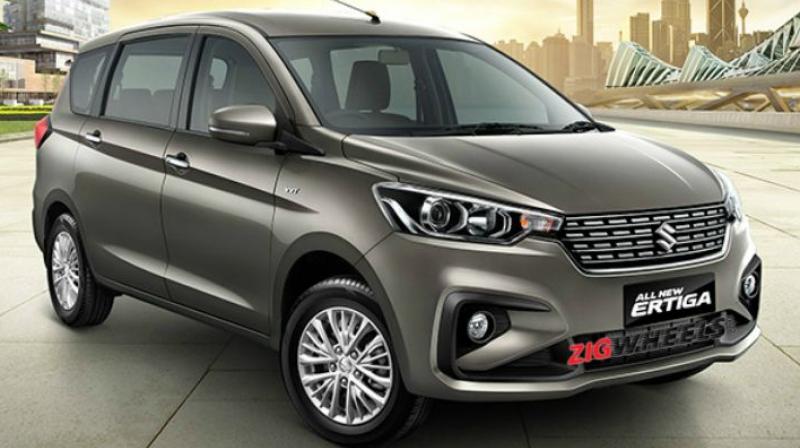 So, here’s everything you need to know about the upcoming new Ertiga.

The 2018 Ertiga was scheduled to be unveiled on April 19 in Indonesia, but accidentally, all the information about the second-gen model was revealed on Suzuki Indonesia’s a day before. We were quick enough to spot it and get the information before the page was taken down. So, here’s everything you need to know about the upcoming new Ertiga. 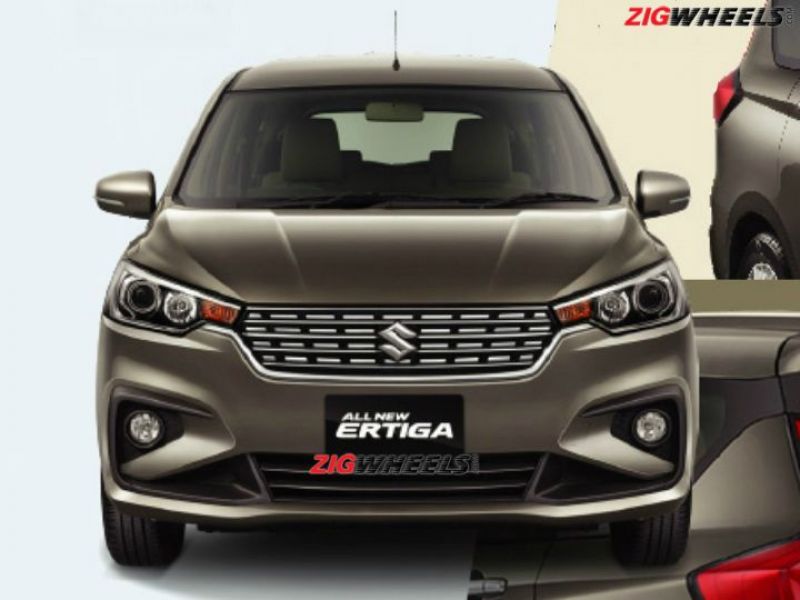 Suzuki’s designers have had to take a lot of inspiration to come up with the look of the new Ertiga, but the different elements do sit well together. No body panel has been carried over from the older MPV, though it still has the same silhouette. The Ertiga is underpinned by a variant of Suzuki’s new Heartect platform found under the bodyshells of the Ignis, Swift, Baleno and the Dzire in India. The new Ertiga is 99mm longer, 40mm wider and 5mm taller though the wheelbase has remained the same at 2740mm. The increased dimensions have improved interior space, especially the boot space (with the third row of seats up) which has gone up by 18 litres to 153 litres.

The new Ertiga does look smart, no doubt. Highlights at the front include the twin-pod headlights with projector lamps, a new chrome grille, a new front bumper and a muscular hood. At the side, the Ertiga may look a bit familiar to the older model, but looks less boring, thanks to some cuts and creases on the doors, new 15-inch alloy wheels, and a new rear three-quarter glass design. At the rear, the new Ertiga is as exciting to look at as its front. This is helped by the new taillamps which look like they have been directly lifted from the Honda WR-V, the new tailgate design and the new bumper. The taillamps have Volvo-like lighting theme, with ‘waterfall’ brake lights. Overall, the new Ertiga looks quite fancy on the outside. 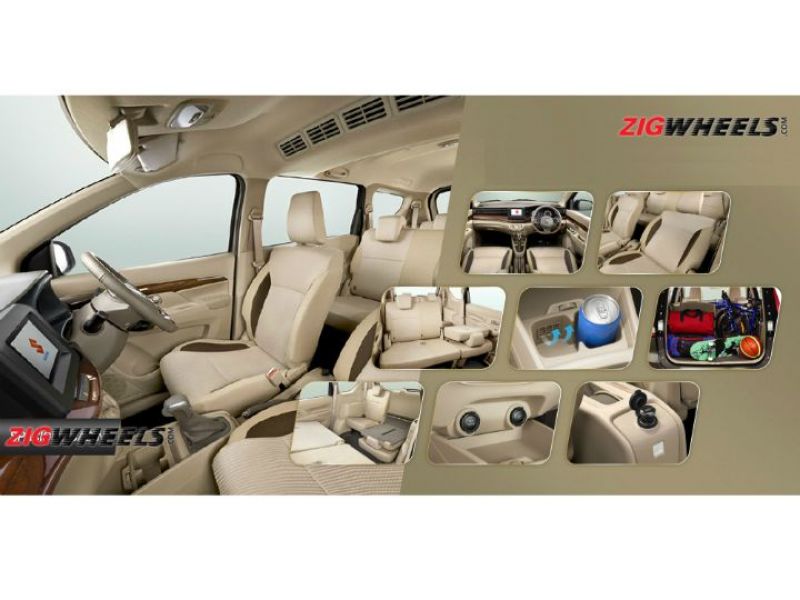 Inside, the Ertiga retains the beige interior theme but gets a completely redesigned dashboard. The highlight is the three-tier design with a taller upper dash with end-to-end A/C vents (ala Audi), a thick section of faux-wood and a lower beige bit. In Indonesia, the Ertiga will be fitted with a 6.8-inch touchscreen infotainment screen. Expect the Indian version to get the same 7.0-inch Smartplay system as the current model, though. The steering wheel is the same flat-bottom unit as that on the Swift and the Dzire, and so is the new instrument cluster.

Like the exterior, you will be hard-pressed to say that anything on the inside has been carried over from the previous model, except for the obviously old air-con controls. It seems like the Ertiga will not get an automatic climate control system even in this all-new version. 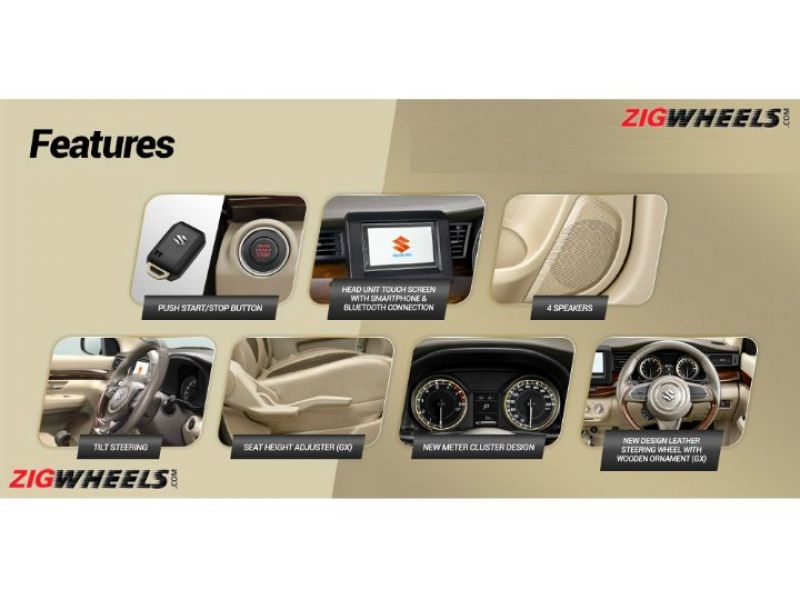 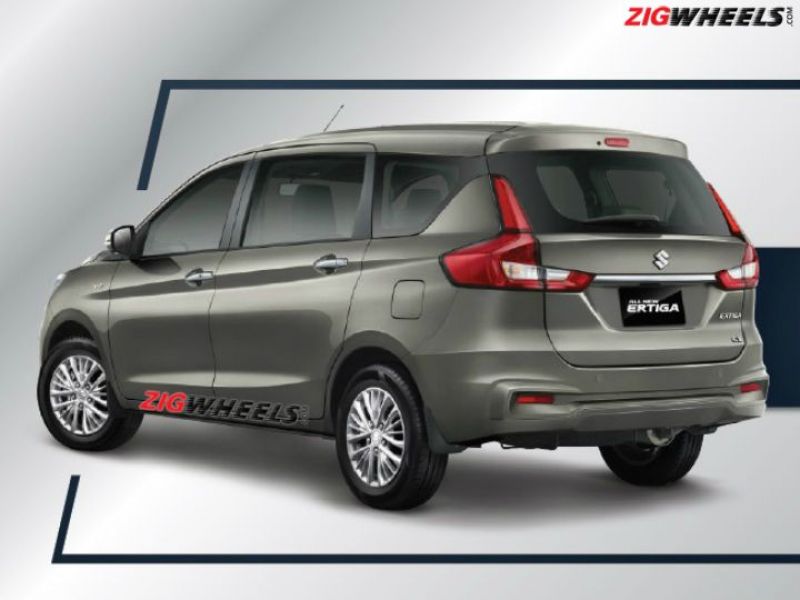 In Indonesia, the Ertiga is powered by a 1.5-litre, 4-cylinder K15B petrol engine developing 105PS of maximum power and 138Nm of peak torque, paired with either a 5-speed manual transmission or a 4-speed automatic transmission.

In India, though, the new Ertiga will continue to be powered by the same 1.4-litre, 4-cylinder 92PS/130Nm K14B petrol, paired with either a 5-speed manual or a 4-speed automatic transmission. The diesel variants, on the other hand, will be powered by the 1.3-litre, 4-cylinder turbocharged 90PS/200Nm D13A SmartHybrid engine paired to a 5-speed manual transmission. Maruti Suzuki is expected to launch the new Ertiga in India in 2018 itself.