Will be an off-road version of the RE Classic range 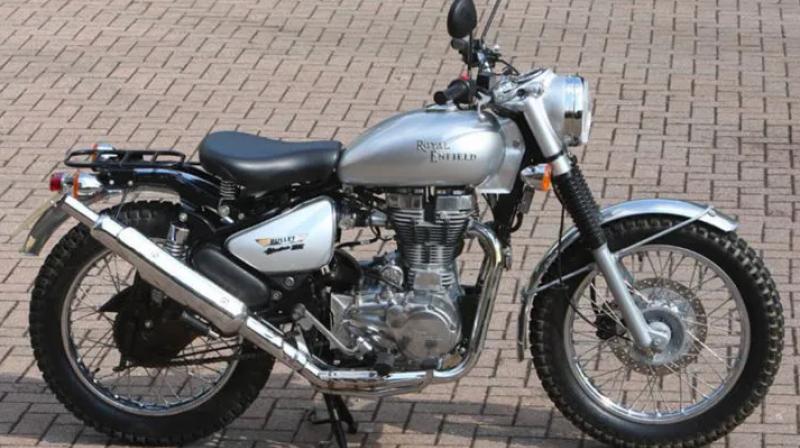 Might come at a premium of Rs 10,000 over the standard model.

Will get spoke wheels, dual-purpose tyres and upswept exhaust.

Might come at a premium of Rs 10,000 over the standard model.

The rear fender seems to be raised for a longer rear suspension travel. Gone is the pillion seat, replaced by a luggage rack. For better water-wading capabilities, RE has equipped the motorcycles with an upswept exhaust. And to cement its off-road capabilities, it will get 19-inch front and 18-inch rear spoke wheels, shod with dual-purpose tyres. While we didn’t get a closer look, the braking hardware appears to be the same 280mm front and 240mm rear disc, with dual-channel ABS as standard.

As stated earlier, the motorcycles will be based on the Classic range and hence will be powered by 346cc and 499cc single-cylinder engines. While the former churns out 20PS and 28Nm, the latter is good for 27.5PS and 41.3Nm. Both the motors come paired to a 5-speed transmission. However, we do expect the gearing to be slightly different and more tuned towards off-roading.

Considering all the changes, we expect the two motorcycles to command a premium of around Rs 10,000 over the standard models, which would result in a price tag of Rs 1.63 lakh for the 350cc, and Rs 2.11 lakh for the 500cc model. Once launched, the Bullet Trials range will be the only ‘scramblers’ in the country at that price point.