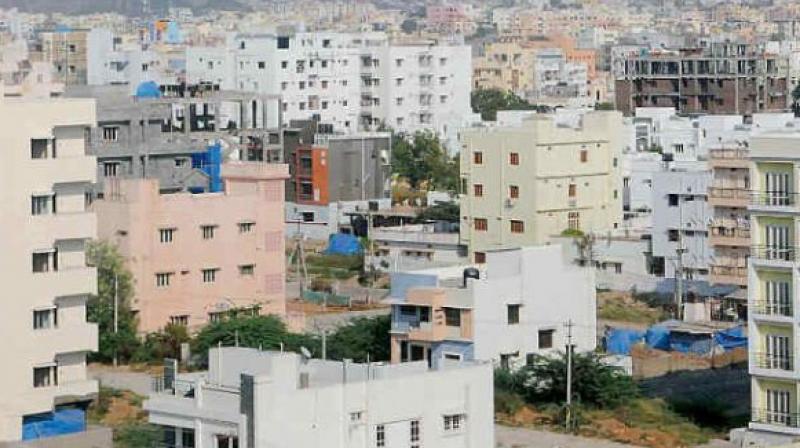 New Delhi: Developers expect housing demand to recover with the implementation of the real estate law from today as it will protect buyers from unscrupulous players, while prices will remain stable due to huge unsold inventory.

The two apex bodies of real estate developers  -- CREDAI and NAREDCO -- feel that the implementation of this law will bring paradigm change in the way Indian real estate sector functions, but see some "teething" problems initially.

The two bodies wanted the government to exclude ongoing projects from the ambit of the Real Estate (Regulation and Development) Act, 2016, passed last year by Parliament, but their suggestions were not included in the law.

"Its a paradigm change in the real estate sector. It will protect buyers who have purchased flats in the past. The regulator under the RERA should find ways to help complete ongoing projects and provide relief to home buyers," NAREDCO Chairman Rajeev Talwar said told PTI.

CREDAI President Jaxay Shah said the RERA will increase transparency in the sector and boost confidence of both domestic and foreign investors. He, however, said there will be some "teething problems", initially in implementation of this law.

Asked about the impact on prices, Shah said: "Supply will dip during this year but demand will improve as buyers will have increased confidence to invest in property market."

Prices will remain stable now but rates could rise by 10 per cent in next six months, he added. JLL Residential (JLLR) Chairman Anuj Puri said this law literally holds the key to the future growth of the Indian real estate as it has the potential bring transparency to  clean up the sector.

He said the time has finally come for homebuyers in India to breathe free and invest confidently. "No more will unscrupulous smaller builders or even larger organized developers be able to take buyers for a ride," he added.

Asked about the impact of this new law on supply-demand, Puri said the supply is expected to decline in the interim period, but demand will rise as home buyers and investors confidence will improve with implementation of this law.

"Prices will remain stable till unsold inventories are sold. This will take at least 9 months and thereafter we can see some upward movement," he added. JLL India CEO and Country Head Ramesh Nair said the RERA definitely needs to be implemented in letter and spirit by all the states as this law aims to clear opacity in the Indian real estate sector and make it more buyer-friendly.

Anshuman Magazine, Chairman, India and South East Asia, CBRE, said, "In the long run, we feel that the establishment of a regulator will prove beneficial for the sector. With

investor confidence returning to the sector, resulting in greater institutional capital inflows in the long term, we can expect to see the segment in revival mode."

However, he said the developers may be cautious initially about announcing new launches till they get a proper understanding of RERA’s various components. According to Tata Housing's Head of Marketing Services, Rajeeb Dash, unorganised or small developers will find it difficult to manage their businesses after the implementation of RERA.

"With RERA coming in buyers or investors will look at branded projects as they do not want to get stuck. Smaller players or the unorganised market will find it difficult to survive in such a situation. "We will witness a lot of mergers and acquisitions.

Though wiping out of the small players will take time, may be 2-3 years, but there will be an impact," he said. Dash further said many developers will tie-up with branded players as partners.

Sunil Sharma, VP-CRM & Marketing, Mahindra Lifespaces, said, "With demonetisation behind us, the Indian real estate sector is showing early signs of revival. The implementation of the Real Estate Act 2016 can accelerate growth in end-user and investor interest, leading to overall gain in momentum for the sector."

The RERA is a progressive law, which will make project registrations mandatory, with a clear timeline for completion, and specifications published, PropTiger.com Chief Strategy Officer Sunil Mishra said, adding that this legislation will benefit buyers, developers and agents.