To target GDP growing up to 10 per cent by 2023-24, the total investment requirement is estimated at USD 5.74 trillion. 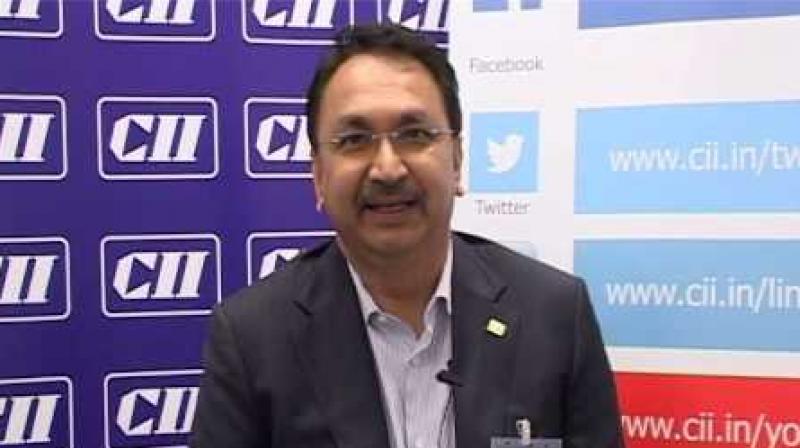 CII President Vikram Kirloskar said the private sector is facing difficulty in getting land for manufacturing units and the states have a huge role to play and there is a need to create land banks. (Photo: File | Youtube screengrab)

New Delhi: With the Modi government beginning its second innings with a greater mandate, the industry on Monday pitched for a series of reforms, including in critical areas of land and labour, to take India's economic growth to double-digits in the next five years.

To target gross domestic product (GDP) growing up to 10 per cent by 2023-24, the total investment requirement is estimated at USD 5.74 trillion (around Rs 397 lakh crore) for the next five years, CII President Vikram Kirloskar told reporters here.

It is critical to continue with the same pace of reforms, he said, adding the kind of mandate this government has received from the people, "we wish the government will undertake reforms in the areas of land, labour and capital".

He said the private sector is facing difficulty in getting land for manufacturing units and the states have a huge role to play and there is a need to create land banks.

On labour reforms, he suggested for the formulation of national employment policy and encourage states to provide fixed-term employment besides incentivising companies for creating employment.

Besides, the government needs to bring in Direct Taxes Code (DTC) and the last leg of reforms in the GST.

Strong action to spur consumption, investments and net exports will take GDP growth rates much higher and this is the right time for India to think big and envision GDP growth rate of 10 per cent to greatly improve development outcomes, he said.

"With a landslide electoral victory and new Council of Ministers in place, we expect the government to engage strongly with industry to ideate and implement impactful policy solutions for double-digit growth," Kirloskar said.

India's economic growth in the January-March quarter of 2018-19 slowed to a five-year low of 5.8 per cent due to the poor performance of agriculture and manufacturing sectors.

"Consumption will be greatly encouraged by reducing the personal income tax burden, adding more disposable income for consumers," he said.

He added that various government initiatives including PM KISAN to double the farmers' income by 2022 will help drive rural consumption and generate demand.

Commenting on rationalisation of taxes on equity, CII president-elect Uday Kotak said that equity is costlier than the debt due to the imposition of various taxes.

On concerns over shortage of liquidity, Kotak said it is available but at a higher cost so there is a need to increase the quantum and also ensure avoiding distortion or crowding out.

"In the last 24 months, the big success area of this govt has been the small saving schemes. A very large amount of money has moved into small savings which are financing the fiscal deficit. In most of these schemes, the rates are higher than 8 per cent. However, bank deposits competing for financial saving provides 7-7.4 per cent," he said.

The ability of banks to drop deposit rates are linked to the interest rate offered by sovereign schemes, he said, adding there is a need to move towards more linear and balanced financial savings across the economy that will make the price of the money more attractive for users which effectively can give a boost to consumption.

On headwinds faced by the Indian economy, Kirloskar mentioned slow down in consumption especially in rural areas and moderation in industrial growth, rising oil prices, global protectionism and trade tension among others.

With regard to fiscal deficit, Kotak said it is an important number and there is a need to ensure a reasonable control on it.

"We will have to work towards stimulus either at fiscal or at monetary or a combination for kick-starting economic growth...We should control it. Quality of deficit is more important than quantity," he added.

Elaborating on improving employment in the country, he suggested a triple-pronged approach for job creation, relating to employment intensive sectors, skilling, and labour reforms for enterprise creation.

He placed a strong emphasis on accelerating growth in job-creating sectors such as construction, hospitality, logistics, healthcare, and the financial sector, among others. According to CII, construction and healthcare alone can create 20 million jobs in the next five years.

Talking about India's external trade, he said India should target merchandise exports of USD 400 billion for 2019-20 from USD 331 billion now.

"We need to find alternative schemes compatible with WTO to support exporters. Trade facilitation must ensure seamless connectivity to external markets. Trade financing too needs immediate attention of the government as only 1 per cent of total commercial banks' lending goes towards trade financing," he added.

On free trade agreements (FTAs), Kirloskar noted that a better strategy should be in place to leverage their benefits as these have "not resulted" in significant export outcomes.

He suggested fast-tracking FTA negotiations with the European Union which are pending since 2013.

On the proposed mega trade deal among 16 countries RCEP (Regional Comprehensive Economic Partnership) agreement, he said, India should negotiate equal market access with all the member nations including China.