Taking charge of Telecom ministry, Prasad said that amongst his priorities will be revival of state-owned MTNL and BSNL. 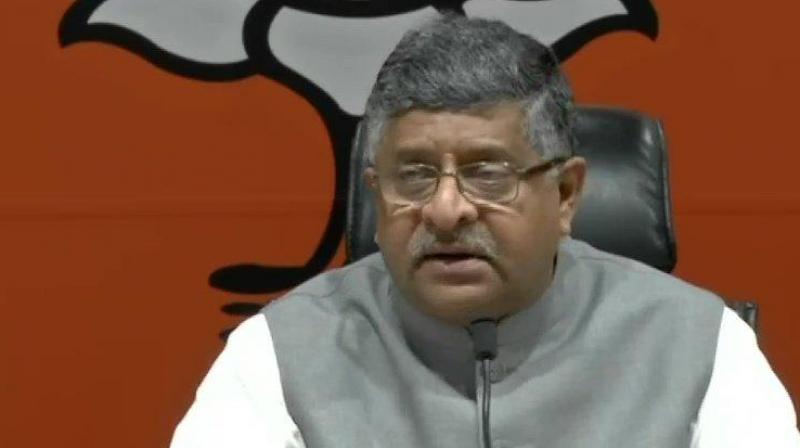 Other issues that will be prioritised by Ravi Shankar Prasad include 5G trials in 100 days, fast tracking of five lakh wifi hotspots, and promoting telecom manufacturing. (Photo: File | ANI)

New Delhi: India will hold a mega spectrum auction for 5G and other radiowaves in the current calendar year, and intends to start 5G trials in the next 100 days, the newly appointed Telecom Minister Ravi Shankar Prasad said on Monday.

Setting an action-packed agenda for the ministry soon after taking charge, Prasad said he would prioritise the revival of crisis-ridden telecom PSUs Bharat Sanchar Nigam Ltd (BSNL) and Mahanagar Telephone Nigam Ltd (MTNL) but added that the two companies will have to reciprocate and do their bit by adopting a professional attitude.

On the contentious issue of whether Chinese telecom gear maker Huawei will be allowed to participate in the upcoming 5G trials, the minister told reporters that the "complex issue" will be looked at seriously including security aspects.

The minister also cleared the air over timing of spectrum auctions in the country, saying, "I am of the belief that in the current calendar year, we will auction spectrum. We have adequate spectrum available."

The Telecom Regulatory Authority of India (Trai) has recommended auction of about 8,644 MHz of telecom frequencies, including those for 5G services, at an estimated total base price of Rs 4.9 lakh crore, but the financially stressed industry has contended that prices are unaffordable.

"Trai has given its recommendation on spectrum. We have a system of standing committee, finance committee, they are examining it. Once they come with solution...whether there is a need for more consultation with Trai, we will have to look into it. Then, we have to go to the Cabinet and appoint auctioneer," the minister said.

Other major issues on the minister's immediate agenda include starting 5G trials in 100 days and creating a Broadband Readiness Index, which reflects the realities of the Indian market, besides fast-tracking of five lakh WiFi hotspots, and promoting telecom manufacturing in India. The index will be based on parameters like infrastructure, approval processes and utilisation of high-speed Internet.

"As far as 5G network is concerned, we will start trials in 100 days. We propose to earmark a portion of spectrum also for 5G purposes. It shall be our endeavour that 5G technology is also used for deprived sections, social causes, education and health, and for bringing technology to rural people," Prasad said.

5G will play a major role in digital inclusion, he said adding that the government will strive towards this goal. Another area would be channelising the start-up movement in India for proliferation of 5G, he said.

Prasad acknowledged the role of state-owned corporations in maintaining a "sober equilibrium" in the market, but at the same time sent out a strong message to the two telecom PSUs - MTNL and BSNL, which are cash-strapped and have faced issues in payment of salaries in recent times. The minister emphasised that the two companies will have to "become professional". "Let my message clearly go to these two PSUs...It is in national interest that they remain healthy, we are working on that...But, they also need to become professional. While I will work towards their revival, they will have to respond with professional attitude," he said.

On the question of whether Chinese company Huawei will be allowed to participate in 5G trials, the minister said, "We will take a firm view on it. There are also security issues...it is not only a matter of technology, as regard their participtation in 5G is concerned...Participtation of 5G is not conditional upon the trial being started. Whether a particular company is allowed to participate or not, is a complex question including security issues."

Last month, the Trump administration had placed Huawei and its affiliates on blacklist, a move that essentially banned the Chinese telecom equipment company from purchasing parts and components from American firms without the US government approval. The US had subsequently relaxed some of the restrictions to reduce disruption for its customers.