'No High On The Way'! Amul's fantastic ad on SC's highways liquor ban appeals for a healthy India. 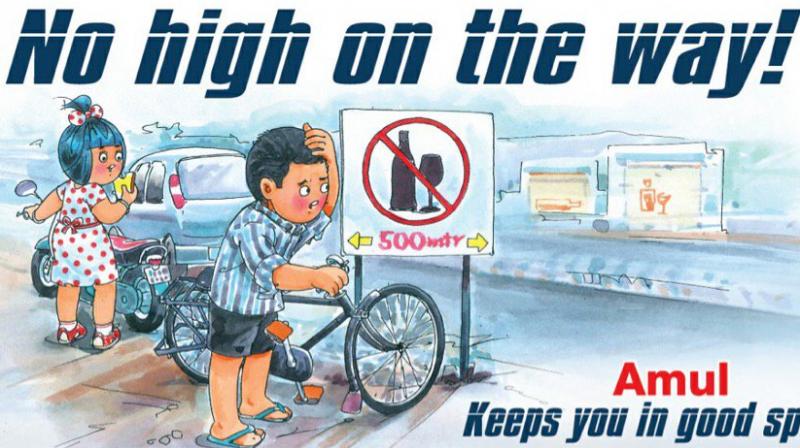 Mumbai: Gujarat Co-operative Milk Marketing Federation popularly known as Amul has a unique way to promote its products through brilliant advertisements. This time the leader in India's dairy sector has come up with an advertisement on the Supreme Courts' ban on liquor shops on highways.

Amul's managing director R S Sodhi in a tweet invited all these 16,000 pubs and bars along the highways to join hands for a healthy India. "We invite all these 16,000 liquor shops/bars to open Amul milk bar for gainful employment and healthy nation building," Sodhi tweeted.

In another tweet, the company put a very interesting advertisement in which company's famous one male and one female kid characters are juxtaposed against a signboard reading the liquor ban.

The apex court has banned sale of liquor along national and state highways in a radius of 500 meter. The ban it has been estimated that will deprive states of Rs 1 lakh crore in revenues from excise levies.

The recent ruling form the Supreme Court would affect over a million jobs and a loss of revenues running in thousands of crore of rupees for states, NDTV reported.