Amid COVID-19, investors bet on Jio and its giant-killer playbook 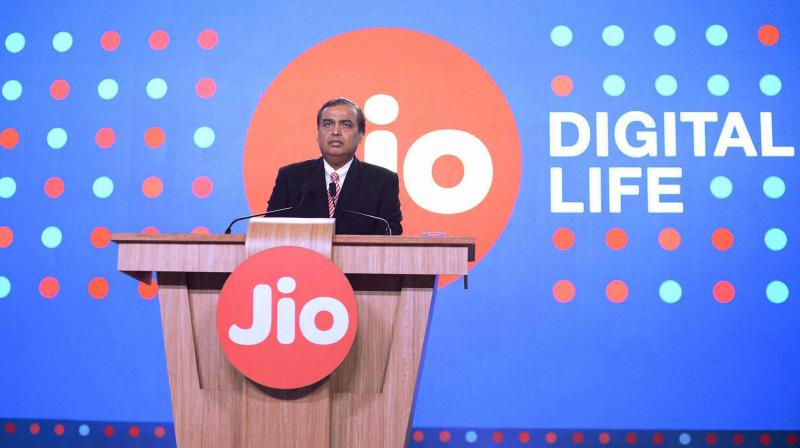 Mukesh Ambani’s Jio telecom carrier is emerging as a winner from changes in the way Indian consumers plug into a digital economy. (PTI Photo)

MUMBAI: From its Silicon Valley-like campus near Mumbai, Indian billionaire Mukesh Ambani’s Jio telecom carrier is emerging as a winner from changes in the way Indian consumers plug into a digital economy made more urgent by the coronavirus pandemic.

For Indian shoppers who prefer to order online, it is launching a grocery ordering service with Facebook Inc’s popular WhatsApp messaging. For Bollywood fans who would prefer to avoid a crowded theater, it is readying same-day-release on the Jio platform.

Those plans had been in the making for months, but the pandemic has given them a shot in the arm. India’s 10-week lockdown has also led to a surge in demand for data, boosting Jio’s phone and broadband offerings.

And, over the past six weeks, the digital business of Ambani’s Reliance Industries Ltd, known as Jio Platforms, raised a striking $10 billion from global investors.

They also put Jio on track toward a goal Ambani described last year: an eventual listing that would mark a milestone for his effort to unite the digital offerings of his sprawling conglomerate, from set-top boxes to e-commerce and home automation.

Reliance declined to make Ambani, Asia’s richest man, available for interview or respond to a detailed list of questions.

But interviews with a dozen people familiar with the company’s development efforts show how Reliance has pushed aggressive pricing for a one-stop digital commerce platform that incorporates features modeled on the American tech heavyweights it sees as rivals.

When Jio set out to launch a set-top box, it tasked a team with analysing – and in some cases replicating - some 100 features of an Apple TV set-top box last year, according to a person close to the project and internal Jio documents seen by Reuters.

“Presentation and listing of menu items should be similar to Apple TV,” one of the documents says, assigning the task a “Priority 1” rating.

One document compares the products’ features, like average weight. Another includes instructions like “Matching the background theme of Launcher (home screen) to that of Apple TV.”

Jio’s set-top box comes included in its broadband plans, with the cheapest annual deal costing around $110, whereas Apple TV 4K is selling for around $210 to $230 on Indian e-commerce sites.

Apple Inc did not respond to requests for comment.

In other areas, Ambani has shown a willingness to bet big on emerging technology. In India, Jio was an early adopter of voice-over-LTE, which is more efficient than traditional networks. The company expects that to give it an edge in rolling out 5G services.

In partnership with Facebook’s WhatsApp, Reliance has launched a new service that allows consumers to order from their local grocery stores at a time when many Indian consumers, like shoppers elsewhere, are trying to minimize trips to stores. The service was rolled out in April in three areas of Greater Mumbai.

By providing Indian consumers access to everything from groceries and clothes to banking and home automation via an integrated system running through Jio, Ambani hopes Reliance can become what he calls an “everything company.”

To help back its retail push, Reliance in March asked an Indian logistics provider for some 5 million square feet of warehousing space, according to a person briefed on the plans.

That comes after a 2019 request for service, reviewed by Reuters, that said the company was seeking 1.1 million square feet of warehousing space that would be “expandable in future.”

Reliance has not made public details of its warehousing space. By comparison, Amazon said in 2017 it had warehouses covering about 3 million square feet in India and has expanded since then. Amazon did not provide Reuters with an updated figure.

In addition to an eventual listing for Jio, Ambani has said he would look to list Reliance’s retail operations as well.

Jio’s other planned offerings include home viewings for films on the day of their theater release and networked security systems for cars.

But Jio’s broadband rollout, which is key for many of its planned digital offerings, has hit glitches, in part because the company had not initially set up sufficient customer support services, according to two employees and internal chat messages reviewed by Reuters. And unlike in telecoms, Reliance has not offered steep discounts to attract new customers.

Ambani’s ambition of creating a homegrown tech company took shape when Jio was launched in 2016 with aggressively priced data plans. Suddenly, migrant construction workers were video-chatting with their families, farmers were checking crop prices, and office workers were screening films during their commutes home on crammed trains.

Jio’s competitors, then numbering around a dozen, were forced to slash prices, quit, or merge as Reliance pumped in at least $30 billion in oil-related earnings to subsidize prices. “We have to bleed others to death - I remember that as a refrain,” said one former high-level Reliance executive, who asked not to be named.

Some rivals held out for longer than expected and Reliance ended up investing more than originally planned, according to a half-dozen sources who worked at Reliance or were briefed on the company’s ramp-up.

Last year, Jio became India’s No. 1 carrier by number of users. Meanwhile, rival Vodafone Idea Ltd, a venture between the Indian unit of Britain’s Vodafone Group Plc and billionaire Kumar Mangalam Birla’s Idea Cellular, has warned it may not survive having to pay about $4 billion in overdue levies and interest to the government.