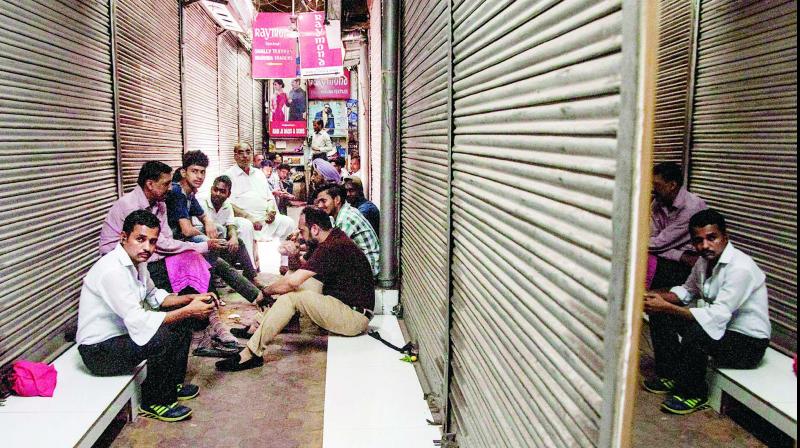 Cloth market traders sit outside their closed shops during a protest on the fourth day of the new GST regime at Chandni Chowk Market in New Delhi on Tuesday. (Photo: PTI)

New Delhi: The Centre on Tuesday allowed manufactures struck with unsold inventories manufactured before July 1, to change their MRP by pasting stickers.

Food and consumer affairs minister Ram Vilas Paswan asked manufacturers to pass on the benefits of reduced taxes under GST to consumers and warned that “shopkeepers not mentioning MRP revised because of GST will be liable for legal action.”

“After GST came into effect, the prices of some items have gone up while the prices of others have come down. The benefits of decreased prices, by reduction of tax after imposition of GST, should reach the consumers. We have granted relaxation till 30.9.17 to industry under Packaged Commodities Rules to write new MRP on items of reduced prices due to GST,” Mr Paswan wrote in a series of tweets.

He said that new MRP should be mentioned on the items where prices have increased due to GST so that the consumers can be aware of the impact of GST.

“The shopkeepers not mentioning MRP revised because of GST will be liable for legal action,” the minister added.

However, before increasing MRP of unsold inventory, companies will have to make atleast two advertisements in one or more newspapers indicating price change.

“The difference between retail sale price originally printed on package and the revised price shall not, in any case be higher than the extent of increase in the tax,” said a circular by the consumer affairs ministry.

Also the originally printed MRP shall continued to be displayed and the revised price will not overwrite on it.