IKEA had initially planned to open 25 stores across the nation by 2025. 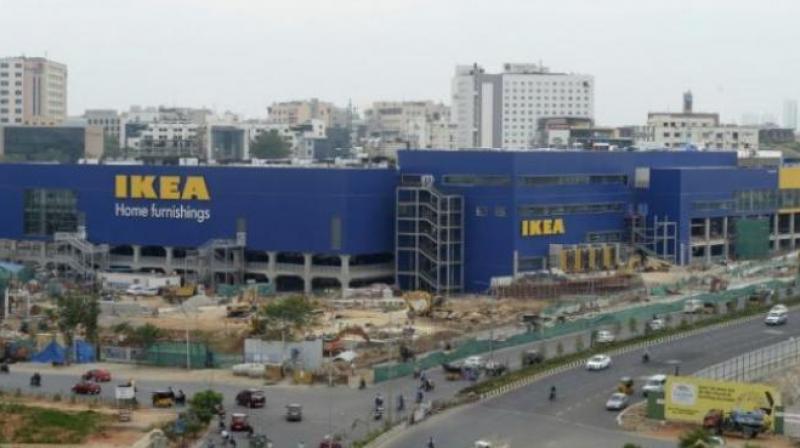 IKEA will do things differently in India after it opens its first store in the nation on Thursday, as it deals with higher taxes on imported goods and looks to woo cost-conscious shoppers unaccustomed to the company’s DIY furniture assembly style. (Photo: AFP)

Hyderabad: IKEA will do things differently in India after it opens its first store in the nation on Thursday, as it deals with higher taxes on imported goods and looks to woo cost-conscious shoppers unaccustomed to the company’s DIY furniture assembly style.

The Swedish furniture retailer is pushing into new countries in South America and Asia as growth slows in its traditional strongholds, including Europe. It is betting on India with its growing middle class, likely aiming to avoid a repeat of the high pricing that initially hit sales in China and Australia.

The company, which has flagged import duties in India as a big challenge as it tries to keep prices low, has to source at least 30 per cent of its raw materials locally within five years of operations in the country as per Indian regulation. IKEA already sources about a fifth of its global supplies from India.

Nevertheless, IKEA still needed to tweak its playbook. The 4,00,000 square feet (37,160 square metre) store in the southern Indian city of Hyderabad will offer 1,000 products including cutlery, stuffed toys, hangers and container boxes priced under 200 Indian rupees (USD 2.91) - cheaper than in most countries.

“IKEA seems to have managed to understand the Indian consumer and price its products accordingly,” said Sowmya Adiraju, an analyst at research firm Euromonitor International. But she added that the target audience for many IKEA products right now, especially for big-ticket items, seemed to be the wealthier end of middle class.

“It would be interesting to see how IKEA does justice to its vision of ‘furniture for all’,” she said. To satisfy the Indian penchant for ready-made furniture, IKEA has set up a 150 member task force to help customers assemble furniture and is also partnering with UrbanClap, an app that connects people with a variety of service providers, including carpenters.

UrbanClap charges customers about 250 rupees (USD 3.64) for a 30-minute carpentry job. In comparison, TaskRabbit, the services platform acquired by IKEA in 2017, charges US shoppers a minimum of USD 36 for any installation job. IKEA has so far only said it will charge more than UrbanClap if its in-house assemblers do the job.

IKEA’s debut in India has been a long time coming. The company hit snags a few years ago after the government rejected its request to relax rules on buying goods locally.

Meanwhile, competition for IKEA in the country has increased as online furniture startups such as Pepperfry and UrbanLadder have become popular in large cities. The overall furniture market, though, remains largely dominated by unorganized retail and local vendors.

IKEA had initially planned to open 25 stores across the nation by 2025. In June, the company said it was likely to open more stores, possibly some smaller stores in cities to complement their typically larger showrooms in suburbs.

The company has bought land in Hyderabad, Bangalore, Mumbai and Gurugram, and is also looking to expand into Surat, Ahmedabad, Kolkata, Chennai and Pune.

Retail sales at IKEA Group’s company-owned stores increased by 4 per cent last year. In comparison, sales in India’s homeware and home furnishing stores grew about 9 per cent, according to Euromonitor.

Tags: ikea, furniture, do it yourself, urbanclap