The bank's shares were down as much as 5.2 per cent intra-day in Mumbai on Friday 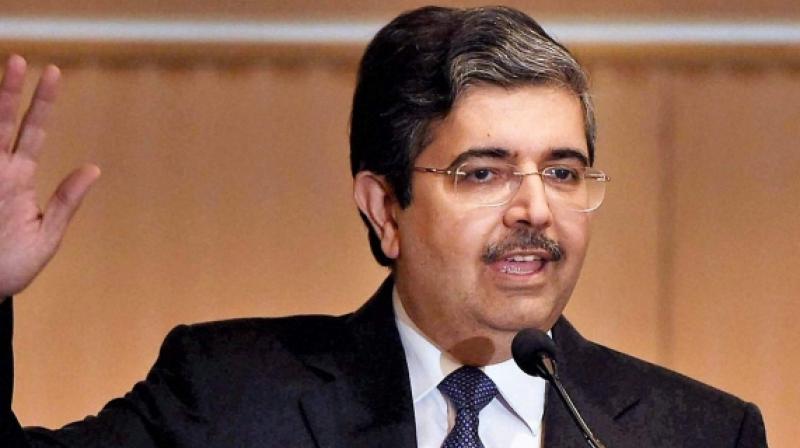 Billionaire Uday Kotak's role as head of the bank he founded may be curtailed by new proposals to limit the tenure of chief executive officers of banks.

The Reserve Bank of India has proposed a 10-year limit on bank founders remaining in the roles of CEO or full-time director, according to a discussion paper on corporate governance released on Thursday. The restricted tenure will ensure "separation of ownership from management but also reinforce a culture of professional management," the paper said.

Once implemented, the rules would pose one of the biggest issues for Kotak, who has headed Kotak Mahindra Bank since he founded the bank in 2003.

"Kotak Bank might be affected more as Kotak has completed 17 years as CEO," analysts at Jefferies wrote in a note. The proposals could mean Kotak will have to step down in 2022 or 2023, depending on when the rules are implemented, the analysts said.

Earlier this year, Kotak settled an unprecedented court battle with the RBI over the level of his holding in Kotak Mahindra Bank. Following the agreement, he has reduced his stake in the lender to 26 per cent from nearly 30 per cent previously.

A spokesperson for Kotak Mahindra Bank declined to comment. The bank's shares were down as much as 5.2 per cent intra-day in Mumbai on Friday. The shares later pared the losses to end 1.5 per cent lower.

The proposals follow the RBI's orchestration of a massive bailout of Yes Bank earlier this year, after the private-sector lender faced a run on its deposits. The bank's founder and former CEO Rana Kapoor has been arrested on charges of money laundering.

The central bank said it would allow banks up to the end of their founder CEO's current tenure to find a new head, or two years from the time the new guidelines are implemented, whichever is later. Kotak's current period as CEO is due to end in December.

The rules will become effective six months after they are published on the central bank's website or from April 1 2021, whichever is later, the RBI said. The central bank is seeking comments on its proposals by July 15.

Other CEOs nearing the end of their tenures who might be affected include the heads of Bandhan Bank, RBL Bank, Federal Bank and AU Small Finance Bank. The heads of other major private sector lenders ICICI Bank, Axis Bank and IndusInd Bank are more recent appointments.

The RBI also proposed to limit the tenure of a bank CEO who isn't a founder to 15 years. It also said it would retain the current requirement for bank CEOs to retire at the age of 70.

Aditya Puri has announced that he will step down as CEO of HDFC Bank when he turns 70 in October. The bank has sent a shortlist of three names to the RBI to succeed him.