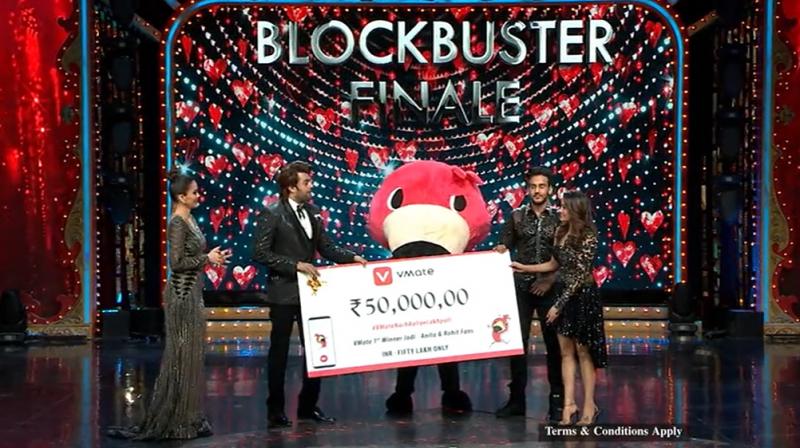 The in-app campaign witnessed participation from over 2 million VMate users across India, creating more than 1 million unique short-videos to support their favourite Jodis.

New Delhi: VMate, the trending short video platform recently concluded its successful association with India’s biggest dance reality show “Nach Baliye 9”. The association saw tremendous response from VMate users supporting their favourite Dance Jodis, rewarding them with gifts worth Rs 1 Cr and in turn winning prizes for themselves. The in-app campaign witnessed participation from over 2 million VMate users across India, creating more than 1 million unique short-videos to support their favourite Jodis. The entertaining videos showcased high enthusiasm from the users who made videos ranging from mimicking the dance moves of their favourite couple to expressing their best wishes.

The month-long campaign observed multiple contests from VMate, channelizing the enthusiasm of “Nach Baliye” fans, making it one of the most engaging social media campaigns. VMate’s “Nach Baliye Lakhpati Campaign” provided opportunity to its users to show their love and support for their favourite Celeb Jodis through free VMate “Nach Baliye” gifts. The one-of-a-kind campaign made participants win cash prizes worth INR 1 crore in lieu of their support.

VMate ranked the celebrity Jodis basis the number of gifts received from users & the Jodi with maximum rewards topped the list. Fans of the top 3 Jodis on the leader board were the winners. Celeb Jodis further made their fans win prizes back. The highest cash prize won by a talented video creator Shubham (VMate ID: 67402850) is of Rs. 1.3 Lakh. Shubham is an acrobat, professional dancer and dance instructor from Uttar Pradesh. He runs a dance academy in his locality and as an avid VMate user, uploads various videos to showcase his talent in dance and acrobatics. On winning the reward Shubham expressed, "I am extremely happy to win and I will invest this money in further development of my dance academy. I have been earning good money on VMate basis the rewards that I receive from viewers. VMate is a significant contributor to my livelihood and fame; and my parents are also very proud of my achievements on the platform. This win will further help spread a word about my VMate channel/account among dance enthusiasts. Now, others around me are also inspired to join the platform as well."

Nach Baliye Season 9 culminated on 3rd November, witnessed Prince Narula and Yuvika Chaudhary's Jodi winning the title. Besides winning cash prizes, more than 50 VMate users won OnePlus 7 T smartphones, and 4 lucky fans earned themselves the golden chance to meet their favourite Celebrity Jodis. Ablu Rajesh Kumar, one of the 4 winners, also leveraged the opportunity to dance with celebrities Anita, Rohit and Prince in front of the national audience. Rajesh is a famous influencer on VMate, and earns his livelihood by showcasing astounding dance moves. With over 94,000 followers, Rajesh has successfully managed to turn around his life, and despite being physically disabled, has become one of the most loved dancers on social media.

According to Nisha Pokhriyal, Associate Director- VMate, said, "We are overwhelmed with the response from our users and the success of our association. It was the first-of-its-kind campaign conceived by our platform, and in the sector as well. VMate successfully amplified the special bond between India's favourite Dance Show “Nach Baliye” and its fans, and created a new benchmark for engagement. Going forward, VMate strives to create more engaging associations and campaigns for its users.

VMate has been embraced by millions who showcase their talent via 15- sec videos to earn both reward and money through the platform. VMate’s association with Nach Baliye Season-9 amplified the thrill and presented an opportunity to earn and win additional rewards and money to VMate users.