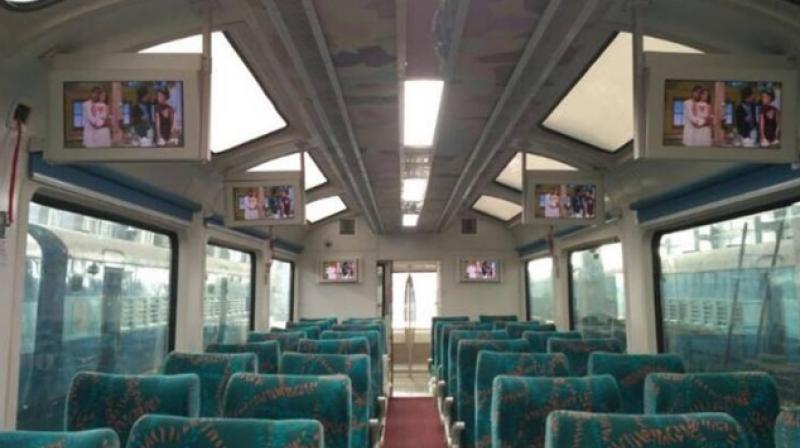 Visakhapatnam: Aiming to provide a delightful travelling experience to the picturesque Araku valley in Visakhapatnam, the Railways on Sunday introduced a see-through Vistadome coach on its Visakhapatnam-Kirandul passenger train.

Railway Minister Suresh Prabhu flagged-off the train through a video link from Bhubaneswar.

The specially-designed Vistadome air-conditioned coach, claimed to be a first-of-its-kind on Indian Railways, has large glass windows and an observation lounge that offer passengers a panoramic view of the sites along the 128-km rail route from Visakhapatnam to Araku valley hill station.

A unique feature of this Rs 3.38 crore 40-seat coach is the double-wide reclining passenger seats that could be rotated 360 degrees for a better sightseeing experience.

The coach also has a glass-domed ceiling, automatic sliding doors and a multi-tier luggage rack, a railway release said.

The tourists can now sit relaxed in their seats and get a clear view of the breath-taking Anantagiri ghat section, Lambasingi, Borra caves and the tunnels along the route, from the Vistadome coach.

Only one coach has been attached to the train now on a trial basis, while one more will soon be added.

After the launch, Prabhu said the Vistadome coach was being introduced for the first time in the country to promote tourism. A similar coach would later be introduced on a route in northeast as well, he said.