APIMA organized a meet to discuss measures that needs to be taken by the government for revival of the Plastics Industry. 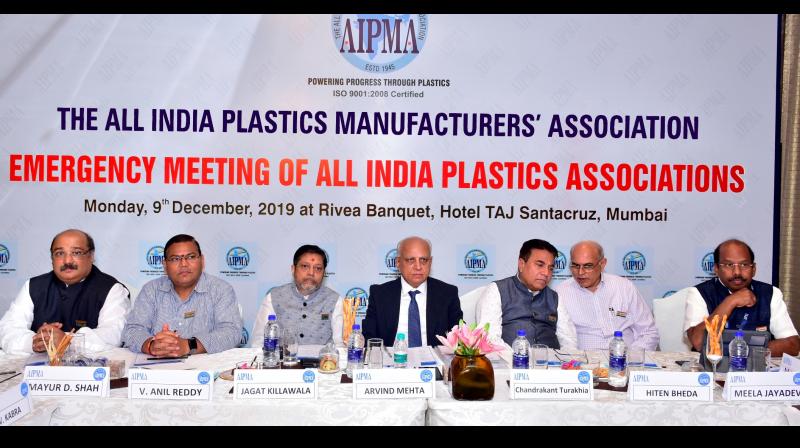 Mumbai: The All India Plastics Manufacturers Association (AIPMA), the 74-year-old and the largest Industry Association in India representing 22,000 industrial units has called for immediate steps by the Government of India to revive the industry and put it back on the growth trajectory. The industry body has demanded restructuring of Custom Duties, Anti Dumping Duty on import of cheap finished products, review of Foreign Trade Agreements, enforcement of mandatory BIS standards and technology up gradation fund for the industry among others.

Mr. Jagat Killawala, President of The All India Plastics Manufacturers Association said that the Plastic Industry is one of the major contributors to the Indian economy and is expected to play a key role in India becoming US $5 Trillion Economy.  He also expected that the Central Government should engage strongly with the industry to ideate and implement impactful policy solutions for higher growth.

“The industry is currently witnessing depression in the market which has led the industry to halt their expansion and investment plans,” said Mr. Arvind Mehta, Chairman, Governing Council, AIPMA. He further highlighted the need for Government to come out with clear plans and strategy on various fronts in order to spur the much needed growth.

Elaborating on the demands, Mr Killawala said that taking into account the short term as well as long term growth of plastics processing industry, the industry associations unanimously demanded government to not come under pressure from any quarter to increase custom duty on key raw material. “The industry demanded that custom duty of PVC should be brought down from 10% to 7.5% as nearly 50% of demand in India is being met through imports due to lack of domestic capacity.  Any increase in custom duty will affect the agriculture sector due to high use of PVC pipes and fittings. Custom duty of Polypropylene and Polyethylene should be retained at 7.5%. If increased, it would have adverse effect on automotive, healthcare segments and would lead to cost increases in the value chain. Increasing Tariff for PET will affect the processing and consumer segment and thus tariff for PET should be retained to 5% to nurture consumer products consumption. It was further demanded that the custom duty on SAN and ABS should be brought to 5% to nurture associated industries growth,” he said.

The plastics processing industry comprises of over 50,000 Micro and small units employing around 50 lakhs people. It is a major contributor to the Indian economy manufacturing goods worth Rs. 3.75 Lakhs crore annually. However, it is under severe strain due to cheap imports from China and other south Asian countries. Industry demanded that the Delta of minimum 10% should be maintained between custom duty of raw material and plastics finished goods.

The domestic industry is suffering due to dumping by China and other countries at very cheap cost. Industry demanded that to prevent under invoicing by foreign players, floor pricing should be established on finished goods. It also demanded that The Directorate General of Trade Remedies should recommended anti-dumping duty on plastics finished goods originating in or imported from 3 major dumpers including China for a period of at least five years.

Existing FTAs with various countries have failed. It has resulted in massive import of finished goods from FTA countries into India at zero or concessional duty badly affecting competitiveness of Indian plastics processing industry. However, exports from India to these countries have marginally grown leading to huge trade imbalance. Therefore, Industry demanded that all existing FTA’s be reviewed and Polymers and Products made of Polymers shall be excluded from all FTAs.

“Government of India is planning to enforce mandatory BIS standards on raw material. Industry felt that this move would put small enterprises to disadvantage and allowing imports of semi-finished and finished products, which are made from very raw materials which are being denied entry by imposing non-tariff barrier to trade (NTBT), would not be in the best interest of the nation. Industry demanded that both BIS and international standards should be considered at par. This would avoid unnecessary compliance burden on the raw material suppliers and at the same time ensure import of safe and quality material,” said Mr Mehta.

On the other hand, Small units would face major disruption if BIS standards are made mandatory on plastic finished goods due to compliance burden, high cost of certifications and renewal, non-availability of adequate facilities for testing and harassment by authorities.

The plastics industry has also demanded that the long pending proposal for Technology Up gradation Fund on the lines of Textile industry should be implemented immediately to spur the export growth.