At its peak, Jet operated 123 planes and over 600 daily flights. It was flying just seven planes on Tuesday. 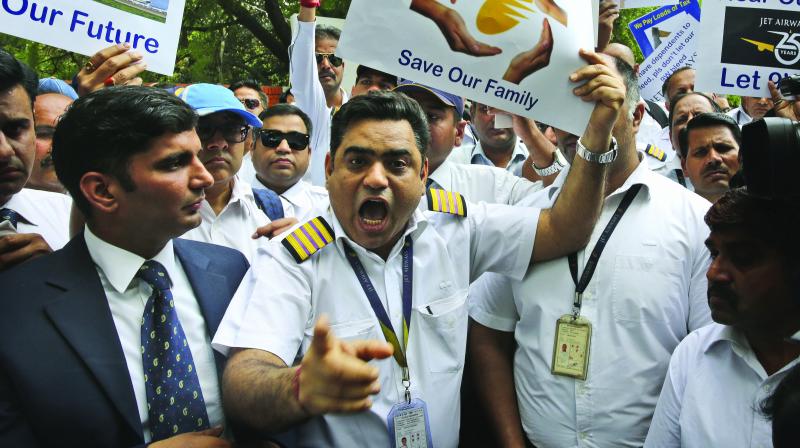 Jet Airways’ employees gather to appeal to the government to save their company, in New Delhi on Thursday. (Photo: AP)

Mumbai: A day after Jet Airways suspended all its flights, lenders to the grounded airline on Thursday said that the bidding process for the airline will be able to determine “fair value of the enterprise in a transparent manner”. They said that the binding bids from potential investors are the best way forward for the survival of the airline.

“The lenders after due deliberations decided that the best way forward for the survival of Jet Airways is to get the binding bids from potential investors who have expressed EOI and have been issued bid documents on April 16. Lenders are reasonably hopeful that the bid process is likely to be successful in determining fair value of the enterprise in a transparent manner,” the statement from Jet Airways lenders said.

A consortium of 26 lenders led by the SBI, with 51 per cent stake in the cash strapped airline, had invited bids from potential suitors and had selected Etihad Airways, National Investment and Infrastructure Fund, TPG Capital and Indigo Partners as qualified bidders. SBI Capital Markets has the mandate for Jet Airways' sale. The bids received for Jet Airways will be opened on May 10.

On Monday, the airline’s lenders, led by State Bank of India (SBI) declined to extend emergency funds of Rs 400 crore to keep Jet afloat, forcing it to suspend all its flights.

Jet had been, over the last few months, on a decline as competition from budget airlines hurt its profitability and led to a debt pile. According to Bloomberg report, the airline made losses in nine of the past 11 years, has about `7,300 crore of net debt and approximately `355 crore of cash at the end of last year.

At its peak, Jet operated 123 planes and over 600 daily flights. It was flying just seven planes on Tuesday.

Passengers who had booked on Jet for travel on future dates will get a refund.

Meanwhile, the Bombay High Court on Thursday refused to intervene in the Jet Airways crisis, saying it cannot direct the government and the Reserve Bank of India to rescue a “sick company”.

A bench of Chief Justice Pradeep Nandrajog and Justice N. M. Jamdar dismissed a writ petition seeking the government and the central bank be asked to direct the consortium of banks help the cash-starved airline, which was grounded from Wednesday indefinitely.

The writ petition sought among other things a direction to the government to ensure the airline resumes operations.