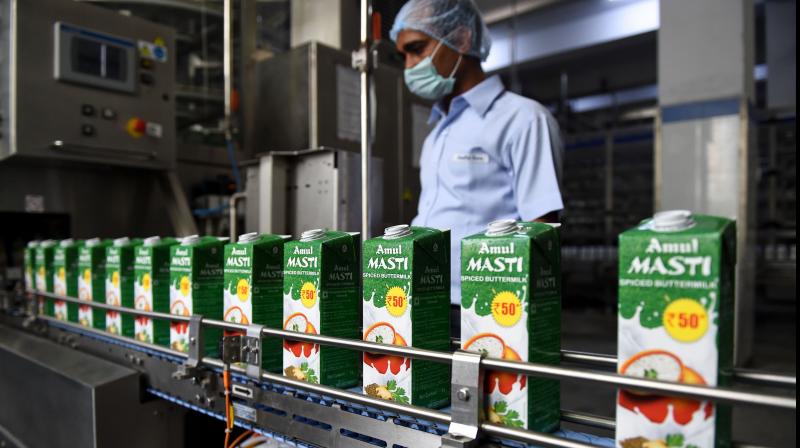 The consolidated turnover of the Amul brand of products exceeded Rs 52,000 crore during 2019-20. (PTI Photo)

Ahmedabad: The consolidated turnover of the Amul brand of products exceeded Rs 52,000 crore during 2019-20, the Gujarat Cooperative Milk Marketing Federation (GCMMF), which sells and produces Amul products, said on Saturday.

The federation said it aims to achieve a group business turnover of Rs 1 lakh crore by 2024-25.

"The group turnover of GCMMF and its constituent member unions, representing consolidated turnover of all products sold under Amul brand is exceeding Rs 52,000 crore or USD 7 billion. GCMMF aims to achieve a group business turnover of Rs 1 lakh crore by 2024-25," it said in a statement after the 42nd AGM held at Anand.

The GCMMF said it registered a sales turnover of Rs 38,542 crore in 2019-20, which is 17 per cent higher than the previous financial year.

A rapid expansion has helped Amul record a turnover almost five times higher than Rs 8,005 crore in 2009-10, it said.

India continues to be the world's largest producer of milk, and is likely to retain its prime position with an annual growth rate of 5.5 per cent during the last three to four years as against global growth of 2 per cent, GCMMF Vice Chairman Jethabhai Bharwad said.

"These extra five crore litres of milk collected and processed by the organised dairy industry will provide livelihood to approximately 30 lakh people in rural India.

This is really the need of the hour, when hundreds of thousands of people have migrated back to their villages from urban centres," he was quoted in the statement as saying.

The Board members also expressed their "heartfelt gratitude" to the Government of India for taking a firm stand during Regional Comprehensive Economic Partnership (RCEP) negotiations that will benefit 10 crore dairy farmers of the country, it said.