Lottery traders hold protest in Mumbai against 28 per cent GST

Lottery business has reduced to 25 per cent of what it was before the GST came into force on July 1. 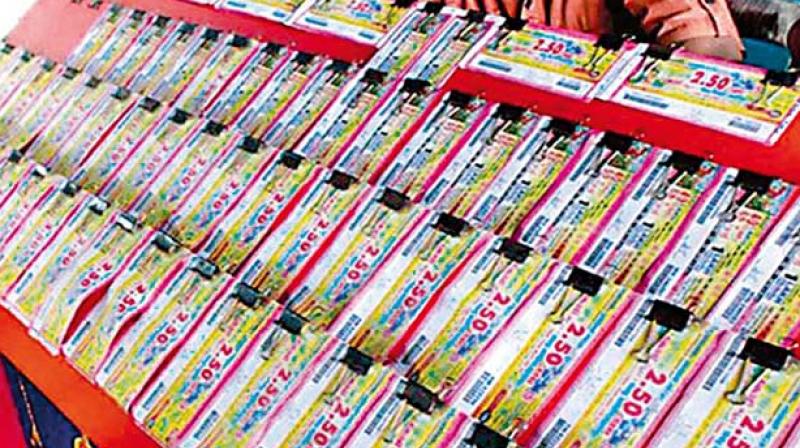 The agitation was held at Azad Maidan where almost one lakh lottery traders gathered under the banner of Lottery Bachao Mahakruti Samiti.

Mumbai: Lottery traders from across Maharashtra on Monday staged a day-long agitation here to protest 28 per cent GST on online lotteries. They said online lottery business will be adversely affected by the high tax rate and demanded that the levy on tickets be fixed at 12 per cent.

The agitation was held at Azad Maidan where almost one lakh lottery traders gathered under the banner of "Lottery Bachao Mahakruti Samiti" and voiced their concerns over the 28 per cent GST on their business.

Convener of the Samiti Snehal Shah said, "Online lottery business caters to a lot of poor, differently-abled, widows and those not very educated."

"The 28 per cent GST imposed on face value of lottery has adversely impacted the online lottery business. The business has reduced to 25 per cent of what it was before the GST came into force on July 1."

"Many lottery sellers have downed shutters and many more are on the verge of winding up their business. If situation doesn't improve, then it will lead to closure of trade as it would be very difficult for operators or distributors to survive," Shah said. Addressing the gathering, Shah said,

"To sustain online lottery business, the government should take a separate decision and levy GST on the margin money (face value-prize amount difference) of online lottery tickets sale as prize money is already taxed under the Income Tax Act 1961.

"We request the GST Council to take a separate decision to levy GST on supply of lottery tickets at a flat rate of 12 per cent," Shah said.

In June, the GST Council announced a dual tax rate for lottery tickets under the new indirect tax regime, which came into effect on July 1. Lottery traders attached with the ruling BJP said the government would take this issue seriously.

Anuj Bajpayee, a local BJP leader and a lottery trader, said, "Imposition of 28 per cent GST is a no-win situation for every stakeholder, be it lottery seller, buyer or government that collects revenue. Mumbai BJP president Ashish Shelar met the agitators at Azad Maidan and said their demands will be looked into. Speaking to PTI, Shelar said, "We are taking their demands seriously and I will arrange their meetings with government functionaries as well as the finance minister."

"Whatever is feasible will be done to protect their means of livelihood," said Shelar, who is also an MLA.