Merger of the state-run banks should open up more capital generation avenues, both internally and from market. 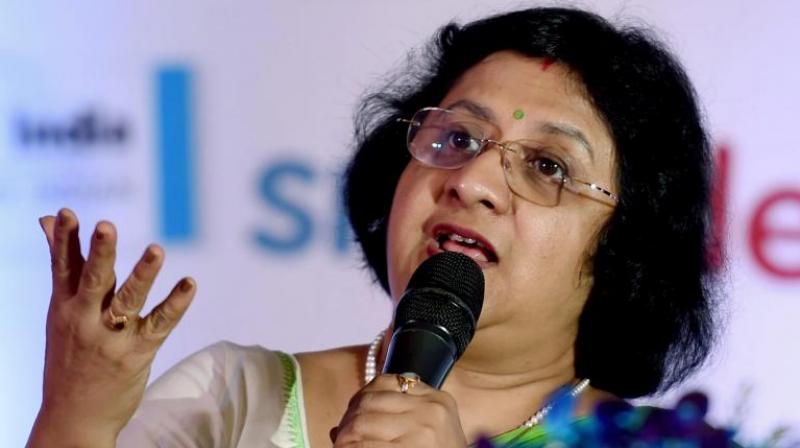 Mumbai: State Bank chairman Arundhati Bhattacharya on Wednesday called for more consolidation among the public sector banks, saying this could reduce their dependence on government for capital.

The statement comes after SBI merged all its five subsidiaries and Bharatiya Mahila Bank, which resulted in a massive spike in its provisions and bad loans ratio that touched double digits in the first consolidated results announced earlier this month, though this led to the creation of the 45th largest bank in the world.

The merger of the state-run banks should open up more capital generation avenues, both internally and from market, for the merged entity, she said.

"From a government point of view, besides an increased stream of dividends, which forms a part of their non-tax revenue, mergers of state-run banks can also reduce dependence of the merged bank on government for the future capital infusion," Bhattacharya said while delivering the 14th Nani A Palkhivala memorial lecture here this evening.

Merger of public sector banks must increase the role of internal and market resources and thus reduce government's dependency, she explained. Stating that the banking sector is at critical juncture and is faced with challenges like capital constraints due to their government ownership, Bhattacharya said, "these issues call further consolidation".

From an institutional and investors point of view, the available market float of a merged bank's shares must appreciate, she said, adding these consideration has at least guided the merger decision of SBI.

Bhattacharya said after the merger, SBI has moved to a return on equity (RoE) based budgeting, along with risk based budgeting in managing its portfolio. She said that consolidation in the banking sector will lead to greater concentration of payment and settlement flows as there are fewer parties in the financial sector.

"Now, is this also a hindrance or is this going to be beneficial, but given the cyber security risks that we currently run, probably this could also be beneficial," Bhattacharya said.

However, she warned that operational risks could rise post-merger, as the size of operations enlarge and since the distance between management and operational personnel is greater, the administrative systems become more complex.

"There is a view that exercise of market power by larger merged banks can also alter the monetary transmission operating through bank lending or borrowers without direct access to financial sector," she said, adding, "so mergers may increase systemic risks and mergers guided only by pure capital adequacy considerations are ill-advised".