“Despite not having any permissions, if they try to sell the medicine or advertise, an offence will be registered against them,” he said 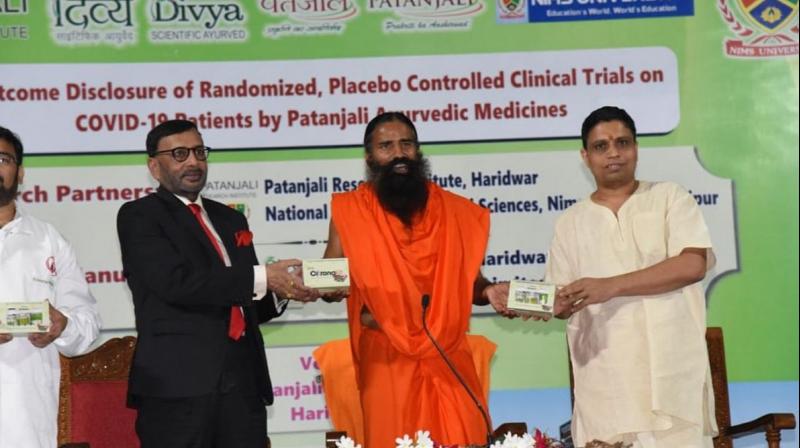 Maharashtra home minister Anil Deshmukh on Thursday said that legal action will be taken against Baba Ramdev’s company Patanjali, if it sells their anti-corona drug in the state. (PTI Photo)

Mumbai: Maharashtra home minister Anil Deshmukh on Thursday said that legal action will be taken against Baba Ramdev’s company Patanjali, if it sells their anti-corona drug in the state. Terming Coronil, the drug launched by Patanjali as anti-Coronavirus ayurvedic medicine, Mr Deshmukh said that the National Institute of Medical Sciences (NIMS) in Jaipur will find out whether proper clinical trials of Coronil were done or not.

The home minister said that Patanjali’s medicine needs a permission from Union AYUSH Ministry and Indian Council of Medical Science. “Despite not having any permissions, if they try to sell the medicine inMaharashtra or advertise that COVID-19 can be cured with it, an offence will be registered against them,” he said.

The minister also posted on his twitter handle, “TheNational Institute of Medical Sciences, Jaipur will find out whether clinicaltrials of @PypAyurved’s ‘Coronil’ were done at all. An abundant warning to@yogrishiramdev that Maharashtra won’t allow sale of spurious medicines.”

Meanwhile, the BJP came in the support of Baba Ramdev.BJP leader and legislator Ram Kadam said that how can Mr Deshmukh call the medicine spurious without any investigation.

Responding to the home minister on Twitter, the BJPlegislator posted a document claiming that it was the approval of the NIMS for the clinical trials of Coronil. “Maharashtra Home Minister Anil Deshmukh's tweet onPatanjali's Coronil medicine on Coronavirus calling it as spurious. He also said that clinical trial approval from NIMS will be awaited. I would like to inform the Respected Home Minister that clinical approval is there (sic),”Mr.Kadam tweeted.

Patanjali had on Tuesday launched Corona Special Kitclaiming that it was the first Ayurvedic cure for treating COVID-19. The company also claimed that the drug has shown 100 per cent favourable results during clinical trials on affected patients. However, later the Union ministry of AYUSH asked Patanjali to provide details about the medicine and to stop advertising the products.