This Apple-1 is one of only 60-70 remaining of the original 200 that were designed and built by Jobs and Wozniak. 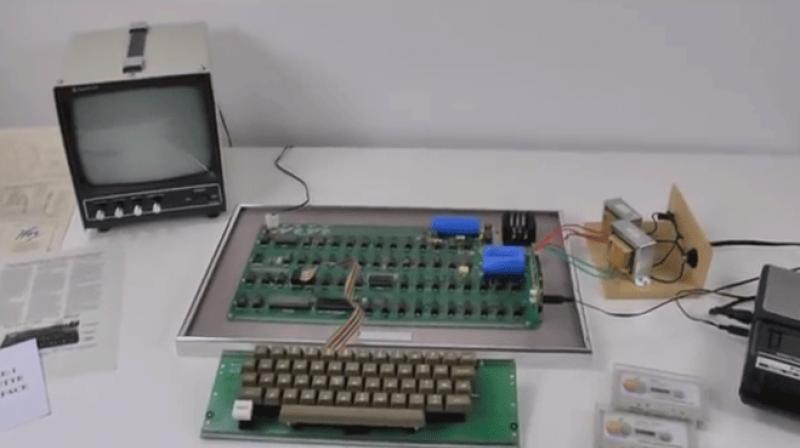 An extremely rare, fully functional Apple-1 computer -- one of the first PCs that did not require the users to assemble components -- was sold for USD 3,75,000 at an auction here. (Photo: Youtube)

Boston: An extremely rare, fully functional Apple-1 computer -- one of the first PCs that did not require the users to assemble components -- was sold for USD 3,75,000 at an auction here.

The Apple-1 was originally conceived by Steve Jobs and Steve Wozniak as a bare circuit board to be sold as a kit and completed by electronics hobbyists, their initial market being Palo Alto's Homebrew Computer Club.

Seeking a larger audience, Jobs approached Paul Terrell, owner of The Byte Shop in Mountain View, California, one of the first personal computer stores in the world, according to US-based RR Auction. Aiming to elevate the computer beyond the realm of the hobbyist, Terrell agreed to purchase 50 Apple-1 computers, but only if they were fully assembled.

The Apple-1 thus became one of the first 'personal' computers which did not require soldering by the end user. All together, over a span of about ten months, Jobs and Wozniak produced about 200 Apple-1 computers and sold 175 of them.

This Apple-1 is one of only 60-70 remaining of the original 200 that were designed and built by Jobs and Wozniak that originally sold for USD 666.66, the auction house said in a statement.

This computer was restored to its original, operational state in June 2018 by Apple-1 expert Corey Cohen.The most remarkable aspect of this Apple-1 computer is that it is documented to be fully operational. Unlike many of the known Apple-1 boards, this unit has not had any modifications to the physical board, and the prototype area is clean and unused.

"Steve Jobs and Steve Wozniak and the company that they created together made the ugly and unappealing world of technology elegant and beautiful -- bringing it mainstream, to the masses and infinitely making the world a better place to live," said Bobby Livingston, of RR Auction.

"This is the machine that launched Apple Computer, a company that would define an industry and was recently able to achieve a USD 1 trillion valuation milestone," Livingston said.