The central bank and barred from renewing, or granting any loans, or making investments. 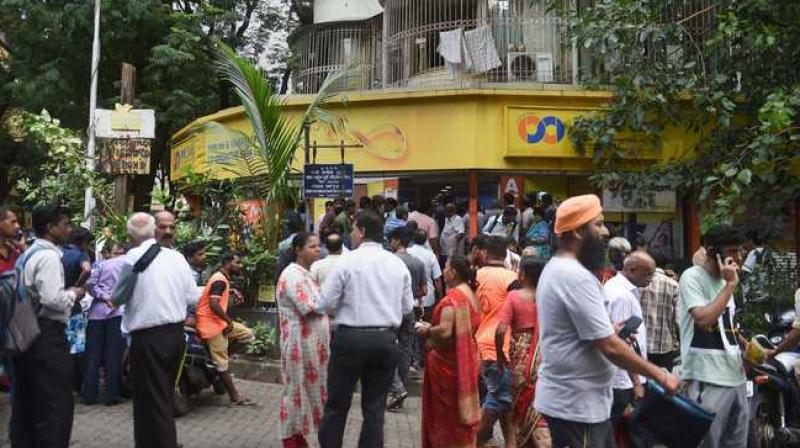 Thousands of depositors across various branches stood outside demanding answers on their life savings. (Photo: PTI)

Mumbai: The Reserve Bank of India’s (RBI) move to take charge of one of the country’s top five co-operative banks on Tuesday brought worried depositors out in protest and sparked renewed concerns about the health of India’s troubled banking sector.

Depositors of the Punjab and Maharashtra Co-operative (PMC) Bank were informed on Tuesday they can withdraw only a sum of 1,000 rupees from their bank account over the next six months, while the bank itself has been put under the direction of the central bank and barred from renewing, or granting any loans, or making investments without prior approval of the RBI.

The sudden move led to protests and long queues outside the bank’s branches. It has 137 branches that are spread across seven states in India.

“My money is gone now,” said Ashok Mahto who stood outside a bank branch in Santacruz, a suburb of Mumbai city, convinced that the 65,000 rupees that had taken him six months to accumulate had been lost forever.

Mahto, was not alone. Thousands of depositors across various branches stood outside demanding answers on their life savings.

In the capital New Delhi, Usha Pandey, another depositor, said she had kept her life savings of 2.6 million rupees in the bank. But with curbs on withdrawals, she felt helpless.

“We need money urgently for the medical surgery of my mother-in-law and we can’t withdraw our own money,” she said.

Over two dozen of these co-operative banks are now under RBI administration, but PMC Bank - with deposits of 116.17 billion rupees as of March 31 - is by far the largest to be hit by such RBI measures.

Depositors at co-operative banks are in a relatively higher risk zone as the supervision and administration of these entities falls under state governments and the central bank.

The central bank cannot take any action against the banks unilaterally but can suggest a plan to the state government which has the ultimate authority to decide if the bank should continue operations or be shut down.

PMC’s plight has also raised new fears about the broader Indian banking sector that has been rocked by a multi-billion dollar fraud at a state-run lender, the collapse of a major infrastructure lender, bad loan issues at state-run banks and a liquidity squeeze that has hit shadow lenders.

The public sector bank index, which surged as much as 10.4 per cent over two trading sessions following a government announcement of a big cut in corporate taxes last week, has since fallen as much as 7.8 per cent in on Tuesday and Wednesday.

Rumours of the RBI closing down nine public sector banks permanently also spooked markets and the public, forcing the central bank to refute the rumours on social media.

PMC Bank itself sought to calm depositors and Managing Director Joy Thomas, in a text message to customers on Tuesday, attempted to reassure them that the bank’s issues would be resolved within six months.

“We have ample assets to cover all our liabilities toward the depositors. All my loans are backed by adequate securities. It is just a question of time,” Thomas said in an interview with CNBC TV18 on Wednesday.

“Our staff has worked hard to win the confidence of clients over the years. After this incident, it’ll be very difficult to revive that confidence,” said Sonia Malik, a branch manager at a PMC Bank outlet in New Delhi, adding employees were worried about their jobs too.