Export orders are still contracting at the fastest pace in years, with a sub-index standing at 35.3 in May, well below the 50-point mark 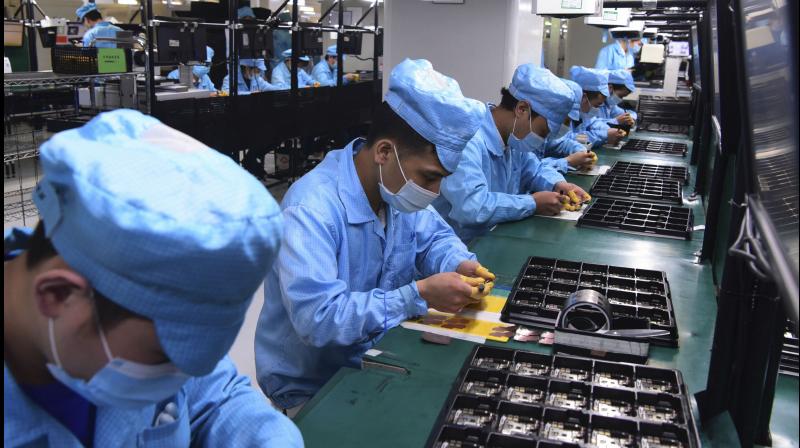 BEIJING: China’s factory activity rose for a third straight month in May as companies got back to business after strict measures to contain the coronavirus were eased, but a deep contraction in export orders means the recovery remains sluggish.

The official manufacturing Purchasing Manager’s Index (PMI) was 50.6 in May, compared with 50.8 in April, official data showed on Sunday, pointing to a gradual recovery in the industrial sector. Analysts had expected 51.0.

The 50-point mark separates expansion from contraction on a monthly basis.

While the pace of expansion in production slowed in May constrained by lacklustre demand, the forward-looking total new orders gauge showed an improvement to 50.9 from April’s 50.2, suggesting domestic demand could be picking up soon.

However, export orders are still contracting at the fastest pace in years, with a sub-index standing at 35.3 in May, well below the 50-point mark.

“The current situations for the pandemic and global economy are stil severe and complex, which resulted in a continued contraction in global demand (in May),” NBS official Zhao Qinghe said in a statement accompanying the data release.

Hammered by the health crisis, China’s economy shrank 6.8% in the first quarter from a year earlier, the first contraction since quarterly records began. Analysts believe it will be months before broader activity returns to pre-crisis levels, even if a fresh wave of infections can be avoided.

While most businesses have reopened, many manufacturers are struggling with reduced or cancelled overseas orders as lockdowns push the global economy into recession. Domestic demand also remains depressed amid increased job losses and worries about a second wave of infections.

Factories reduced headcount for the first time since they reopened, with a sub-index falling to 49.4 from 50.2 in April, the survey showed.

Highlighting the uncertain outlook, the government’s work report earlier this month did not set an annual growth goal, marking the first time China has not set a target since 2002.

Beijing also announced additional fiscal measures to bolster the economy, equal to about 4.1% of China’s gross domestic product (GDP), according to Reuters calculations, its largest stimulus package since the global financial crisis.

Higher spending, particularly on infrastructure, is expected to give activity a solid boost in the second half of the year and into 2021. Steel mills have already cranked up blast furnace utilisation rates to over 91%, according to Mysteel consultancy.