Earlier, minimum income tax rate in country was 10 per cent for an income of Rs 2.5 lakh to Rs 5 lakh. 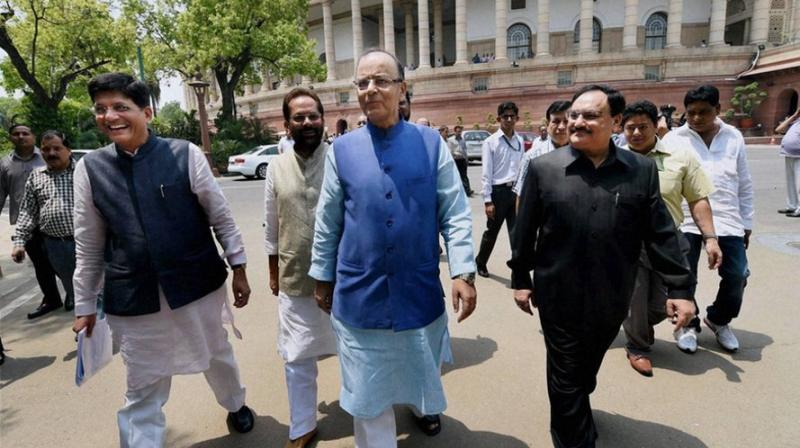 Apart from that, finance minister Arun Jaitley has made it clear that an additional 15 per cent surcharge on Rs 1 crore income will remain in tax bracket. Besides, there would be a 10 per cent surcharge on an annual income from Rs 50 lakh and Rs 1 crore.
Finance Minister listed three major challenges for developing economies in his speech. India stands out in map of world economies despite global turmoil, said finance minister Arun Jaitly. India's Current Account Deficit dipped from 1 per cent to 0.3 per cent in fiscal year 2017-18, Arun Jaitley informed.

Demonetisation was part of a series of corrective steps taken by government over last two years, it was a bold decision, Arun Jaitley said in his Union Budget 2017 speech. "Like all reforms this reform (note ban) broke away retrogade status quo," Arun Jaitley said. Demonetisation also enhanced banks' ability to lend money apart from breaking the bone of shadow economy. Pace of remonetisation has reached its comfortable level.

"Union Budget 2017 was advanced to February 1 to enable Parliament to avoid vote-on-account and go for a single Appropriation Bill," Arun Jaitley said. Our agenda for next one year is to transform, energise and clean India, Arun Jaitley said.

Agriculture: Union Budget 2017 has supported income security to farmers. Arun Jaitley had pledged in earlier Budget that the government would double farmers' income in five years. Target of total agricultural credit for farmers in Union Budget 2017 has been fixed at Rs 10 lakh crore for the year 2017-18. Apart from that, provisions for special package under Fasal Bima Yojana for sowing farmers against any natural calamity has also been made.

"Our mission would be to bring 1 crore rural households and 50,000 gram panchayats out of poverty by 2015," Finance Minister Arun Jaitley said in his Union budget 2017 speech in Parliament. Participation of women in MNREGA was increased from 35 per cent to 45 per cent last year. Highest ever allocation for rural schemes under the program.

Villages: Under Pradhan Mantri Gram Sadak Yojana, on an average 133 km of roads were laid every day. "I propose to allot Rs 1 crore houses for those living in kachha houses in villages. Sanitation coverage in rural areas has gone up by 18 per cent. Safe drinking water to cover 28,000 arsenic habitations in next four years," Arun Jaitley said.

Education: Innovation Fund for Secondary School Education to be introduced. Good quality education institutions, revised framework for credit based programs for education institutions. "Skill India Mission was launched in 2016 to maximise potential of youth. Advanced training, courses in foreign language for youth to enable them seek jobs outside the country," Arun Jaitley highlighted.

Two new All India Institutes of Medical Sciences to be set up in Jharkhand and Bhar.

Social: Special provisions and packages for for pregnant women would also be incorporated. For welfare of women and children, special allocations made in Union Budget 2017. Housing loans have become cheaper due to demonetisation as banks have cut their lending rates. Government has plans to eliminate life threatening diseases like Kaala Zaar, leprosy. Besides, 1 lakh Health Care Centres will be converted into Health Wellness Centres. Amendment to Payment of Wages Act is also a landmark decision of the government, Finance Minister Arun Jaitley informed the Budget Session in Parliament. Aadhaar based smart cards for senior citizens, LIC schemes for senior citizens has been incorporarated in the Union Budget 2017.

India Railways: There will be no separate Rail Budget for the first time in history of India's Budget presentation. Capital expenditure for Railways has been fixed at Rs 1,31,000 crore. Besides, Rs 1 lakh crore corpus for rail safety has also been allocated. Government will lay down clear timeline for elimination of rail accidents. "Unmanned railway crossing to go completely in a few years. As many as 70 new rail projects under consideration. Around 7,000 railway stations would be provided solar power facilities," Arun Jaitley informed.

"Transformative measures have to be undertaken to make Indian Railways competitive," Arun Jaitley informed the Parliament during Budget Session. Competitive ticket booking facilities would be made available. Service charge on booking tickets on IRCTC to be withdrawn. A new Metro Rail Act has been enacted to accelerate projects laying Metro Rail Networks in country.

Transportation: Government has allocated Rs 2,41,387 crore for upgradation of airports in country.

Power: Received over 250 proposals for electronics manufacturing units. Besides, various provisions for encouraging use of solar energy in country.

Financial Sector: Government will continue its reforms agenda for the sector. More than 90 per cent of total FDI is now proposed to is through automatic route. Online application for FDI has boosted foreign investments into country. "Further liberalisation of FDI policy is under consideration." Arun Jaitley informed in the Budget Session of Parliament. Foreign Investment Promotion Board to be abolished.

Markets: Measures to safeguard poor investors from scrupulous schemes that dupe investors of thousands of crores of hard earned money.

Tax proposals: India's tax to GDP ratio is very low compared with other developing economies. Direct Tax collections not commensurate with income and consumption patterns of taxpayers. Indirect Tax collections also not up to the mark set by government. Number of people showing more than Rs 50 lakh income is only 1.72 lakh.

"We are largely a tax non-compliance society. Tax evasion overburdens honest tax payers," finance minister Arun Jaitley said while speaking in Parliament. After demonetisation large amounts of deposits were made in banks across country.

Government to take to data mining process of all transactions done after demonetisation to weed out black money and unaccounted wealth. Net tax revenues expected to grow at a higher rate of 17 per cent in 2017-18. Around 34.8 per cent income taxpayers revealed their income due to demonetisation.

Political Funds: There has been no transparent mechanism on funds for political parties despite India being largest democracy in the world. Records of donations over Rs 20,000 to any party in cash were to be maintained. Measures to streamline political fundings in India have been accelerated.

According to proposals by Election Commission, maximum amount of fund for a political party has been proposed at Rs 2,000. Funds to be received either in cash or through cheques from donors. Electoral bonds for political donors. Every political party would be required to file returns in a time frame. "The reform will bring greater transparency in political funding," Arun Jaitley said.

Union Budget 2017 broke its decades old tradition of holding a separate Rail Budget in Parliament during Budget Session. From this fiscal year onwards, Rail Budget will be part of General Budget.