Government successfully reduced inflation rate to 4.5 per cent from 10 per cent. 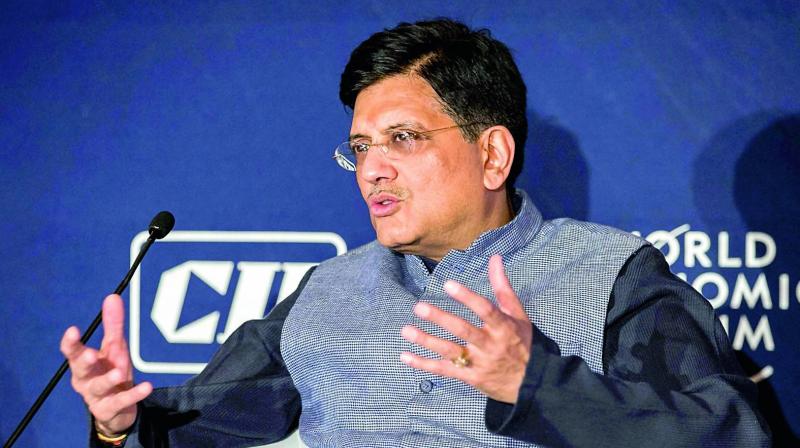 Piyush Goyal also praised PM Modi's way of doing his work continuously, and to take development to every single person across the field. (Photo: PTI)

New Delhi: Praising his government’s work in the last five years, the interim Finance Minister Piyush Goyal presented the vote-on-account Budget on Friday, in a last ditch bid to woo the electorate with several popular measures.

Blasting away the opposition, the interim finance minister Piyush Goyal demanded an answer from the opposition, and asked why the Congress never cared for the healthcare of the farmers like the National Democratic Alliance (NDA) did. Why the Congress never cared about establishing electricity in every nook and corner of the country, like the Bharatiya Janata Party (BJP) did.

Piyush Goyal, who is also in additional charge of the railways, and coal and fuel ministry stated, the income support to the farmers will be seen as an additional income, instead of Rs 500 income per month. The interim finance minister also added, the farmers are our food provider, and food security provider, so it’s difficult to establish how much important is this Rs 6000 in the life of a small farmer.

Interim finance minister Piyush Goyal dictating one of many priorities, said the outgoing government aims to execute irrigation through micro irrigation route and organic farming which takes much less water. Goyal lastly added, in the upcoming 10 years, the government will ascertain that everybody gets the benefit of good irrigation facilities

Stating the benefits of the new tax slab, the interim finance minister Piyush Goyal said, about 3 to 3.5 people will get benefits from the new tax slab. The incumbent railway minister said, the final data will be availed after the final tax returns for the next year will come. Although, there have been no changes in the tax rates. The outgoing government only made one change – Persons having an annual income less than Rs 5 Lakh will have to pay zero tax.

Interim finance minister also added if there is huge tax collection, it shows that GST has been successfully executed, and implemented. GST has moved the nation towards rapid development. Goyal also stated, this was the first large scale change in the history of independent India, and it's obvious that if it this is implemented there will be a few difficulties. However, the railway minister also thanked the tax payers, and as well as those working in business sector for their compliance with the GST implementation, and for which they are getting direct benefits now.

Piyush Goyal also praised PM Modi's way of doing his work continuously, and to take development to every single person across the field. He also said that work is not done in small parts, but is done on a large scale successfully with honesty. It is a chain of work that has been done in the last 4 years.