Finally, it falls to the farmer to rescue salvage India's parlous GDP

Growing at 3.4%, farm sector may be a safe haven for millions of corona refugees from urban India 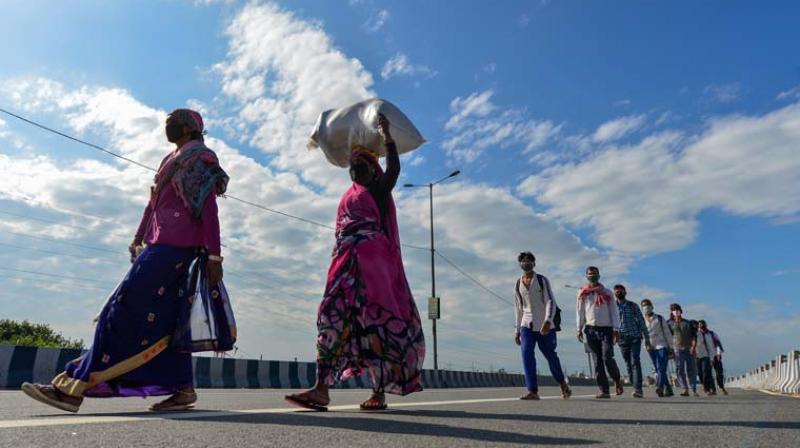 The latest GDP data released by India indicated a steep contraction of 23% in the economy. (AP file photo)

New Delhi: The release of GDP data for the corona-disrupted first quarter of 2020-21 on Monday came as a shocker despite the foreboding there had been for weeks earlier.

The steepest decline ever in GDP growth, despite efforts to prevent it by both government and Reserve Bank, signals that India’s economic recovery is bleak with millions of jobless and businesses on the path to bankruptcy.

That is a contraction of 23.9 per cent where there had been growth of 5.2 per cent in the same period last fiscal.

It is the sharpest contraction since India started publishing quarterly GDP figures in 1996. It basically says India's economic activities stand crippled following the nationwide lockdown that was imposed in March to tackle the spread of Covid-19.

Reacting to the data, chief economic adviser (CEA) K V Subramanian tried to put a spin on it. "We are witnessing a V-shaped recovery as the economy unlocks E-way bills at 99.9 per cent vs August last year despite local lockdowns. This will continue. Once the Unlock phase was undertaken, the decline has been progressively lower. The trend is one of a V-shaped recovery," he said.

The positive news is that the annual growth of the farm sector stood at 3.4 per cent in the April-June quarter, giving some hope that the rural economy will be able to support millions of migrant workers who have returned to their villages during the lockdown period.

Reacting to the data, economists said the numbers were in line with what was indicated. "Investment growth has been going down for quite some time and investment growth slowdown is understandable in this environment. The issue is what will revive first: investment or consumption. We assume investment will stay weak. We expect to see consumer behaviour changing," said senior economist DK Joshi of Crisil.

Even as the first half of the current fiscal is expected to remain weak, India Inc, however, expects a recovery in the second half led by supportive fiscal and monetary policies.

"We have already started to see a discernible improvement in many high-frequency indicators, which are expected to pick-up further, going forward. In this context, the localized lockdowns being imposed by state and district administrations may be avoided so that economic recovery can be kept on track," said Chandrajit Banerjee, director-general of CII.

Even before the pandemic struck, the Indian economy had been experiencing a slowdown, growing only 4.2 per cent in FY20. The government in May announced a Rs 21 lakh crore stimulus package to tackle the economic fallout of the pandemic. The steps attempted to minimise the economic impact of the pandemic and provide a cushion to deal with the lockdown.

Most of the announcements made so far, attempt at restarting the economy with reforms on the supply side. The relief package provided immediate relief in the form of tax deferrals, cash transfers for the poor, and regulatory forbearance. As part of the package, the government also announced credit guarantees for micro, small and medium enterprises (MSMEs), transfer of foodgrain to the poor, regulatory changes to prevent bankruptcies, among others.