Business   Economy  02 Jun 2020  India will definitely get its growth back, path to that is Atma-nirbhar bharat: PM Modi
Business, Economy

India will definitely get its growth back, path to that is Atma-nirbhar bharat: PM Modi

Speaking at CII's Annual Session, he called on India Inc to rise to the occasion and partner rural India in these testing times 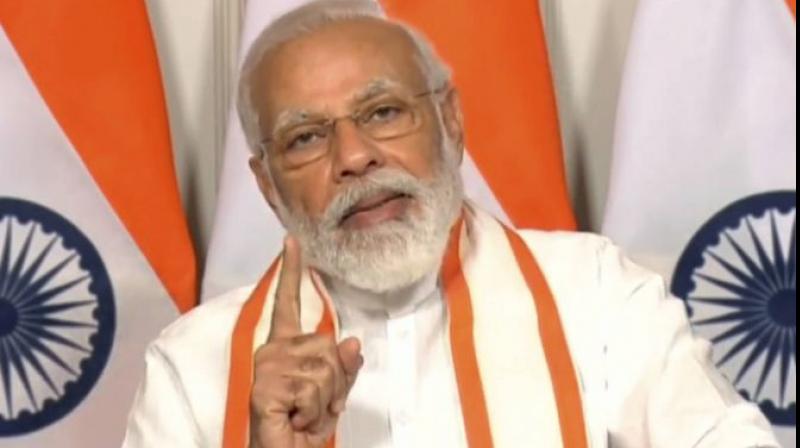 Prime Minister Narendra Modi addresses the annual session of the Confederation of Indian Industry (CII) on its 125th anniversary via video link, in New Delhi, on June 2, 2020. (PTI Photo)

New Delhi: A day after Moody's downgraded India's credit rating to a notch above junk status on growth concerns, Prime Minister Narendra Modi on Tuesday asserted that the country will definitely get back its economic growth and said reforms undertaken during the lockdown will help the economy in the long-run.

Pledging to undertake more structural reforms that will change the course of the country, he explained the concept of Atma-nirbhar Bharat or Self-reliant India - one where products are Made in India for the world and a nation that is not dependent on others in strategic sectors.

"Getting growth back is not that difficult and the path to that is Atma-nirbhar bharat," he said.

Self-reliant India means the country will embrace the world by becoming stronger. "Atma-nirbhar bharat will be fully integrated with the world economy and also be supportive."

"We have to invest in the robust local supply chain that can strengthen India's participation in global supply chain," he said. "There is a need to create products that are Made in India and Made for the World."

Self-reliant India is about cutting down imports, improving productivity setting targets, and not relying on others in strategic sectors, he said.

"It is about creating strong enterprises in India. Enterprises that can become global forces. It is about generating employment. It is about empowering people to come out and create solutions that can define the future of our country."

Speaking at CII's Annual Session, he called on India Inc to rise to the occasion and partner rural India in these testing times.

"We have to save the lives of citizens while also stabilise the economy and speed up growth," he added.

Indian industry, he said, has started talking about 'getting growth back'.

"I will go beyond getting growth back to say Yes! We will definitely get our growth back," he said expressing confidence in Indian farmers, small businesses, and entrepreneurs for helping achieve that.

Meanwhile, Moody's Investors Service on Monday downgraded India to the lowest investment grade level and kept it on a negative watch. This because the country faces a prolonged period of slower growth relative to its potential and rising debt.

It joined S&P Global Ratings and Fitch Ratings in predicting the first contraction in GDP in over four decades and a fiscal deficit blowout as the coronavirus pandemic spreads.

Reforms, he said, means the courage to take decisions, and take them to their logical conclusion. The government is trying to create a facilitative ecosystem for private enterprises, he said.

During the lockdown, the government opened up non-strategic sectors to the private sector. It freed up the coal sector by allowing commercial mining and allowed the private sector to invest in sectors like space and atomic energy. Also, long-pending labour reforms are being undertaken.

To get back on the growth path, the country needs to focus on intent, inclusion, and infrastructure.

India, he said, can increase exports and create jobs in furniture, air-conditioning, leather and footwear sectors.

After more than two months of the world's most expansive lockdown, the country has entered 'Un-lock Phase-one'.

"Under Un-Lock Phase-one, a large part of the economy has opened up," he said adding the lockdown had been effective in controlling the spread of coronavirus.

Stating that strengthening the economy was among the highest priorities of the government, he said the decisions taken since March will help the nation in the long-run.

On government measures to deal with the fallout of lockdown, he said Rs 53,000 crore financial assistance in the form of free ration to poor and migrant workers, and cash to poor women and aged people has been provided. Over 8 crore poor households have been provided free cooking gas.

Also, steps have been taken to bring relief to farmers via an amendment to the Agricultural Produce Market Committee (APMC) Act. Farmers will now get the right to sell their produce on their own terms, he said.