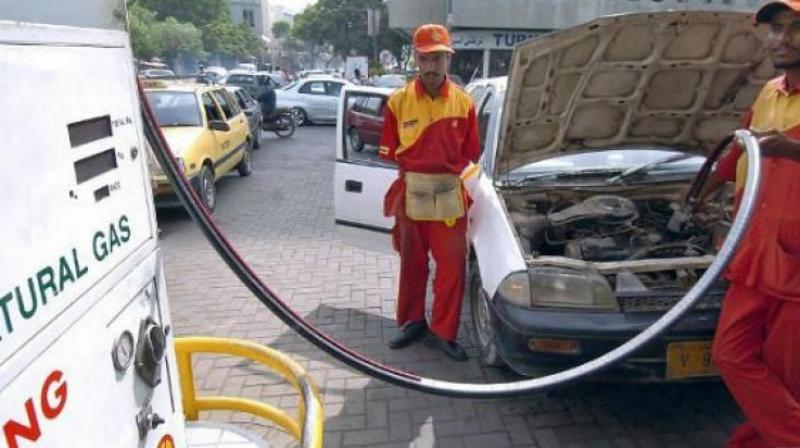 New Delhi: Compressed Natural Gas price in Delhi and its suburbs was on Wednesday hiked by about Re 1 per kg, the seventh increase in rates in 15 months.

Indraprastha Gas Ltd, the sole supplier of CNG to automobiles in the national capital region, said the increase was warranted because of "recent changes in transmission tariffs of gas pipeline."

CNG rates in Rewari, Gurugram and Karnal in Haryana have been raised by 95 paise. "The price of CNG being supplied by IGL in Gurugram and Rewari would be Rs 58.45 per kg and in Karnal, it would be Rs 55.45 per kg," IGL said in a statement.

This is the 7th increase in CNG prices since April 2018. CNG price was last hiked in April by Re 1 per kg because of the rise in the price of domestic natural gas and fall in rupee value against the dollar.

IGL, however, did not raise the price of piped natural gas it supplies to households in these cities for cooking purposes. Piped natural gas (PNG) currently costs Rs 30.50 per standard cubic meter in Delhi and Rs 30 in Noida, Ghaziabad and Greater Noida.

Rates of CNG and PNG vary in different cities due to the incidence of local taxes.

IGL said it will continue to offer a discount of Rs 1.50 per kg in the selling prices of CNG for filling between 12.00 am to 6.00 am at select outlets in Delhi, Noida, Greater Noida, and Ghaziabad.

The revision in retail prices of CNG has been effected after an increase in transmission tariff of gas pipeline and an increase in operating expenses since the last price revision.

IGL sells CNG to over 10.5 lakh vehicles in the national capital region through a network of over 500 CNG stations. It also supplies PNG to over 11.20 lakh households in Delhi and NCR towns.