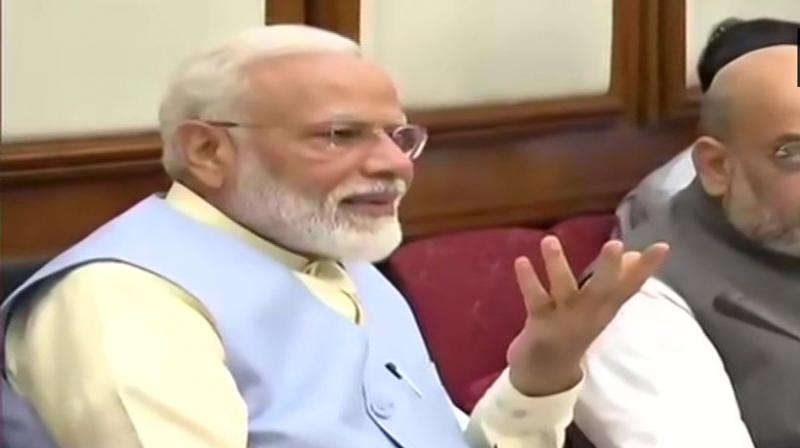 In recent years, India has managed to rein in the budget deficit, mostly through higher fuel taxes and subsidy cuts. (Photo: Twitter/ ANI)

Bengaluru: Government will turn on the fiscal taps in the federal budget on Friday and revise its borrowing target slightly higher for this year and next, prompted by a slowing economy and weak jobs growth, a Reuters poll of economists showed.

After winning a second term by a landslide a little over a month ago, Prime Minister Narendra Modi’s government’s first budget since then is forecast to echo an interim budget from February in borrowing to spend more on social welfare.

The median forecast in the series from the June 28-July 2 poll of over 45 economists showed the government will revise its fiscal deficit target up to 3.5 per cent of gross domestic product (GDP) for the current fiscal year and 3.3 per cent for 2020-21.

That is up from 3.4 per cent and 3.0 per cent, respectively, projected in the interim budget.

However, the most common reply provided by forecasters for fiscal 2019-20 was 3.4 per cent, followed by the highest forecast of 3.6 per cent, suggesting scope for some surprise when newly-appointed Finance Minister Nirmala Sitharaman tables her budget on Friday.

“Our view is that Sitharaman will announce loosening measures and relax the deficit targets for this year and next,” said Shilan Shah, senior India economist at Capital Economics.

“With government debt levels already high, by emerging market standards, that might cause bond yields to rise slightly. But this would be a better outcome than making revenue assumptions that lack credibility and force the finance ministry to relax the deficit targets further down the line.”

In recent years, India has managed to rein in the budget deficit, mostly through higher fuel taxes and subsidy cuts. But the concern now is how Sitharaman will maintain fiscal prudence when tax revenues have shrunk more than previously expected.

The fiscal deficit is already over half the budgeted target for the current fiscal year, which started only two months ago, and the implementation of pre-election promises is set to widen it further.

Around 60 per cent of economists, 21 of 37, who answered an additional question about the focus of the budget said it would be more on fiscal expansion than prudence.

But when asked if the government will also try to limit borrowing to the 7.1 trillion rupees (USD 103.1 billion) pegged in the February interim budget, a two-thirds majority, 25 of 38, said yes.

While the expected rise in fiscal slippage is minimal, a majority of economists also forecast the government to increase spending by routing expenditure outside the budget, often called “off-budget expenditure”, to project better fiscal discipline.

“If you tally up off-budget spending, the true fiscal deficit will be higher. For fiscal 2018-19, our estimate is near 5 per cent,” said A. Prasanna, chief economist at ICICI Securities Primary Dealership.